Advantages and Disadvantages of a Mixed Economy

A mixed economic structure is considered the most successful system for several reasons. Combining the elements of both the private and public sector enterprises, a mixed economy allows business more freedom. While it differs from the market, and command economy, the advantages and disadvantages of a mixed economy also differ.

Protecting private property, allowing the free market, and determination of prices through supply & demand are some of its characteristics. Before contemplating what a mixed economy is, it’s important to go through the pros and cons of a mixed economic structure.

What is a Mixed Economy?

A mixed economy consists of the features Command Economy and Free Market Economy. That being said, both government and private businesses have a win-win situation. There are characteristics of both capitalism and socialism found throughout the socioeconomic system.

Where private businesses can protect their property, the government can interfere with economic activities to achieve specific social goals. The United States and most of Europe are the best examples of a mixed economy. Companies can set prices and allow workers to broker their wages in the US.

Also, there is also government intervention in the form of antitrust laws and minimum wages. They can also correct for systemic disadvantages through safety nets such as social security and the allocation of government resources to public goods.

What are the advantages of a Mixed Economy?

Since there are combined features of a market economy and a command economy, there are certain advantages of a mixed economy to the society, private businesses, and the government.

One of the greatest advantages of a mixed economy is that the private sector can participate in the business and grow its scope. They can generate profit by creating goods and services for societal needs to gain personal benefits as the government doesn’t have a regulatory role.

The approach used in a mixed economy tends to balance the need for private innovation with massive support from the government. Small business enterprises have limited purchasing power.

However, the government can purchase on a massive scale to ramp up the production and balance the supply and demand chain. The government can introduce subsidies or policies to help a certain industry and encourage them to serve consumers.

3. More Employment is one of the key advantages of a mixed economy

Both private companies and government can produce higher revenues; more job opportunities are available for individuals. Given that skilled workers can apply for incentive-based jobs, their living standard also betters.

On the other hand, governments hire more workers when there are more public-sector opportunities. Therefore a mixed economy creates more jobs than a command or market economy from both ends.

The government aims to provide equal chance to everyone in society while the private sector helps individuals grow at a personal level. Both sectors join hands in creating a social net to catch those who might fail. If someone fails in a true market economy, they face a high risk of entering poverty and never bouncing back.

In a rare case, if someone enters poverty in a mixed economy, they will still have access to resources that someone in a market economy would not have to put their life back on track. It's considered one of the biggest advantages of a mixed economy.

5. Plenty of opportunities for businesses

In a command economy, private businesses cannot utilize their skills to accelerate the business. But in a mixed economy, business owners and their employees leverage the ability to achieve success through their hard work and innovative tactics. Since the government’s actions as a mediator, individuals can pursue most business ventures with a minimal level of supervision or intervention.

Workers can choose their job positions and get paid accordingly. On the other hand, instead of having those roles dictated by the government, employers take the crucial business-related decisions encouraging innovation because there is competition within the market. Since there is high competition between both private and public sectors, the level of efficiency remains high.

What are the Disadvantages of a Mixed Economy?

1. Higher tax rates are among the disadvantages of a mixed economy

Despite being beneficial to private and public sectors, there is a concerning disadvantage of a mixed economy: higher tax rates. This is because governments operate through taxes and revenue coming from their chartered companies.

Individuals and private companies are taxed at various levels based on their income, due to which fewer profits are obtained. Currently, the US and European countries are among the highest income tax paying countries.

2. Less competitive members of society may not get support

The primary problem of a mixed economy involves the members of society who cannot get to the same levels of innovation or competition. When the market has too much freedom, the vulnerable or weak individuals might find themselves without any support from the government.

This common disadvantage of a mixed economy creates a wealthy system, and the poor get poorer. As the stronger ones gain more power over weaker sections, they can easily extend their positions to not lose them.

3. Incorrect management may lead to Poverty

The mixed economic structure works when all the entities provide checks and balances for one another. If one receives a bigger share, another one will get less. The imbalance continues to exist until there is a correction made in the system.

For example, the richest section of the US society owns 40% of the country’s wealth. Still, less than 40% of households are classified as being in the Middle Class, which is one of the lowest rates of any developed country.

Although the mixed economic system works with a collective effort of the government and private sector, there is a high vulnerability of the powerful taking more of the government’s advantages. Instead of doing what is required for the benefit of society, the government intervenes based on the influence of the highest bidder.

5. Wastage of money and Corruption

Not all the funds allocated to different projects in the public sector go to the right place. Intermediaries are the ones that take some part of the funds as their commission. That being said, there is a misuse of resources, one of the major disadvantages of a mixed economy.

In addition, corruption and black marketing roots up whenever there is an imbalance in this system. Political parties and self-interested people still take advantages of the public sector, which leads to a rise in the practice of black money, bribe, tax evasion, etc.

Conclusion on advantages and disadvantages of a mixed economy

The main motive of a mixed economic structure is to bring both the state and private enterprise to harmony. Many developed nations flourish following this economic structure. The Advantages and disadvantages of a mixed economy are most important to understand when it’s about finding the strength and the weaknesses of this structure. This type of economy may get out of hands when either the private or the state overtakes the other. 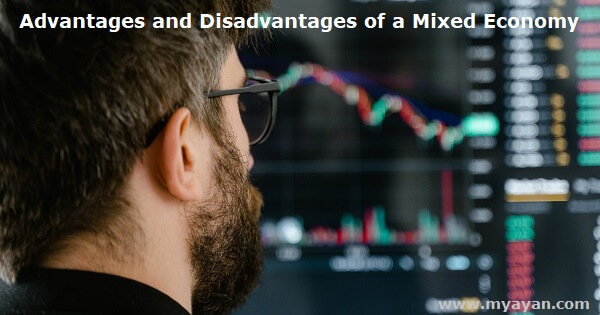 What are some disadvantages of a mixed economy?

What is the advantage of mixed economic system?

Why is a mixed economy better than a purely free market economy?

A mixed economic system protects private property while allowing for a certain amount of economic liberty in the use of capital. Still, it also allows governments to regulate economic activities to achieve social objectives.

What are the reasons why mixed economy is better than traditional economy?

Mixtures of economies typically safeguard private property. They generally allow for setting prices in a free market manner, not by government intervention or artificial price controls. Because of its architecture, mixed economies encourage economic activity driven by private self-interest and incentives.

What is it like for a teenager to live in a mixed economy?

A mixed economy influences teenagers. Employment would be affected. There are rules for employment in a mixed economy, such as child labor and safety standards. We could have engaged in child labor due to a lack of enforcement and continual demand for more work in a capitalist economy.