Advantages and Disadvantages of a Franchise

Knowing the Advantages and Disadvantages of a Franchise are the preliminary steps to consider buying or owning a franchise. Money gets you money; rather than setting up a new company, buying a franchise seems a viable option in terms of a business plan, expenses, and time. But how does it turn out, and what are the pros and cons of franchising?

What is a Franchise?

A franchise is a legal and commercial relationship/bond between a company's owner and an individual who opts to start a business using the predesigned business' trademark logos and business model.

The franchisee sells the product or service that the franchisor provides. According to the US Government report, around 21 million people are employed in the franchise industry till 2018. The industry alone generates $2.3 trillion of economic activity.

What are the Advantages of a Franchise?

As a business entity, a franchise can be a lower-risk way to start a small business. With several advantages, it is often the choice for individuals starting a new business to mitigate the risks associated with going out independently.

2. Working with a Known Brand

Working with a well-known and established brand is probably one of the most significant advantages of franchise. It allows a franchisee to leverage the already established brand of the business. This means there is far less effort and cost involved in establishing and building the business's brand. It’s already known and trusted by the consumer market and therefore produces a constant stream of brand-loyal customers.

Yet another advantage of franchises is the fact that acquiring business finance is generally easier. Investors are far more willing to invest in a business with an established network, secure brand and effective support structure. In some instances, finance may be acquired from the franchisor, making life even simpler for the new business.

As a franchisee, you can take advantage of the relationship with the franchisor and grow yourself by binding with them professionally. All in all, relationships with suppliers and distributors is already in place and easy to manage. Building business relationships with the marketing teams and advertisers on the offset can also benefit your business.

The growth of the franchise industry is a real-life example of how successful this business structure is. When you buy a franchise, you are buying an already established concept that has been successful before. Franchises stand a much better chance to succeed in an ever-growing market than independent start-up businesses. Also, the franchise's security can give the impression that the business will be less likely to fail.

What are the Disadvantages of a Franchise?

Just like every other business model, there are some disadvantages of Franchising too. Franchising is beneficial, even so starting business from scratch or under a sole proprietorship are way similar to starting a franchise. Here are some potential risks of franchising.

The main disadvantage of franchising is that you must abide by the franchisor's rules and guidelines to maintain the relationship. There are other conditions that the franchisor may impose on you. On the other hand, there are no such issues with a sole proprietorship. Under a franchise, you are bind to perform operations as per the franchisor’s discretion as mentioned in the agreement.

Since most of the business is controlled by the Franchisor as per the agreement, a franchisee has no or partial control of the business. Thus, as a franchisee, you’ll never be able to utilize your skills to navigate the business with no or little control. The rules of the business are already established by the franchisor that operates it in accordance to the same and Franchises are least likely to intervene.

Costs and a share of income is one of the concerning disadvantages of a Franchise. Besides paying the original franchise fee, you are also bound to pay a percentage of royalties to the franchisor each month. The franchisor owns the rights to charge additional fees for services they provided such as for marketing. Also, the bigger the brand is, the higher is the cost of franchising. You will need to provide a large sum of money upfront to franchise a brand.

Certain Risks emanate in this business model which are the serious disadvantages of a franchise. The franchisor doesn’t offer any guarantee or protection to the franchisee against business failure. Once an agreement is made, it’s up to the franchisee to take the responsibility of reaching the market and generate profits.

On the other hand, if other franchisees did something to taint the reputation of the franchisor, this would also affect your own business. This could potentially damage your sales and overall profits.

Purchasing a franchise is like buying any business in which you have to investigate the franchise fully before doing anything else. Prepping yourself with the initial costs and selecting the right franchise can be the keys to hit the button. As with the other business models, the advantages and disadvantages of the franchise must be balanced before launching it. 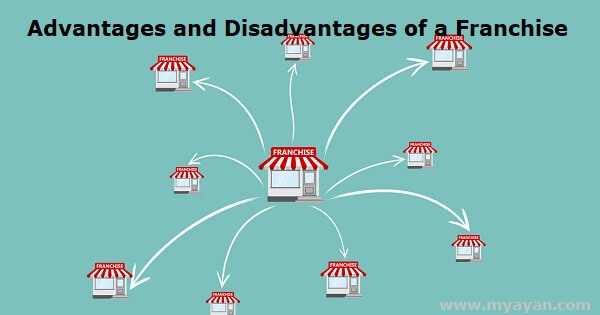 What are disadvantages of franchising?

Why Are franchises Bad?

The allure of a franchise entices many entrepreneurs. Isn't it true that you have a better chance of success if you join a firm with a reputation for success? Not quite. Franchises may come with many issues, including reduced income, dissatisfaction, and turnover among owners.

The first step is to calculate your initial investment. The brand and sector influence your earnings potential as a franchise owner. In the restaurant business, franchisees make an average of $82,000 per year, which is quite reasonable when compared to non-franchise restaurant owners who may earn anything from $24,000 to $155,000 each.

Can anyone be a franchise owner?

It's not just about how well you run a business; it's also about how effectively you work on the company. Still, not everyone is suited for being a franchisee, which can be stressful. People are unique, as are franchises.