Advantages and Disadvantages of Capitalism

Running businesses within the limits of Capitalism can have both advantages and disadvantages for people. This type of economy can be helpful for the state in terms of growth, choice, and freedom. But knowing all the sides of it is also important. The Advantages and Disadvantages of Capitalism highlight the pros and cons from the viewpoint of social welfare and development.

What are the Advantages of Capitalism?

Since Capitalism is based on private ownership both in production and operations for profit, it has many advantages for private businesses. Capitalism characteristics include capital accumulation, competitive markets, pricing system, recognition of private property, and wage labor. The private owner of the capital makes decisions regarding investment and price distribution. Besides generating profit, these advantages of Capitalism also relate to society.

In a market structured on capitalism, consumers get to choose what they want depending on a wide option availability and competition among service providers. Such advantages of Capitalism are beneficial for the consumers and give individuals to innovate new ideas to serve the consumers better.

The consumers usually buy goods that are affordable and the best in quality. This is usually something that a socialist economy doesn’t have.

Also, to balance the demand and supply curve, the providers don’t produce goods in surplus numbers. It creates an opportunity to find new methods to cut costs so that price is a competitive factor in the mind of a consumer.

Innovation enhances the quality of the goods, which eventually increases the demand in the market. Such demand will also drive consumers and encourage more purchases.

As a consumer’s life improves because of the products purchased, there’s an option to improve their living standard over time. This, in return, escalates the GDP value given that the Private enterprise can use economic resources more efficiently than the public sector.

Fixing the product's price as per the consumer's demand is one of the advantages of Capitalism. There is no intervention from the Government or fixing prices, and Capitalismfocuses on goods and services for consumer needs. The pricing factor generally depends on the demand for that product or service.

Inventories can fluctuate on higher or lower based on the market needs entirely. Also, Capitalism provides opportunities to consumers to choose whatever items they need in the best possible way. The government cannot decide what consumers must have or how much they need to pay for it.

5. Fair Price is one of the main advantages of Capitalism

There is the free operation of the marketplace where much freedom is given to consumers to choose the goods and services. The pricing depends entirely on supply and demand. This advantage of Capitalism extends to the other elements of investing and money management.

The prices for stocks, bonds, mutual funds, including currencies, are driven by consumer activities and their business response. The Government’s only role to play is to regulate the rules of a fair pricing system.

What are the Disadvantages of Capitalism?

Along with the advantages come the disadvantages of Capitalism that can affect the consumers directly or indirectly. Since wealthy individuals operate the market, it can easily be guessed who will eventually have more profits.

1. Misuse of Power is one of the disadvantages of Capitalism

Most powerful business is likely to gain control of the market as Capitalism is structured by wealthy players. They may take over the competition overshadowing the rest of the competitors. Furthermore, higher wealth and better access to market resources are their tools of market research and development.

Even if a small player comes up with better products, the big company can purchase the rights to the product or buy the new venture to gain control. This gives birth to a monopoly of power if rules are not put in place to control the situation.

It’s all about generating profits, and the company with more wealth and resources will tend to remain in charge of the market if they passed it on to their successors. This could be one of the leading disadvantages of capitalism as the rich will get richer, while the poor will continue to struggle to make ends meet.

Having money means even if the struggling companies have innovation or leadership skills, they would never get a chance to earn as much as the bigger players do.

The capitalist economy is much focused on profit generation. Companies may overlook the detrimental effects of doing business in the surroundings to make more money. Even though considering innovative methods is easy, business owners may sideline this factor and heed to mass production to balance the demand and supply.

This may harm the environment and also lead to environmental concerns. For instance, leading companies in the capitalist economy hire cheap labor and force them to work extra hours to boost production.

It’s the consumers who decide the fate of a Capitalist economy. This type of economy works only where customers are active in purchases. If the consumers decide to save their money instead of spending it on goods and services, this capitalistic approach struggles to survive because of not driving profit.

The businesses will either fail or discontinue due to a lack of buying or selling activities. By purchasing something, each member of society contributes to the employment of everyone else.

Productivity is the basis of success for every company in a capitalist economy if a skilled worker is hired at an hourly rate of $15. At the same time, the other unemployed person is willing to do it at a lower rate.

One of the major disadvantages of Capitalism is that this type of economy pushes people to balance the value of their productivity with the overall wages they need for survival. This limitation of Capitalism leads to economic decline over time as many people are employed at lower wages.

Final Statement on the Advantages and Disadvantages of Capitalism 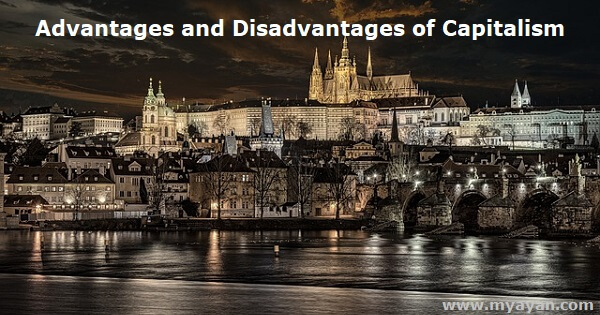 What are 3 disadvantages of capitalism?

What are the four advantages of capitalism?

There are advantages to capitalism, including innovation, choice, and competitiveness. It's also possible that a free market would not invest in itself until it produces profits.

What are the negative effects of capitalism?

What is criticism of capitalism?

Accusations that capitalism is inherently exploitative, alienating, unsustainable, produces staggering economic inequality, commodifies people, is anti-democratic and promotes the erosion of human rights are among the most common complaints about capitalism. At the same time, it encourages imperialist conquest and conflict.