Advantages and Disadvantages of Cryptocurrency

Cryptocurrency is the new mode of conducting instant payments and bulk transactions. People have invested more in the digital market than the stock exchange considering its current and future value. No doubt that it’s one of the greatest inventions of the digital era, but how well digital currencies fit in the real-world scenario? Advantages and Disadvantages of Cryptocurrency highlight the possible benefits and risks of something you can’t have physically.

It’s a digital coin that you can save in your online repository rather than having in your wallet. Cryptocurrency is similar to the real money you have in your bank that you can use for online shopping and payments. It’s a type of currency that doesn’t have any shape or physical form.

The only difference are that it’s not linked or approved by any bank, and nobody knows who invented it or from where it was originated. People use cryptocurrency worldwide due to its increasing value. Since no banks are involved in the blockchain business, the transactions are verified by network nodes through cryptography and recorded in public distributed ledger called a blockchain.

Advantages of Cryptocurrency Use

The first cryptocurrency was Bitcoin (BTC), released in 2009 by an individual or a group named Satoshi Nakamoto. Nobody has any information about who this person or group is. The only thing people know that it’s gaining on higher value day by day compared to USD and Sterling pound.

Millions of users transact through this mysterious Peer-to-Peer Electronic Cash System every day due to its advantages. Hundreds of websites help users convert Cryptocurrencies into real money and transfer it to their bank account. The best part is that these websites also provide real-time exchange rates to blockchain investors. Here are some reasons why it’s happening worldwide.

1 BTC equaled 59,000.10 United States Dollar on 1st of April 2021, a substantial shift in its value within a year's gap (approximately 50,000 USDT). Seeing its potential value in the future, investors have opted to put their money into the Cryptocurrency market, and many are planning to enter the market speculating fast and easy returns.

2. Cryptocurrency is Self-governed through blockchain

There are no governments involved in the blockchain where the currency traverses peer-to-peer. The cryptocurrency was developed considering there will be no intervention from any banking authority.

All the cryptocurrency transactions are stored by developers/miners (brokers) on their hardware, and they get the transaction fee as a reward for doing so. There are no taxes, just a little portion deducted as commission for every deposit or withdrawal.

Digital currencies have always under the lens due to security and privacy concerns. A blockchain is a ledger designed using different complex mathematical riddles, which are hard to decrypt.

Cryptocurrencies use pseudonyms that are unconnected to any user, account or stored data that could be linked to a profile. Blockchain network is stable and highly protected by encryption methods and logics, making it more prominent than ordinary digital transactions.

One of the biggest advantages of cryptocurrency is it’s mainly decentralized. Many cryptocurrencies are owned by the developers, individuals, or organization who have a significant amount of it to develop it before releasing it into the market.

Decentralization keeps the currency monopoly free and moving so no individual organization can manipulate the flow and the value of the cryptocurrency. This, in turn, keeps the blockchain market more stable and secure. Cryptocurrencies are unlike fiat currencies which the government controls.

The ability to transfer money to another country instantly is one of the major benefits of using cryptocurrencies. Usually, it takes around a week if you transact through traditional payment methods. Even the transaction or processing fees are negligible if you pay through cryptocurrency such as bitcoin as there are no third-party involvement.

As predicted, a maximum of 21 million coins can be created or “mined.” Around 18.5 million bitcoins have already been mined, which means there are less than 3 million left. The rate of production of bitcoins will slow over time through halving. In 2009 a single block mined was worth 50 bitcoins, but now, it’s worth 6.25 bitcoins.

The blockchain market is independent of inflation or decline in the value of paper money or precious metals. The demand for cryptocurrency kept increasing during the COvid-19 pandemic. With the rising demand, the value of cryptocurrency will also increase, ensuring its long run in the future market, whatever the situation may be.

Possible Disadvantages of Cryptocurrency Use

It’s comprehensible that the only thing we know about cryptocurrency is that it originated through China's source code by a single person or a group. The anonymity poses several questions on legitimacy along with several other concerns.

1. No security against loss

With individuals and groups of investors getting more and more attracted to cryptocurrency, there is an emergence of offshoot websites and scammers. You never know who can lure your money and cheat you using a Ponzi scheme in the name of blockchain.

It's easy for those treating coins as real money to handle the investment using standard security protocol. However, those using it to buy, sell, or betting online, need to be cautious of their investment. You can find plenty of websites that attract you through old-school offers and signup bonuses. They can easily fetch your confidential details and misuse them.

There is no authority or government involved in the blockchain except for some individuals and the source code. Given that the security is tightened by high-end encryption and defense mechanism, the governments can’t track illegal funding or money flows.

Bitcoin is the most accessible mode of transacting money for illegal businesses. It’s an easy way for fraudsters to get away with any unlawful activities like running fake calls and converting the money white from black.

3. Losing your Data Can result in huge financial loss

Blockchain is backed up by solid source code that is impenetrable for anyone unless they are highly advanced. The developer group had an intention to create untraceable codes that’s also hack-proof.

Investors have opted for cryptocurrency primarily because of safety reasons. It can be stored online rather than in a bank vault and is immune to physical damage. But, what if a user loses access to his account access or the private keys. This would result in a substantial financial loss.

4. There is still someone behind the code

Even if the blockchain network is decentralized means, no individual has control over it. But there is someone who developed the source code even if it updates itself. Some big hidden players control the flow of currency behind the screen.

They can manipulate the coins when they think it’s the right time to hit the global economy. Worldwide investors would lose a big chunk of their hard-earned money within seconds if things go wrong.

Protocols and complex codes perfectly secure the digital age currency, but how safe are the investors at their ends is a big question. Most exchanges and websites store users’ wallet data to use their ID in the future.

This data is vulnerable to hackers, and one can easily break into a user’s account to bring more damage. Once hackers have your details, they get to decide what to do with your coins. Maybe it’s time to reconsider the incidents from the past, such as Bitfinex and Mt Gox.

Before stepping into the cryptocurrency market, it’s better to derive the scope and possible risks of investing your money. Provided there are return or cancellation policies, start by contacting someone who has had already generated income and profits. There are plenty of potential advantages and disadvantages of cryptocurrency investment. How long this currency dominates the world is still unpredictable. Who programs the codes is still a question. 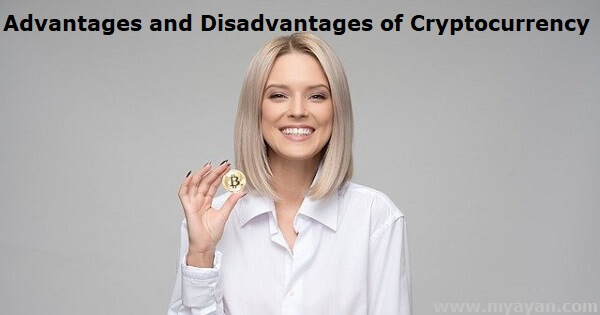 What is the advantage of cryptocurrency?

One of the major advantages of cryptocurrency is that it can be used to exchange money between two people. This can be done without the involvement of a third party, making the transaction free and censor-resistant. Banks or other payment processors might choose to terminate services to anybody for any reason.

What are the disadvantages of cryptocurrency?

Is cryptocurrency a safe investment?

Cryptocurrency can be a dangerous but also very lucrative venture. If you want to get direct exposure to the demand for digital currency, cryptocurrency is an excellent investment. Buying equities from companies exposed to cryptocurrencies is a safer but potentially less rewarding option.

Can a cryptocurrency go negative?

That's what people think. However, in technical terms, it is stated that a coin cannot go negative and also cannot even reach zero, yet it may come really close to doing so; hence, it will lose all of its value.

What is the impact of cryptocurrency?