Advantages and Disadvantages of GPL License

Choosing a suitable Software license is a crucial decision to make. GPL license gives users the freedom to run, use, or modify to distribute a project at their will. There are many Advantages and Disadvantages of GPL License to consider as they can benefit or impact the original developer.

The General Public License, or GPL for short, is a type of license that grants users the rights to use and distribute the software. This type of license allows anyone to copy, modify and redistribute any program as long as they agree to these terms. That sounds about right. But be careful, there are some disadvantages to this type of license.

If you're a software developer, the license under which your code is released is of utmost importance. One of the most popular open-source projects licenses is the GNU General Public License or GPL. In this article, you'll be able to explore what exactly it means to release your work with a GPL license and what are the pros and cons associated with it.

In general, when releasing something under a GPL license, you agree to allow anyone who reads the source code to copy and distribute your work in any way they want so long as their new versions also include all original copyright information and disclaimers from upstream authors.

What are the Advantages of GPL license?

If you're a developer, open-source software might be the perfect fit for your business. The GPL license is an excellent licensing option because it provides developers with access to great code while still allowing them to make changes and modifications of their own.

1. The advantages of GPL License for Open Source Communities

The GPL license is the most popular open-source software development model used today. It's also one of the few licenses that have been tested in court and ruled valid, so you can rest assured knowing there are some legal ramifications for violating it.

Adoption by Open Source communities isn't surprising because anyone who uses your work will have to release their derivative works under a similar or compatible license!

Copyleft is a legal concept that describes the practice of using copyright law to offer users certain freedoms (such as use, distribution or modification) while at the same time forbidding them from imposing further restrictions on these rights.

The GPL License includes this principle because it allows anyone who receives your original work to redistribute copies themselves so long as they also have all upstream disclaimers and license information.

3. Ability for others to freely copy and distribute your work

By releasing your code with a GPL License, you allow anyone to copy and redistribute it for any reason so long as they don't modify or omit the original license information. If someone doesn't want everyone else to see their changes, then simply release them under another open-source software license.

It's not always a bad thing to be covered by other people's patents and copyrights! The GPL License ensures that anyone who uses the software you've created will also have to release any derivative works under an equally free license, meaning there is no risk of someone patenting or copyright-protecting something they learned from using your program.

5. GPL-licensed code can be used in commercial products

This ability is one of the most significant advantages of GPL license. Although the GPL license is sometimes mistakenly seen as a hindrance to business development, there are some scenarios where it can actually help protect your interests.

For example, if someone produces an application that includes parts of GPL software you created, they will have to release their own source code, which means you'll still get credit for your work.

What are the disadvantages of GPL License?

The GPL License is an excellent license for those who want to share their work with others. However, some disadvantages of GPL license force many to look for an alternative license type. Therefore, you should consider certain limitations of the GPL license before deciding if this is the right fit for your project or business needs.

1. GPL-License software goes through many modifications

One of the main Disadvantages of GPL License is that any code which is built upon it also has to be released under one of the GPL licenses. The company building their source on top of it, if they want to release software themselves, must do so using a GPL compatible license. Since it’s mandatory to use the exact copy of the license for the former and the latter codes, you can’t mix your proprietary software and GPL-licensed software.

2. The GPL License is not compatible with the Apache license

Users having developed the code using Apache cannot take advantage of GPL License. For example, a developer who releases their code under an Apache license can't incorporate content or a library released under a GPL license into their work because it would make his entire project fall under the restrictions of the GPL rules and regulations.

3. Strict Rules are disadvantages of GPL license for companies

GPL License forces companies that release open-source software under these terms to make all modifications available for public view even when creating closed source applications, making it difficult or inefficient for larger organizations with many employees to work on the same projects.

4. The GPL License has a strong resistance to change

Many companies find the terms of the license to restricting and would instead create their licenses with less strict regulations, which is possible through creating a new software license from scratch or by using an existing one such as MIT or Apache.

5. The GPL License doesn't support the patenting of software and hardware

You must comply with the GPL licenses, which itself is the biggest limitation of GPL. This makes it impossible for companies to use open source technology in their products without risking infringing on patents already owned by third parties or losing ownership over those they have used themselves. This is a problem for someone who wants to reuse a small portion of the code and patent his work.

Conclusion on Pros and cons of GPL License

This type of licensing agreement may be ideal for many developers who want to contribute their work back to open source communities. The Pros and cons of GPL License, among other factors, should be considered when deciding which type of license would best suit your needs given the type and the purpose of your project. 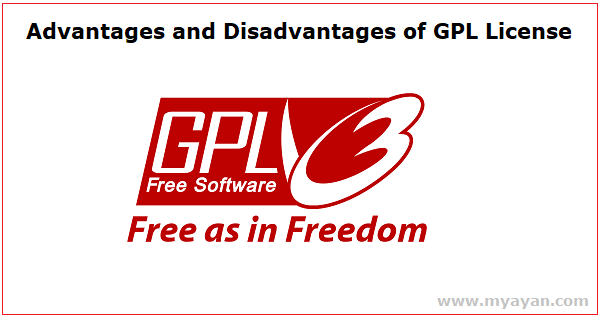 What are the advantages of GPL?

As a GPL v3 software user, you have a lot of choices: You may use GPL software for commercial purposes. You can modify the program and generate derivative works as needed. Finally, you can distribute the program and any derived work without restriction, whether you ask for permission or not.

The GNU General Public License (GPL) terms have nothing to do with the code's security. It's simply a license that governs its usage and distribution. In fact, open-source software might be safer than proprietary software since more people check and fix bugs.

Can GPL license be used commercially?

The GPL v3 license enables users to do the following: Use the code for commercial purposes; Users of the software are allowed to use it internally, just like in GPL v2. Sell copies of the licensed material: The source code may be offered by licensed product vendors.

What is the importance of GNU software license?

The licenses for most software and other useful works are intended to restrict your freedom to share and modify them. The GNU General Public License, on the other hand, is designed to ensure that all versions of a program are free software, so it may be shared and changed freely by everyone.