Pros and Cons of Obama Care

Health insurance is a necessity for most Americans, and the Patient Protection and Affordable Care Act(ACA) – commonly known as Obamacare – was designed to make it more affordable and accessible. Obama care has helped millions of Americans get health insurance, but it has also been controversial. Some people object to the individual mandate, arguing that it is an infringement on personal freedom. Other critics argue that Obamacare does not do enough to control costs and that it will lead to higher premiums and more government debt. The pros and cons of Obama Care further highlight the benefits and problems people had with it.

But first, what exactly is Obamacare, and how did it work?

The key provisions of Obamacare are:

1. The expansion of Medicaid to cover more low-income Americans.

2. The creation of health insurance exchanges where people can compare and buy health plans.

4. The individual mandate, which requires most Americans to have health insurance or pay a penalty.

5. The employer mandate, which requires large employers to offer health coverage to their workers or pay a penalty.

Regardless of its critics, Obamacare was the law of the land, and it had helped around 31 millions of Americans get access to quality, affordable health care. If you need health insurance, or if you are looking for ways to save money on your existing health plan, Obamacare can help.

What are the Pros of Obama Care?

The Affordable Care Act has boosted the number of Americans with health coverage and improved the quality of insurance provided by health insurers. Because of the ACA, millions of previously uninsured people have acquired medical insurance. There are the following promising pros of Obama Care or ACA.

Before the passage of Obamacare, there were few restrictions on what a health insurance firm could and couldn't cover. As a consequence of the law, most health insurance plans now cover more operations, including psychological treatment and maternity care.

The ACA's rule preventing health insurance companies from denying coverage to individuals with preexisting conditions, such as heart disease, diabetes, and others, is one of the most well-known and popular provisions. Anyone seeking insurance with a medical condition before the ACA might be denied coverage or subjected to prohibitive premiums. It can be costly for insurers to accept patients with pre-existing health issues. One in four Americans is believed to have a preexisting medical issue.

2. Expanded Medicare and Medicaid are major pros of the Obama care Act

The ACA also expanded Medicare coverage. The so-called "Medicare donut hole" was closed under the Affordable Care Act (ACA). Before the ACA, individuals on Medicare Part D could lose insurance after spending a specific amount on drugs.

The donut hole has been reduced gradually under the law; by 2020, it will be completely phased out. Consequently, regardless of how much money has previously been spent, Medicare continues to cover the cost of medication. It does not, however, pay for all of the costs of medicine.

Many Americans who live below the poverty line can still obtain health insurance after all states have expanded Medicaid programs.

There are also indicators that there are many pros of Obamacare in terms of improved health. For example, the Act prevents hospitals from charging for infections acquired during a hospital stay. Hospital infections are one of the most common causes of death in the United States.

Perhaps because hospitals now lose money on patients that get sick at their facilities, infection rates have plummeted significantly over recent years. Proponents of the legislation claim that it has enhanced early cancer detection and preventative care, resulting in reduced healthcare costs and better patient outcomes for cancer and other medical problems. Over the last several years, it should be stated that insurance premiums under Obamacare have risen.

What are the Cons of the Obama Care Affordable Care Act?

The requirement that health insurance companies supply more coverage has resulted in higher insurance costs for some individuals, including their premiums. Consequently, people who want extremely limited insurance are forced to pay greater premiums to get better coverage. The ACA also increased the marginal tax rate for certain Americans.

Small businesses are a large focus of critics' concerns. Because the ACA only requires firms with 50 or more workers to provide health insurance, it may pressure organizations to maintain their employee numbers artificially low. This can impact the number of full-time employees that small companies employ.

2. Limited Choices are among the common cons of Obama Care

States refused to expand Medicaid programs, resulting in a reduction in coverage for those individuals. Americans could not maintain their current doctors immediately after the ACA was passed. In addition, some medical providers were not covered by insurance under the Affordable Care Act.

It was difficult for some Americans to buy insurance in the marketplace after the Affordable Care Act was implemented. There were also fewer insurers available because of worries about whether insurance companies would be able to profit from offering plans. Although it is still a worry, most people can now locate a health insurance policy in their region.

Finally, while the ACA has allowed more individuals to obtain health insurance, costs have not decreased. Even those insured still face difficulty paying medical bills, with 40% of all bankruptcy filings in the United States connected to medical debt.

The individual responsibility requirement, also known as the "individual mandate," was another key (and contentious) aspect of the legislation when it was initially passed. The ACA required individuals who did not obtain insurance to pay the penalty on their taxes.

Despite being implemented, the penalty may be less than the cost of purchasing insurance, so some taxpayers elect to pay only the penalty. In addition, the Tax Cuts and Jobs Act eliminated the fine in 2017, so Americans who chose to go without health insurance did not face any penalties. The mandatory penalties came out to be the biggest cons of Obama Care.

While the individual mandate has so far remained in effect under the ACA, there are concerns about whether insurers can continue providing coverage if enough individuals choose not to get treatment. For example, in 2019, 400,000 fewer individuals enrolled in health insurance on a marketplace than in the previous year.

Individual responsibility ran into opposition in the courts. In 2012, the Supreme Court upheld the constitutional requirement that all individuals obtain health insurance. However, legal challenges continue, and the Supreme Court will rule on this issue again in 2020.

Conclusion on the pros and cons of the Obama Care Act

The Affordable Care Act, or Obamacare as it is popularly known, had been polarizing from the get-go. Supporters tout its potential to provide affordable health insurance to more Americans, while detractors decry government interference in one of the most personal aspects of people's lives. These pros and cons of Obama Care are a possible way to find out how Obamacare had fared. 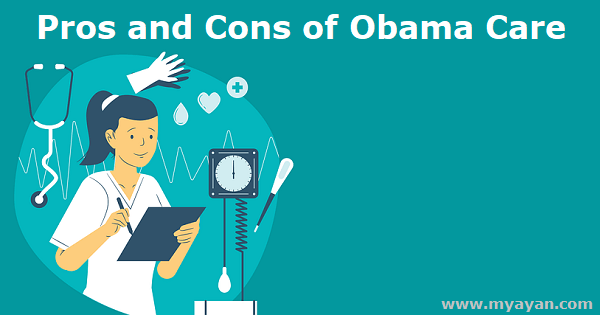 What are the disadvantages of the Affordable Care Act?

The major disadvantage of Obama care is that while costs have decreased for some, they have not been for everyone. In addition, those who do not qualify for subsidies may find marketplace health insurance plans too expensive.

Who benefits from Obamacare the most?

The most significant beneficiaries of the exchanges will be those who don't have health insurance right now and individuals on the individual market.

How did Obamacare fail?

Consumers became more cautious. Premiums and deductibles increased for plans that covered fewer providers and hospitals. In addition, many doctors refuse to accept ACA plans because of their poor payment rates, which led to a two-tiered system.