Advantages and Disadvantages of Exoskeletons

Step on a cockroach; you thought you killed it. The next thing you saw, it got up and ran away from your sight. Voila, you just encountered an exoskeleton creature. Not only physical damage, but a cockroach can also survive in a radioactive environment. Let’s come to the point; an external skeleton is the key role player that saved the cockroach even after you crushed it. Not just cockroach, a Grasshopper, Crab, and lobster are some good exoskeleton examples. Here are some Advantages and Disadvantages of Exoskeletons you need to know.

Once you have known some Exoskeleton examples, it’s time to know what makes the exoskeletons special. Most exoskeleton creatures contain Chitin, Calcium, and Carbonate that provide immense strength and flexibility to the insects. That’s why insects are about six times stronger and two times stronger than human tendons of the vertebrate.

There are certain advantages and disadvantages of exoskeletons, from almost perfect defence mechanism to limiting their growth.

What are the Advantages of Exoskeletons?

Grasshoppers, Shrimps, and lobsters are all Exoskeleton examples. Unlike the endoskeletons such as humans, there following advantages of exoskeletons which make them more unique and safer.

The joints in exoskeletons are more flexible due to the presence of thick covering outside the animals. These joints work with the creature’s underlying muscles. It’s one of the common advantages of exoskeletons that allows for a wide range of movements for insects.

This feature or characteristic is something endoskeletons can’t have. For example, scorpion, shrimp, or grasshopper can move their different body parts in different directions. They have several segments that make it look like each body part receives coverage from a separate piece of their exoskeleton.

2. Protection is one of the greatest advantages of exoskeletons

The external skeleton provides an extra protective covering for an insect’s muscles and soft internal body parts. Endoskeletons can’t have this advantage as they are more vulnerable to external injuries that impact their soft tissues.

The material of this defensive outer covering can be made from bone or a combination of other elements so that it always maximizes the potential of this advantage.

3. Exoskeletons can survive in extreme conditions

Again the extra additional layers of exoskeletons come into play to protect them from extreme weather conditions. A scorpion can sustain the hard scorching sand in the desert. The waxy surface on the innermost layer protects the animal against dehydration even in the direst environment.

The secondary layer in arthropods prevents the predators from penetrating or damaging it. Thus, exoskeletons have many advantages, from surviving in extreme climate to acclimating to dangerous habitat.

4. Exoskeletons are safe against dehydration or wetter conditions

It’s all about the harder covering that makes the exoskeletons unique. The layer on the outside of the exoskeletons acts as a shield for the insect, which prevents moisture and heat from affecting the inner organs. Sometimes extremely wet conditions make it harder for animals to move.

An all-around safety against heat and moisture are major advantages of exoskeletons. The outer layer works in both ways for the creatures, a raincoat as well as an insulator.

Also, the exoskeletons can lift a weight that’s about 50 times heavier than their own body. This is because exoskeletons serve as points of attachment for muscles, providing animals with more leverage and mechanical advantage than an endoskeleton can offer.

What are the Disadvantages of Exoskeletons?

Even though the exoskeleton layer around some insects offer so many features to them. They do come with some drawbacks. The layer is heavy enough for some insects that is a problem next to molting. Here are some other disadvantages of exoskeletons.

1. Limited growth is among common Disadvantages of Exoskeletons

The exoskeletons are smaller in size for some reason. The thickness of the outer layer restricts the growth of the insects, even for insects of bigger sizes. The exoskeleton is a heavier component that would be hard to manage for insects if they grow larger.

2. Injuries may not heal

Though exoskeletons are hard to get an injury once their inner or outer body gets damage, either it’s hard to repair or won’t repair at all. Insects nearing their molting time are generally more vulnerable to injuries, and even a minor crack can turn severe due to a slower recovery process.

3. Sensory organs may not function due to the thick outer layer

In some exoskeletons, the sensory organs may not function properly due to the presence of a thick outer layer. They have to rely more on vision and hearing except for feeling something through their skin.

4. It can sometimes interfere with breathing without accommodations

If an insect is nearing its molting time, its body puts pressure on its external skeleton, which may interfere with its breathing. This disadvantage of exoskeletons also affects the insects when there are significant moisture levels in their habitat.

Unless the natural occurring rectify the situation, there could be health concerns with this problem that are problematic enough to endanger the insect’s life.

Tarantulas are the best example of exoskeletons that face several challenges during the moulting process. Eating during the phases of moulting also tends to bend insects' fangs and claws, and mostly they turn out of shape.

Some complications usually happen before the exoskeleton completes eh hardening process. On the other hand, most bone-based exoskeletons face it while giving birth. This could be one of the rare disadvantages of exoskeletons, not for every insect, but some specific ones.

Conclusion on Advantages and Disadvantages of Exoskeletons

Understanding the Advantages and Disadvantages of Exoskeletons, the benefits outweigh the limitations for most creatures. However, there can be rare incidents in which animals face the drawback of the durable outer layer.

Exoskeletons provide animals with critical protection so that they aren’t immediately vulnerable to predators and adverse weather conditions. So, even though there may be a few challenges to the creature during their molting stage, it can be managed easily in general. 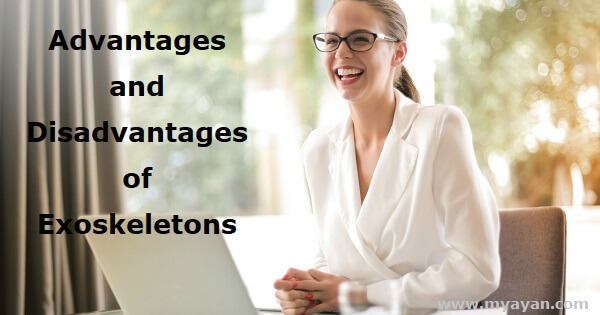 Why is an exoskeleton advantages?

The fact that a hard covering protects an animal's body on the outside, such as an exoskeleton, helps to support and safeguard the creature while protecting predators. It also protects the soft, inner organs and muscles from harm.

What is the disadvantage of an exoskeleton?

They can't elongate or expand. Gas exchange and sense pick-up need special modifications. It is a significant constraint on growth. It must be shed at regular intervals to grow properly.

Are exoskeletons a defensive adaptation?

Exoskeletons are useful in defense against pests and predators and provide muscle support and attachment. Exoskeletons of arthropods include chitin; the addition of calcium carbonate increases their hardness and strength while adding weight.

Are exoskeletons stronger than Endoskeletons?

A typical endoskeleton is generally sturdier and resistant to physical stress than an exoskeleton.

What kind of animals have exoskeletons?

Exoskeletons are used by insects, spiders, and shellfish, among other invertebrates. The exoskeleton helps them to be strong and steady, as well as protecting their internal organs. Animals with exoskeletons need to shed their old skeleton to produce a new one.