Advantages and Disadvantages of Plasma Insfusion 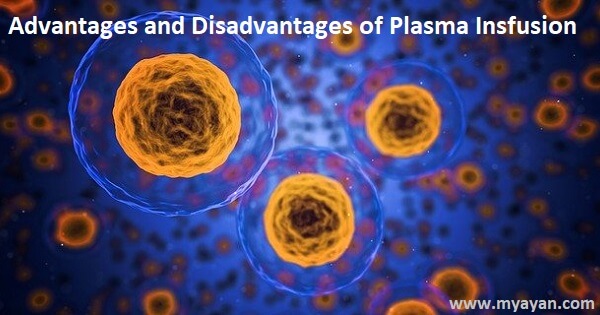 Transfusion of Plasma or the Fresh Frozen Plasma for severely ill patients is effective. Medical studies stand in support of both blood plasma uses and its side effects on donor and the recipient. This information tries to differentiate the Advantages and Disadvantages of Plasma Infusion from recipient's perspective.

Plasma is the blood component obtained after extraction and separation from a whole blood unit. It is the pale yellow liquid part of blood consisting of 55% of blood and 92% of water. These cells are frozen after being removed from the whole blood cells. This fluid is then used to replace replenish the missing levels of protein in a patient under critical medical conditions.

What are the Advantages of Plasma Insfusion?

Plasma Infusion side effects and benefits vary on several scales and differ from donor-to-recipient. In some severe medical cases like Multiple Cases and Parkinson’s disease, Plasma Transfusion is tremendously effective. Here are some noteworthy and supportive facts about why people prefer transfusion of plasma.

Multiple Sclerosis (MS) is a lifelong degenerative condition that affects Brain and Spine. It continues growing a wide range of symptoms in a patient including vision-related problems, low immunity, and mobility issues. MS is common among women and is diagnosed in people in their 20s and 30s. This autoimmune disease starts affecting the immune system by deteriorating the healthy parts of a patient’s body.

Plasmapheresis, (blood cleansing), a process of Plasma Infusion for MS Patients, is performed by transfusing the healthy fluid into a patient’s stream. This therapy aims to replacing the weak blood proteins with healthy ones to boost the immunity mechanism.

During Plasmapheresis, whole blood is taken out of a patient’s body and plasma is separated from WBCs and RBCs. Then the processed healthy blood plasma transfusion is done in a patient’s body going trhough pain and relapses. Even though there is no solid evidence if plasma infusion for MS patients is effective, but fresh plasma exchange helps patients suffering from severe relapses.

Over 1.6 Million Americans (10 million worldwide) are affected by Parkinson’s Disease (PD), which is a neurodegenerative disorder aggressing with age. The effects of PD widespread throughout the brain resulting in motor, cognitive, mood, and other non-motor symptoms.

3. FFP is Effective and Easy Treatment for Neuropathy

Peripheral Neuropathy is a diabetic complication that leads to progressive weakness and impaired sensory functions in the arms and legs of a patient. A clinical trial conducted in April 2017, on two groups of PN patients concluded that the group that underwent Plasma Transfusion with medication showed improvement in muscular functions.

During the phase of trials, one group was kept on regular medications along with PRP, while the other group underwent medication only.

Studies have also proven that injecting PRP can reduce wrinkles and enhance facial skin tone and firmness. A group study conducted on customers undergoing facelift resulted that Platelet Rich Plasma Transfusion is the solution to Skin aging and dark circles underneath the eyes.

The study also formed the base for encouraging the use of PRP injection to boost Collagen and Elastin for better skin elasticity and firmness.

In a case series of five critically ill patients from China who underwent Plasma Transfusion, it was found that Convalescent Plasma Transfusion is the possible solution to Coronavirus (Severe Acute Respiratory Syndrome, SARS-CoV-2). The study was conducted at the infectious disease department, Shenzhen Third People's Hospital in Shenzhen, China, from January 20, 2020, to March 25, 2020 (Final day of conclusion).

All five patients (Aged 30-65) who underwent Convalescent Plasma Transfusion, showed drastic improvements. 3 out of 5 patients were discharged after the treatment while, 2 stayed stable (off-ventilator).

What are the Disadvantages of Plasma Infusion?

With significant changes and benefits, Plasma Transfusion procedures and therapies have continually increased over the past two decades. Every fluid exchange is a process that encompasses certain risks. The following are possible Plasma Transfusion Side Effects one may experience.

Plasma Transfusion is associated with allergic reactions along with Transfusion Related Acute Lung Disease which is a rare but deadly condition. This condition may arise in an FFP recipient in the form of sudden respiratory distress. The symptoms may start lining up within six hours of administration.

TRALI is the leading cause of transfusion-related mortality in the United States with Canada reporting the highest mortality rate, those affected by TRALI essentially need ventilatory support in order to recover to normalcy.

Transfusion Associated Circulatory Overload (TACO) is one of the Plasma Transfusion Adverse Effects that may show up within 6 hours from administration. This reaction may occur in a patient due to sudden rapid infusion of blood or FFP in large volumes. A spike in blood pressure level and shortness of breath is the preliminary stage of detecting its symptoms.

Administering fluid also involves the risks of transmitting HIV (Human Immuno-Deficiency Syndrome Virus), Hepatitis B and C through transfusion. This transfusion-related transmission of infection may occur due to human negligence (avoidance of necessary transfusion guidelines).

4. Other Plasma Transfusion Side Effects

A patient’s blood pressure level is lower during a plasma infusion, which may result in weakness, drowsiness, or nausea. These symptoms can be prevented by taking fluids. In some rare cases, PT can also cause blood clotting and allergic reactions. Post-Plasmapheresis symptoms also include loss of appetite, vomiting, and Diarrhoea. Chronic Alcohol Abuse and smoking also contribute to Plasma Transfusion Adverse Effects.

Cases reporting Plasma Transfusion contradictions have decreased in the past years responding to advancing technology and guidelines. Even though plasma transfusion is safer today than in the past, clinicians must be aware of the potential disadvantages of Plasma transfusion. Only better evidence-based guidelines can safeguard against inappropriate fluid exchange methods.

What is Blood Plasma Function in your Body?

Why is Plasma Transfusion Needed?

You need a Plasma Transfusion if you have a critical ailment, Blood Proteins Deficiency, blood loss, Cardiac Surgery, or weak immune system.

What are the side effects of receiving plasma?

There is a small chance of plasma transfusion side effects for the recipient. These risks include a spike in temperature, itching or a rash, and in extreme cases, TRALI and TACO.

Is giving plasma bad for you?

Donating plasma is as safe as donating blood, but side effects of plasma transfusion may come up. Some common but minor side effects are dehydration and fatigue. Fatal side effects occur due to a lack of medical attention.