Advantages and Disadvantages of Privatization

Privatization holds the key in generating more output in urban and economic development. Contributing to the national income and landing more opportunities to people, privatization can be the answer to problems and bottlenecks that arise in the traditional working environment. Simultaneously, privatizing the public sectors can negatively impact people’s living standards. These Advantages and Disadvantages of Privatization outlines both faces of the coin.

The private sector has grown in the past few years, with the public sectors undertaking financial management. Most of the developing nations have adapted to privatization to develop the national economy at a faster pace.

What are the Advantages of Privatization?

Privatizing means getting into the race to develop faster. According to recent statistics, the developed nations have more engagement of the private sector and hence, have better GDP than the developing ones. Employment to the deserving, poverty riddance, and proper utilization of resources are some major advantages of privatization. Some other reasons why developing nations incline towards privatizing are given below.

1. Eradication of Poverty through Employment

"Poverty" is a global challenge that all human beings fight against. The total number of people categorized under “poverty” has been significantly reduced in the past 30 years. The third and fourth industrialization revolution and rapid economic growth globally have reshaped the stats. Employment is probably one of the greatest benefits of Privatization.

Private organizations need a workforce to complete the taken projects timely and efficiently. Where local people can have more work opportunities, industries look for local talent to execute tasks as soon as possible. With governments allocating resources to the private sector for bigger projects, more skilled people get employment opportunities. More Privatization is a great opportunity to improve the lives of people everywhere.

The private sector is driven by profit; the more you work, the better is the pay. Therefore managers in private organizations have an incentive to cut costs and motivate their employees to be more efficient if they want better incentives. Higher salaries and regular incentives are some of the major advantages of private-sector jobs.

Employees can work extra hours to get more pay at the end of the month. According to a study conducted by the National Treasury Employees Union, employees working in the federal sector receive remuneration up to 23.1% less than what they could earn in the private sector for the same post.

The private sector jobs provide more growth opportunities to employees. The time for consideration for salary approvals appraisals from the HRD is also less than that taken by the government sectors. An organization holds the authority to promote, incentivize, and award an employee based on their performance.

This could be one of the best reasons for the benefits of privatizing. Furthermore, the private sectors are more flexible in granting the employees to switch to better yielding roles within the organization.

4. Projects based on Latest Technology

Computer and Information technology is one of the five major contributors to the US GDP. IT jobs are the highest paid ones in the Private sector, offering employees the latest technologies; the IT domain is where an individual can stay up to date with advanced learning and developing concepts. You get a chance to polish your skills every time there’s something new on the market.

Public sectors fail to optimize resources, the private sector invests more in handling and managing large-scale use of resources. This is why many federal governments opt for privatization rather than handling one on their own.

The private sector tends to succeed in the optimum use of resources by maintaining efficiency and better resource planning and management system. Private sector companies keep track of every penny spent from utilities to labour and managers.

The private sector generates 90% of jobs, funds 60% of all investments, and provides over 80% of government revenues in developing nations. Privatization has provided an ever-increasing share of essential services in developing countries, including banking, telecom, healthcare, and education.

Surprisingly, it’s the private corporations that pay the highest taxes in the US. Apple, Walmart, IBM, Microsoft, and JPMorgan are leading contributors who pay for more than 80% of government revenue.

What are the Disadvantages of Privatization?

Privatization can prove to be beneficial for many organizations, including public ones. There can be negative impacts of it on a public which directly or indirectly, may affect their living standard. From insurance and education to pension or other allowances, these Disadvantages of Privatization must be considered seriously.

1. No Job or Security

This insecurity is inherent to the private sector, which may turn into a disaster when a recession hits the economy. Laborers may be relieved from their jobs anytime without prior notice and any compensation. However, such may not be the case if they are employed in a public sector organization.

2. Lack of Funds from Government

The government usually wants to allocate resources to private sector enterprises with the least requirements and financial expenses. Every project takes approval in terms of funding, deadline, business requirements, etc. The budgetary matters are discussed before the project is handed over to a private company.

However, if the government stops funding in the middle of a project, the company would be accountable for incurring the loss of money, equipment, and workforce. In that case, the management has to pay for labor, taxes, and utilities. In other words, the private sector has to depend too much on the government for meeting its imports requirement, output sale, finances, etc.

For example, suppose a private company undertakes a project to build highways or railroads. They decide how to recover road taxes, how much to recover, and how long to continue the recovery process. The same is with other services such as education, health, telecom, or public transport. Excessive roaming fees charged by telecommunication operators best explains this situation.

Employees of a private organization have lesser chances to entertain job-associated perks outside the basic salary. Compared to government job holders, they scale far behind in terms of availing medical benefits, pensions, transport, House Rent, and Dearness allowances, etc.

Even the fortune-making private companies appreciate employees' hard work only after evaluating their performance to consider for appraisals. Besides the competition, employees can feel demotivated and unvalued despite giving in 100% effort.

Private sector units are influenced in those areas, which yield more revenue and profits to them. Therefore every company wants to invest ideas in a few places where they can cheap labor, use maximum resources with little input.

Misuse of resources and exploitation of resources are the main disadvantages of privatization. The private sector focuses on better quality even if they have to hire people at the lowest wages. In the worst-case scenario, some private sector companies may use malpractices to save resources if they can’t find labor and services within the estimated budget.

The debate on the Advantages and Disadvantages of Privatization is a never-ending loop. Transparency and fairness are still the major contributors to the success of every country's development. Even after privatization, the government needs serious consideration of how the change in business processes transforms ordinary people's daily lives.

After Uber allowing its drivers with Pensions, Holidays, and other retirement benefits, it may be time for other nations to consider what's suitable for their public. Even though the private sector is critical to economic growth and poverty reduction, it cannot act alone. Not without the government's support. 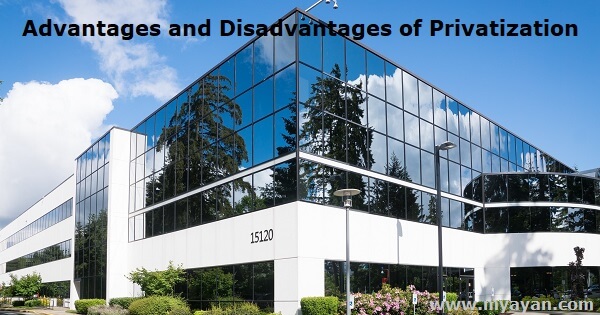 What are advantages of Privatisation?

The elimination of government influence and the promotion of economic development is aided by privatization. State-controlled firms enjoy a monopoly and are unaffected by competition in the market. Private bodies without a political goal concentrate more on increasing revenue and efficiency for more significant users.

What are the advantages of privatization of government services?

What are the major problems of privatization?

The constant rise in living costs worsened services and utilities, particularly in rural and remote areas, due to the 'economic costing' of services such as telecommunication, water supply, and electricity. Employees working for privatized businesses had lower employment opportunities, overtime pay, and actual salaries.

What are the causes of privatization?

Government-owned ports may be sold for various reasons, such as to generate extra government funds. Efficiency and cost savings might be translated into profit-sharing possibilities, which is excellent news for investors.