Advantages and Disadvantages of Carbon Tax 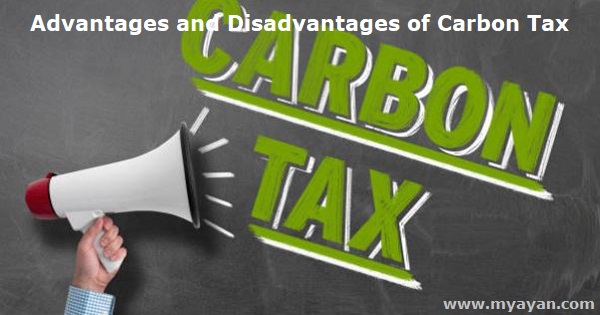 The carbon tax is a tax on the use of fuels that emit CO2 or on the purchase of goods and services that cause CO2 emissions. In simple words, it is a fee imposed on businesses and consumers for every ton of carbon they emit into the atmosphere. It has also become one of the most debated political topics dealing with taxes, climate change, and economics. The advantages and disadvantages of carbon tax discuss the pros and cons of its implementation.

The carbon Tax History dates back to 1993 when the Clinton Administration proposed the general tax on all forms of energy. Since then, the Carbon Tax has been a hot topic as the world deals with severe climate changes. It is also one of the most controversial political topics as it deals with taxes, climate change, and economics. The purpose of a carbon tax is to distribute the cost of burning carbon equitably.

These costs are borne by those who suffer from the effects, such as homeowners and farmers, and eventually society. Seventy Seven countries have implemented carbon taxes as a shared global responsibility to tackle global climate change.

What are the Advantages of Carbon Tax?

Citizens may feel an extra load on taxes while paying the carbon tax. But, it's for the good that will return to the world in many different ways. The following advantages of carbon tax are what the public should be aware of at the moment.

Deteriorating air quality has been much of a concern for many developed nations. Much of the air pollution is caused due to automobile sector and industrial sectors. Recently, governments have introduced a carbon tax in order to combat air pollution.

Carbon tax successfully reduces air pollution because it incentivizes people and organizations to change even relatively small parts of their lifestyle that may cause them more harm than good.

2. Economic Benefits at the Local Level

Carbon Tax can provide economic benefits at the local level. Implementing a tax on any carbon or carbon-based fuels would help reduce our addiction to fossil fuels and its harmful pollutants.

This is because citizens are paying for the pollution they create. The money generated from this taxation can be allocated to improvements in infrastructure, technology, and recreational activities.

Carbon taxes are a measure that some governments have implemented in order to regulate the use of fossil fuels and encourage people to use renewable energy sources. A study done by MIT and Columbia University found that if the United States introduced a carbon tax, it could raise $2.4 trillion over the next ten years.

4. Lots of benefits that save consumers money

Advocates strongly support the concept of a carbon tax because it creates three potential benefits: households are refunded with some form of credit; more efficient renewable energy solutions that are cheaper become available; and, due to a lowered level of CO2 in the atmosphere.

Despite the small initial expenditures, a carbon tax will provide many beneficial opportunities for our economy and society.

5. Lifestyle Changes are the main advantages of Carbon Tax Policy

A carbon tax makes people more aware of the effects of living an unsustainable lifestyle. Seeing prices rise on gas and other items causes people to conserve, switch how they get around or make healthy lifestyle changes that benefit the environment.

Also, by 2035, Many European countries would have been running on gasoline and coal alternatives such as Hydrogen Energy, Electric Cars, and other sustainable methods.

What are the Disadvantages of Carbon Tax?

Implementation of a Carbon tax could cause people to spend less, which would hurt businesses and eventually hurt those who cannot afford higher energy costs if carbon tax continues up or doesn't decrease with inflation rates like other prices do over time.

The carbon tax is regressive because it puts an unfair burden on lower-income families. It's also disproportionately burdensome for people living paycheck-to-paycheck, usually the poorest. In addition, those who spend more of their income on energy use, such as low-income households or rural dwellers, will also get the hit.

One of the drastic disadvantages of the Carbon Tax is that it creates an artificial economic market that isn’t always sustainable on a global scale. This means there will be countries with a high demand for carbon-based fuel and those with low carbon demand, which could cause an unfair energy trade.

5. More Time and Efforts are challenging disadvantages of Carbon Tax

Legislation has a complex process and can take years to implement, so it can be a struggle to meet commitments. In addition, a carbon tax could be onerous for business owners because they will have an adjustment period until they find ways to become compliant while saving money; this may result in higher pollution levels and emissions during the transition stage.

Conclusion on Pros and Cons of Carbon Tax

The pros and cons of carbon tax look good in theory and even may work for a while. However, it can be challenging to implement policies that balance the environment's needs with consumers' budgets unless strict rules are part of this idea to target producers and consumers equally. In addition, there is much pushback from critics who say this policy already penalizes middle-class families with high energy costs.