The Pros and Cons of Raising Minimum Wage 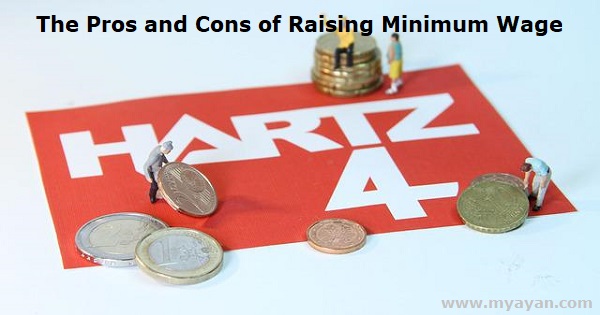 Some say exploring raising the minimum wage will only lead to inflationary pressures and higher living costs, while others assert that it is a long-overdue measure to help low-income workers make ends meet. There is evidence to support both sides of the debate. This pushes many to discuss the pros and cons of raising the minimum wage, especially in developed economies.

Workers and unions frequently lobby governments and business chambers of commerce to increase the minimum wage. It is often a touchy subject, especially in the United States, where multinationals such as McDonald's — which generates billions of dollars in profits yearly — have advised employees on how to make ends meet on the federal hourly wage. From a marketing standpoint, the optics aren't great, and there was a real backlash.

The problem with job advertisements is that they often only mention the hourly rate, leaving it up to potential employees to negotiate their own pay. In Australia, which has one of the highest minimum wages in the world, businesses like Woolworths are being investigated for underpaying staff. A Masterchef empire has fallen as a result of this wide-ranging inquiry. So why do firms want to keep costs down, and why do jobs always go first in hard economic situations?

What are the Pros of raising minimum wage?

Employees who don't have to worry about where their next meal comes from or how they will pay their rent or power bill are more likely to be productive. So, here are some of the Pros of raising minimum wage.

There is a direct correlation between an employee's productivity and pay. If you want your employees to be productive, you have to pay them enough to live on. When the minimum wage rises, businesses are more inclined to invest in automation and labor productivity.

For example, a shift to self-service tills or increased self-service at restaurants. This investment will help firms afford the pay raises that result from it. It increases overall production by making things less labor-intensive. Productivity growth is critical to long-term economic growth.

It costs a lot of money to train new employees. Every time an employee quits, the company has to spend money on advertising, interviewing, and training someone new. If you pay your employees more, they are more likely to stick around, and you won't have to keep training new people.

3. Improved Customer Service is one of the pros of raising minimum wage

If your employees are stressed out about how they will pay their bills, they will not be able to give your customers the level of service they deserve. When you raise the minimum wage, your employees can focus on their work and provide excellent customer service.

It costs a lot of money to hire and train new employees. When you have a high turnover, it can take a toll on your bottom line. Paying your employees more will make them less likely to leave for a better-paying job.

When workers have more money in their pockets, they are more likely to spend it. This increased spending will help to stimulate the economy and create jobs. An increase in economic activities is one of the clear pros of raising minimum wage in this scenario.

There is a direct correlation between poverty and poor health. So when you raise the minimum wage, you will likely see a decrease in the number of people living in poverty. This will lead to improved health and mental health for those workers.

7. Increases demand for goods and services

Lower minimum wages would benefit lower-income households more than higher ones since they spend a larger proportion of their income on expenses. This may lead to an increase in consumer demand. As a result, raising the minimum wage may negatively impact the economy.

There is a strong correlation between poverty and crime. Therefore, when you raise the minimum wage, you will likely decrease crime rates. This is because people struggling to make ends meet are more likely to turn to crime to make money. Reduction in Crime rates is ultimately one of the most notable pros of raising the minimum wage from society’s viewpoint.

9. It's easier to attract high-quality employees

10. It helps businesses save money in the long run

While raising the minimum wage may cost businesses more money upfront, it will save them money in the long run. This is because they will have to spend less on training and advertising and less employee turnover.

What are the cons of Raising the Minimum Wage?

Many businesses are concerned about how increasing the minimum wage might affect them.

One of the main concerns about raising the minimum wage is that it might lead to job losses. If businesses have to pay their employees more, they may respond by cutting jobs or hours. This could lead to increased unemployment, especially among low-skilled workers.

2. Increased Prices for Goods and Services

Another concern is that businesses will raise prices to offset the increased cost of labor. This would lead to inflation and make it harder for people on fixed incomes to meet ends.

Some opponents of raising the minimum wage argue that it amounts to income redistribution from business owners to workers. They believe that this could lead to decreased investment and slower economic growth.

Another argument against raising the minimum wage is that it would make businesses less competitive. For example, if businesses have to pay their employees more, they may be less able to compete with businesses in countries that don't have the same labor costs.

Some people believe that one of the concerning cons of raising the minimum wage is that it would create a disincentive to work. They argue that if people earn more money for doing the same job, they may be less likely to try to improve their skills or move up in the company.

Some businesses argue that the administrative burden of complying with a higher minimum wage would be too great. They also argue that the complexity of the new rules would make it difficult to comply with the law.

There is a concern that raising the minimum wage could lead to job losses in rural areas. This is because businesses in rural areas often have lower profit margins and may be less able to absorb the increased labor costs.

9. Inflation is among the dreaded cons of raising the minimum wage

One of the main concerns about raising the minimum wage is that it could lead to inflation. If businesses raise prices to offset the increased labor cost, it could lead to a spiral of rising prices and wages.

Another concern is that raising the minimum wage would create uncertainty for businesses. They may not be sure how to comply with the new law and may be worried about the potential negative effects on their business.

There are pros and cons of raising the minimum wage, and it ultimately comes down to each business and employee deciding what’s best for them. Hopefully, this article has given you a better understanding of both sides of the argument. It will help you make an informed decision about whether or not to raise your company’s minimum wage.

What are some cons of raising the minimum wage?

Increasing the minimum wage might decrease the value of employing an inexperienced entrant because business owners may find it more cost-effective to hire a higher-paid experienced employee or invest in technology.

What effect does raising the minimum wage have?

Raising the minimum wage would raise labor costs. As a result, some businesses would hire fewer workers than they otherwise would under a lower minimum wage. However, employment might increase in some cases for certain individuals or under particular circumstances.

Is raising the minimum wage a good idea?

Raising the federal minimum wage to $15 an hour would improve the lives of all minimum-wage workers. These people would be better able to cover their monthly costs, such as rent and car payments.

Why is raising the minimum wage bad for small businesses?

For businesses and individuals, the higher minimum wage comes at a cost. Higher prices for customers, lower profits for small firms, lost income for those who lose their employment, those who have their hours reduced, and people seeking basic work experience but cannot find jobs pay for it.