Pros and Cons of Lightning Rods

If you live in Florida, Georgia, or Texas, it’s reasonable to install lightning rods for homes. With Georgia topping the charts accounting for over 3800 insurance claims, residents have a hard time coping with millions of dollars lost every year. Lightning rods are a possible solution to this problem. But before going through the Pros and Cons of Lightning Rods, it’s imperative to understand them.

Lightning rods are devices made of metal (usually copper) mounted on the rooftop of a building to protect it from lightning strikes. Lightning is an electrical discharge that forms in the atmosphere when there is an imbalance in thunderstorm electric currents.

These imbalances cause positive and negative charges to build up in the storm clouds, with either side reaching a certain threshold enough to send sparks into the lower atmosphere. Today, most people rely on lightning rods; simply long metal poles mounted on buildings or other structures during high risk for thunderstorms.

The origin of installing lightning rods was credited to Benjamin Franklin, who proposed them in 1752 during his lectures on electricity. His ideas were not accepted, but many roofs were equipped with lightning rods after his death.Moreover, the losses due to thunderstorms cost in terms of money and lives.

Some Pros of Lightning Rods

According to the Insurance Information Institute, the number of insurance claims rose to 17,551, totalling a loss of $2.1 billion in 2020 alone. Lightning rods can save you such loss if you reside in any of the prone states. The pros of lightning rods are many that need your attention, especially when your house isn't insured.

The pros of lightning rods are that they can be a viable and low-cost option for those households and buildings insured by companies. It provides a very low-cost way of protecting people and property from the dangers of lightning.

Lightning rods are appropriate for houses and buildings insured by companies that approve of their use. The installation process is easy to do without any professional help. Yet, it's still good to consult with the roofers just in case you're not sure if you're installing everything correctly.

The lightning rods work basically as one-time investments because they require no further maintenance once they've been installed. Of course, it should be checked now and then if there are damages or problems with the cables, but other than that there isn't much to worry about.

The pros of using roofs equipped with lightning rod systems far outweigh the cons, which are basically negligible unless you live/work in an area that's prone to continuous electrical storms.

4. Protection from Lightning Strikes is one of the obvious pros of lightning rods

The pros of using lightning rods are that it provides a very low-cost way of protecting people and property from the dangers of lightning. While they won't completely protect you from direct strikes, it will greatly reduce your chance of being struck by lightning as well as limit potential damage.

5. Protection from Other Electrical Discharges

One of the potential benefits of using lightning rods is that it provides a very low-cost way of protecting people and property from the dangers of lightning. While they won't completely protect you from direct strikes, they will greatly reduce your chance of being struck by lightning as well as limit potential damage.

Some cons of lightning rods to consider

One important disadvantage of lightning rods is that they may also attract lightning. Lightning rods, because they are made of metal and because metal conducts electricity, may channel the energy from a nearby lightning strike to a building, setting it on fire. The cost of installing and maintaining such rods can be prohibitive for some people as well.

1. Lightning rods are only effective if your house is visible

Since lightning rods can only protect visible structures, people who live in tall buildings or underground parking garages would not be able to benefit from them.

2. No Protection for Non-Visible Structures

Lightning rods are effective with small-scale problems but are useless with large-scale disasters. Although it is useful in reducing the damage of a simple thunderstorm, lightning rods do little to help during major electrical storms that wipe out entire areas.

3. Effectiveness Limited by Size of Storm

Some say that lightning rods attract lighting towards structures because they have an increased conductivity than their surroundings. While this effect is negligible on structures designed for it, there have been some cases where the increase in conductivity caused damage to nearby buildings.

People who live in areas prone to thunderstorms and lightning strikes need to constantly monitor the weather and make sure there is no lighting in the area. If a storm comes, you would have to take shelter immediately, without enough time to get everyone safe. Lightning rods are useful for individual structures but not entire communities.

5. You Need To Monitor the weather

Some people feel uncomfortable having long metal poles on their buildings because it makes them feel like they are inviting the lightning into their house rather than keeping it away. Their fears aren't completely unfounded either since there have been cases where lightning did strike through the pole onto the building below. This can be mitigated by installing a second lightning rod at the highest point of your building, but it is still best to be wary.

Lightning rods provide a low-cost way of protecting people and property from the dangers of lightning. They won't completely protect you from direct strikes, but they will greatly reduce your chance of being struck by lighting as well as limiting potential damage. Lightning rods can only help visible structures, so if you live in an area prone to thunderstorms and lightning strikes, make sure there is no lighting in the area before taking shelter or putting up your roof with a lightning rod system on it. 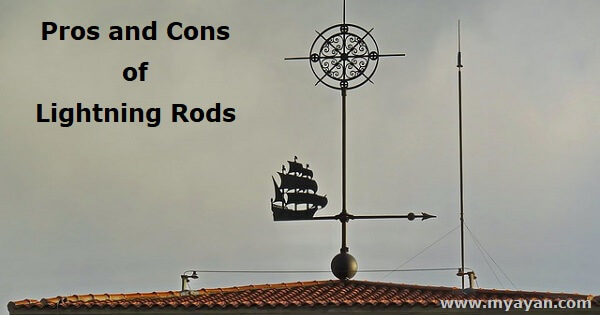 What is the disadvantage of lightning rod?

It can pierce your body and kill you if you fall on one while on the roof. Lightning rods with a pointed tip should be avoided at all costs. Being near it when lightning strikes are dangerous.

Why are lightning rods not used anymore?

There is no need for lightning rods (or the associated assembly of a connection to the earth and a ground rod) to be excluded from structures. However, most high buildings and other constructions do have a lightning protection system installed.

Are lightning rods a good idea?

Lightning rods are effective at preventing a direct lightning strike, but they cannot protect a building from circuit failures or other damage caused by lightning entering it via wires and pipes. Gas pipe protection may also be required.

Are all houses built with lightning rods?

There are several of these on homes across the country, but they aren't as common as they used to be. Effective lightning protection systems include many lightning rods spread throughout the top of the structure. They won't stick out since they aren't so big anymore.