Pros and Cons of the Digital Rupee 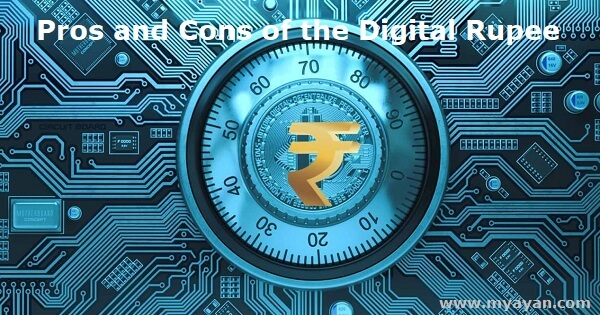 The world of cryptocurrencies thriving or the necessity to go all digital pushed India to launch its Digital Rupee on November 1, 2022. India's first Digital Rupee pilot project commenced recently. The Reserve Bank of India (RBI) launched the pilot for a central-bank-backed digital rupee for the wholesale segment just at the start of November 2022. There have been speculations by experts about the pros and cons of the Digital Rupee. So, let's find out more about what Digital Rupee is exactly and its impact on retailers and wholesalers.

What is Digital Rupee?

Central Bank Digital Currency (CBDC) or Digital Rupee is a digital currency note issued by central banks. The rupee, or digital currency, is an electronic version of currency which can be used in transactions without contact. In the presentation of the Union Budget 2022, finance minister Nirmala Sitharaman announced that the Reserve Bank of India (RBI) would be the body that will oversee this pilot program.

The Reserve Bank of India stated in a release that the nine banks are as follows:

What’s the Difference Between the Digital Rupee and Cryptocurrency?

Cryptocurrencies are digital assets that function as a medium of exchange that utilizes blockchain technology. They've come under scrutiny because of their decentralized nature. This means they do not have an intermediary like banking institutions or banks. On the contrary, CBDCs are created by Reserve Bank and are legal to use in digital format as a tender.

According to Manoj Dalmia, Founder, and Director of Proassetz Exchange, the digital rupee will differ from Bitcoin, Ethereum, and other cryptocurrencies because it will have government backing. Secondly, this government support will result in the digital rupee being worth the same as the physical rupee.

What are the Pros of the Digital Rupee?

According to the PM of India, the Central bank's digital currency, the Digital Rupee, will make online transactions more secure and safe. It will boost the digital economy in the years ahead. The Prime Minister also said that the digital rupee would facilitate the creation of an international electronic payment system. In addition, there will be several other pros of the Digital Rupee in terms of Logistics, printing, and paperless currency. Here are some other advantages of the Digital Rupee you should know of:

With approximately 3,000 privately-owned digital currencies, many governments seriously consider issuing their own national cryptocurrency. According to the International Monetary Fund, one primary motivation for this is that it would help control personal digital money growth.

Industry experts estimate that there are between 15 and 20 million crypto-investors in India, holding a total of 400 billion rupees (US$5.37 billion) in cryptos. However, most cryptocurrency exchanges need to provide basic details about the product or the risks involved to their customers before they invest.

If these companies lack security, they might go bankrupt. Although, the digital rupee is safeguarded by government support in case of an emergency.

2. Less volatility is one of the main pros of the Digital Rupee

Since the RBI manages this currency, there is no risk of it being mishandled or used feloniously, as opposed to cryptocurrency. In conclusion, The Digital Rupee will be less variable than other digital currencies. In addition, it will offer more reliability and transparency to investors.

With the digital rupee, no third-party intermediaries are involved in transactions, unlike other cryptocurrencies. As a result, customers can expect lower transaction fees for each purchase made with the new currency. This could save millions of rupees for businesses that rely on online or mobile payments.

Overall, there are many reasons why the Digital Rupee offers significant advantages over existing payment systems in India and worldwide. As it gains traction and acceptance within the financial community, we can expect to see its benefits realized by both consumers and retailers alike.

Negative interest rates help encourage people to spend money and thus can act as a stimulant during tough economic times. However, this is only possible if people can withdraw their cash from banks. CBDCs could solve this issue by making it easy for negative interest rates to be set for CBDCs kept in digital wallets.

The government's digital currencies are vital for users to stop using cash and help prevent tax fraud. The Digital Rupee will also make it easy for users to get some money back, remittances, loans, insurance, stocks, and financial products with smart contracts that can be programmed.

Unlike current methods, Digital Rupee will provide the RBI with direct tools to regulate monetary policy, which in turn will influence production and supply flow. By having a digital currency, policy changes will be reflected instantly instead of waiting for commercial banks to decide when it's appropriate to implement those modifications.

What are the Cons of the Digital Rupee?

Although pilot projects for CBDC global launched as early as 2014, progress has been slow due to the numerous consequences, both foreseen and unforeseen, that this innovation can bring. Consider these cons of the Digital Rupee before committing to it.

1. Challenges for the banking system

The implications of digital currency on the banking system are far-reaching and must be fully understood. For example, if CBDCs (central bank digital currencies) prove to be attractive savings vehicles for retail customers, this could decrease deposits held at banks. This would then ripple through to other areas, such as the role of banks in credit creation, the RBI's monetary policy stance, etc.

2. Financial instability is one of the potential cons of the Digital Rupee

If the RBI provides digital interest rates for the rupee, they will compete with banks. If the regulator competes with regulated entities, it could jeopardize depositors, which could destabilize the banking system.

India is currently facing numerous cybersecurity security threats. With the rise of digital currencies, and less secure methods to store these funds, cyberattacks are likely to increase -and even threaten users with digital theft. A recent case, the Mt Gox bankruptcy case, worried many investors who had their assets stored on the site.

The digital currency must gather basic information about an individual so the person can verify they hold that particular digital currency. This sensitive information could be identity details, fingerprints, etc. Additionally, CBDCs will create a digital footprint even when the phone is turned off--for example, by paying for food, accommodation, and transportation.

Many KYC (know your customer) and data privacy operational issues will surface during implementing of CBDC. Since the project is in its infancy, these issues still need to be fully addressed.

Another potential con of the Digital Rupee will be its control of the government, which can interfere with and impact monetary policies to an extent never seen before. If CBDCs are viewed as a viable alternative form of currency, this could weaken central banks' influence over inflation and even force governments to loosen their macroeconomic policies to stay competitive; this could include tax breaks or other benefits for those who use the digital rupee.

Too much regulation is also like a double-edged sword or leads to unemployment, depending on one's perspective. The RBI wants high-level transparency on transactions, thus giving high regulatory oversight, but at what cost?

Conclusion on the Pros and Cons of Digital Rupee

Although there are many potential cons associated with the Digital Rupee, there are also a number of significant benefits that could help boost economic growth and stability in India. While more research needs to be done to fully understand how it will impact the financial system in India, it is clear that this innovation can significantly improve monetary policy, reduce transaction costs, increase financial inclusion, and increase transparency and security around digital transactions. Ultimately, the pros of the Digital Rupee outweigh the cons, making it a compelling option for India's economy in the future.

How will the Digital Rupee impact retailers?

When compared with physical cash, Digital Rupee will provide retailers with the following benefits:

What's the most significant benefit of the Digital Rupee?

One of the most significant benefits of the Digital Rupee is that it can provide increased security and reduce theft risk. Unlike physical cash, which can be easily stolen or lost, Digital Rupee transactions are stored securely in a centralized digital ledger and protected with robust cryptographic encryption.

What is the biggest downside of the Digital Rupee?

It could lead to greater surveillance and tracking of user activities. To facilitate transactions and protect against fraud, a centralized database or blockchain may be used to store transaction data, providing authorities with a wealth of information about individuals' spending habits and financial activities.

Are there any other potential risks associated with Digital Rupee?

User privacy and cybersecurity issues will be the two main concerns when using Digital Rupee. To maintain the security and stability of digital currency, continuous monitoring and maintenance will be required, which could leave digital transactions vulnerable to data breaches or other digital attacks.