Advantages and Disadvantages of MIT License

Choosing a license for SAAS is essential whether you are a client or a developer. The MIT License is a permissive license that doesn't require attribution. Where tech giants such as Facebook and Microsoft use this license, many developers avoid using it. You should be familiar with the Advantages and Disadvantages of MIT License before you opt for it for your project.

MIT License is an open-source software license first released in 1989 by the Massachusetts Institute of Technology (MIT). It is widely used among developers and organizations. The MIT License is a free software license originating at the Massachusetts Institute of Technology (MIT) and used by the X Window System and most UNIX-like software. This type of license permits unrestricted use, distribution, and reproduction in any medium, provided that attribution is preserved.

What are the Advantages of MIT License?

There are many advantages of MIT License, including the ability to re-license derivative works and compatibility with various open-source licenses. You can also integrate the MIT license with GPL, which gives you freedom as a proprietary developer.

1. It does not require attribution

The term "MIT License" refers to the terms of a copyright license that enables free distribution, unrestricted use, and modification for any purpose of software or other work released under it. The permissive nature of the MIT license is beneficial for open-source developers as well as Businesses.

2. Short and easy to understand

It is widely used among developers and organizations. The MIT License has a straightforward structure, making it easier for people to read and understand. The license terms and conditions are simple, which make clear to the user that they can modify, distribute, or merge its copy with the new copies.

3. Compatibility is one of the key advantages of MIT License

The MIT License is a free software license is used by the X Window System and most UNIX-like software. This type of license permits unrestricted use, distribution, and reproduction in any medium, provided that attribution is preserved.

In addition, the MIT license is compatible with other copyleft licenses such as GPL, which means a project based on MIT license can easily be integrated with GPL licensed software.

4. It allows the use of the software by companies with closed-source, proprietary products

The MIT License is compatible with other open-source licenses as well as pre-free and commercial closed source software. Advantages of this feature include allowing developers to combine or link different applications together without legal restrictions from the license owner. This lets them make better software for their customers, whatever form it takes - whether public domain/open source or proprietary.

5. It is not a Copyleft license

MIT License doesn’t have share-alike terms, so it does not require derivative works to be released under the same or similar license as original software/code. Advantages of MIT Software Licensing include making it popular for use in libraries and other code you want to easily link with free open source software (FOSS) and proprietary closed source software(CSS).

What are the Disadvantages of MIT License?

Apart from the benefits, there are some Disadvantages of MIT License, which include not being compatible with proprietary software patents, which may be an issue if you intend for your software to remain closed-source.

MIT license provides no warranties (express or implied) of any kind, and your software may imminently cease to function without warning. While some open source projects offer a “warranty” clause in their licenses, this is typically only for the benefit of commercial distributors who wish to provide an additional level of support and service on top of that offered by the free community tools themselves. It does not mean that users must access all versions/releases back into time forevermore.

2. Lack of copyright is one of the major disadvantages of MIT License

Copyright in all works created by the Initial Developer is transferred to the Organization and after that may only be modified or distributed with the copyright holder's approval. While this can benefit projects that want a high degree of control over their “brand” image, it also leaves them exposed if they lose lead developers, have internal disagreements about project direction, etc.

The MIT license provides no express patent protections. Some patents may be automatically licensed when using MIT-licensed software, but you won’t get an explicit statement that this is the case (as with copyrights/no copyright management). This can be a particular concern for commercial projects without any other open-source code in their stack, where all of their IP could rest solely on one or more patents they hold.

4. No attribution is itself one of the major problem drawbacks of MIT License

The MIT license requires no notice or attribution when using the software. While this might be advantageous to some projects, others may wish to avoid having their code potentially used in other works without an appropriate citation and possibly even licensing fee.

Its permissive nature becomes the major hiccup for many source code developers as they don’t the profit the third-party developers make by modifying the code and monetizing it.

The MIT License (like all permissive licenses) is a type of license commonly referred to as a ‘copyright-enabling license’ because it allows the user of the software complete freedom in how they choose to use or distribute it. This includes distributing proprietary derivatives without making source code available and not giving back at least some derivative works under the same terms.

Conclusion on Pros and Cons of MIT License

MIT is a permissive license which means it allows people to do anything they want with the content so long as they give credit. The MIT License also does not have any restrictions on using the content or what type of project one might create from it.

This makes MIT an attractive option for many organizations and businesses looking to share their work in open source projects. Still, there are disadvantages that you should be aware of before choosing this license. For instance, some argue that using the MIT License may allow your code to grow faster because more developers will likely collaborate on improving it. 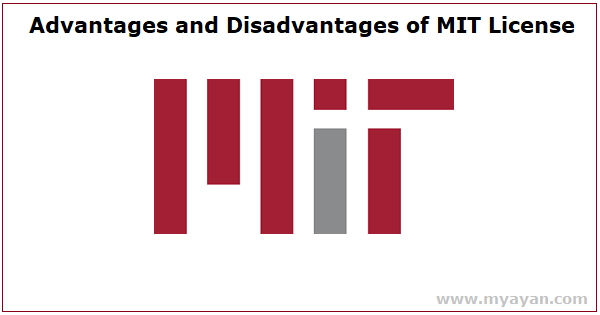 Is the MIT license good?

The MIT license is a fantastic option because it allows you to share your code under a copyleft license without forcing others to reveal their proprietary code, and it's business and open-source friendly.

What problems does MIT license solve?

The MIT license grants permissions and indemnifies developers for future use. In addition, it gives any person who obtains a copy of the software and associated files the right to use, modify, merge, distribute, publish, sublicense, and sell copies of the software.

Can you profit from MIT license?

There are no limits to commercial usage in the license. The only stipulation is that any copies of the software must include the MIT copyright notice. After that, it's a free license, and it allows you to utilize the program for whatever purpose you want, including commercial and for-profit usage.

What is the restriction of MIT License?

There's no limit to commercial usage in the license. The only stipulation is that any copies of the software must include the MIT copyright notice. Other than that, it's a free license with few limitations and allows you to utilize the software for whatever purpose you choose, including commercial or profit-making purposes.