Pros and Cons of Walmart 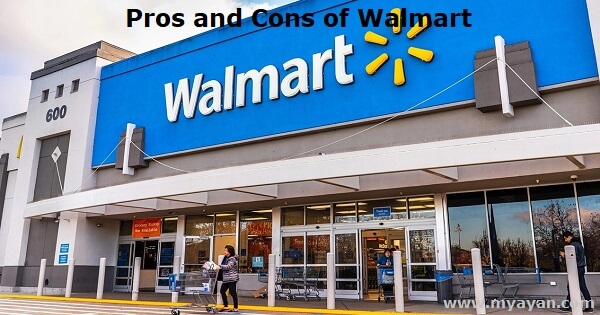 Walmart has become an internationally recognized household name as a fierce contender online and offline marketplace. The company was started in 1962 as a discount store by the Walton family. And now, the company has millions of employees with thousands of stores running 24/7 worldwide. If you have joined Walmart as an employee or customer, you need to know certain benefits and drawbacks. The concept of Walmart has become one of the most well-known representations of contemporary capitalism. The pros and cons of Walmart mentioned are comparable to those of capitalism in general. While most benefits are focused on the consumer, the primary drawbacks are those associated with Walmart's employees.

What are the Pros of Walmart?

All the pros of Walmart are in direct correspondence with the ideals of a capitalistic consumer; the corporation being beneficial to the national economy, low and affordable prices, massive employment, etc.

Walmart is recognized for selling goods at significantly lower costs than other businesses, which simply implies that purchasing a product here rather than a locally owned business saves you additional money. Other stores can't match Walmart's low prices.

Customers frequently praise Walmart for making it possible to obtain the goods they need most, with many people extolling its virtues as a bargain hunter. The company's trademark is low prices, which holds for all of its items, including electronics, food, and everything else.

With over 2.2 million people working and 11,501 stores located across the globe, Walmart is often cited as the world's Retail Giant. The firm has done an excellent job of controlling inflation and maintaining employee productivity at a high level. The chain of shops may also save millions of consumers money, resulting in lower wages and fewer competitors.

Head over to the market, and you can find anything from their retail stores with optimum quality. You can purchase meals for the week, electronics, automobile repairs, and clothing in one trip. It's a one-stop shop that isn't available anywhere else. Furthermore, it does not charge a membership fee to enjoy savings.

This includes everyone from cashiers to greeters who will always make an effort to be polite and helpful and be sure to take care of every customer in the best way possible. This might not always happen at other places, so it's nice to know that this company takes pride in taking good care of its customers.

You can find organic food items such as organic rice, vegetables, meats, and more without much trouble when you shop for groceries here. There are also many everyday products such as baby wipes and trash bags that happen to be less harmful to the environment than their counterparts made with harsh chemicals or materials.

What are the Cons of Walmart?

There are several cons of Walmart, and most of them affect the employees. Negative effects on the environment, low wages for the employees, anti-employee policies are several downsides from a capitalist multinational corporation. Find out more in the following segments.

When a Walmart comes into a community, oftentimes, local businesses shut down because they can't compete with the low prices offered by the retail giant. This obviously harms the local economy.

2. Plastic Packaging and Containers are major Cons of Walmart

This includes excessive packaging, selling products that are harmful to the environment, and even creating more greenhouse gases than necessary. Plastic takes hundreds of years to decompose, and that is even more hazardous when destroyed through fire or chemicals.

According to critics, Walmart has a terrible track record of mistreating its workers and prioritizing the interests of management. According to reports, the company gives minimal regard to severely abused employees and has only one aim: to fit into the corporate philosophy that it is concerned with itself.

According to court records, the company has been named in numerous class-action lawsuits involving hundreds of thousands of former and current employees who had their work hours and paid docked without consent.

4. One of Many Walmart Cons is the Negative Impact on Small Businesses

As mentioned before, when a Walmart comes into town, often the local businesses close because they can't compete with the prices offered by the retail giant. This is bad news for the community because it hurts the local economy and eliminates jobs, and decreases the availability of goods and services.

Gender-based discrimination is one of the known cons of Walmart for people employed there. In 2003, Wal-Mart was exposed to the public and charged for hiring illegal citizens to do some cleaning after hours. The case, led by the Immigration and Customs Enforcement, lasted more than 4 years and produced a huge number of arrests of undocumented workers. However, the company managed to evade criminal sanctions by settling to pay millions of dollars and then disputed the claims of racial and gender discrimination.

Conclusion on the Pros and Cons of Walmart

As you can see, Walmart is a company that has both pros and cons. Whether or not the pros outweigh the cons is up to each individual to decide. What's important is that you're aware of both sides of the story before making any judgments about this large retailer.

What are some cons of Walmart?

What are the pros of Walmart?

The Walmart Effect has both advantages and drawbacks. It can help control inflation and maintain employee productivity at a high level. The chain of stores may also save consumers hundreds of millions of dollars while simultaneously lowering wages and competition in a particular industry.

What is the problem with Walmart?

With more than 2.2 million workers across the world, Walmart has faced a barrage of lawsuits and concerns regarding its workforce. These difficulties include low pay, poor working conditions, lacking health care services, and concerns about the firm's anti-union solid initiatives.

Is Walmart a positive or negative impact on US society?

Walmart has a detrimental influence on American society as a whole. Walmart offers some of the best prices on goods and services in the retail sector. While low costs are beneficial, Walmart's low pricing takes a toll on its workers. Because of such cheap prices, Walmart is compelled to pay its employees such minimal salaries.