Top Pros and Cons of Zoo 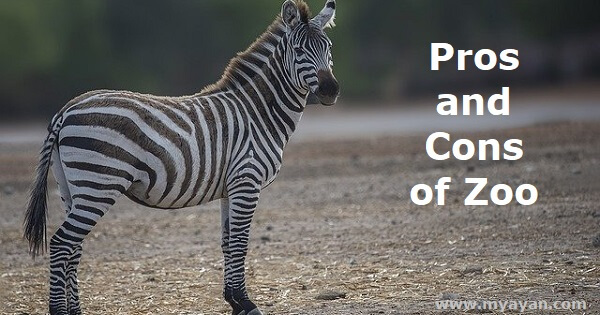 Whether it’s great idea to provide a natural environment using artificial setting, or just confining animals within boundaries, the debate is always on. The pros and cons of zoo must be considered thoroughly. According to a report, there are over 2800 zoos and aquariums around the world out of which 355 are in the US. Zoos have a long history behind them, and many maintain breeding programs to assist in eliminating genetic bottlenecks, especially for endangered species. In addition, zoos have been an important part of human history since early humans started recording events. If you are wondering about the goods and bads of zoos, have a look at explanation given below.

What are the Pros of Zoo?

Let's start by looking at the major pros of zoo, which began almost 2,000 years ago and are still pertinent today.

Visitors to the Zoo learn a lot of vital information while witnessing living and breathing creatures for entertainment. Modern zoos frequently offer tours and information stations and actively seek to educate and teach future generations about the importance of conservation and biodiversity. Of course, reading about animals or the environment is an excellent way for individuals and children to understand animal advocacy.

2. Protection of Endangered Species is one of the main pros of Zoo

Animals are frequently poached for a variety of reasons. Because they are behind multiple layers of protection, a zoo offers these animals a safer home. Poaching has been successful in penetrating zoos in the past; however, this is not frequent and is generally unsuccessful when it does succeed.

Besides being a safe haven for extinct animals species, zoos are also major attractions for public from local or far beyond areas. This means that zoos are frequently a draw for families, school excursions, and others wanting to spend their time and money in the community. This benefits not just the Zoo but also local businesses, creating employment and entrepreneurial possibilities.

Zoos do more than just help animals; they also collaborate with other zoos worldwide to establish breeding programs for some of the planet's rarest creatures. This is especially crucial for endangered species now living in threatened areas, but it's critical for animals on the verge of going extinct. This is among the considerable pros of zoo when the ecosystem is well–maintained by preventing some species from extinction.

For example, if the numbers of a certain species in the wild plummet to such an extent that they're unable to meet, their chances of finding one another and reproducing are practically nil. As a result, zoos have an important function in these circumstances, and some outstanding examples of creatures rescued from oblivion include the Arabian Oryx and the Puerto Rican Parrot.

Zoos generally have on-site medical and care services for all animals. If they have any medical issues, veterinarians can assist them immediately. This is particularly significant for some of the world's rarest creatures because their own existence and that of their offspring are important. Animals can be examined for parasites, viral illnesses, and cancer regularly in addition to providing breeding programs.

What are the Cons of Zoo?

Even though there are several benefits of zoo, it is by no means a flawless environment. Therefore, even though the value of conservation can't be overstated, it's critical to be conscious of the constraints and cons of zoo.

Many wild animals have evolved to live in specific settings, habitats, and climates, but they are unsuited to being kept in cages. Even though Zoos frequently try their best to replicate a particular species' natural environment, this effect may be limited. An Orca living in the wild can live up to 100 years. However, it rarely lives beyond 30 years in captivity. This indicates that the Zoo environment is not always successful; numerous causes exist.

2. Lack of Space is among considerable cons of Zoo

Zoos inherently lack space. No matter how big the enclosure is, it will always be smaller than an animal's natural habitat. This can cause boredom and mental illness in some animals, frequently leading to self-harm, such as pacing back and forth or bar-biting.

Inbreeding is commonly used in Zoos to avoid importing new animals from the wild; this means the father can breed with his daughter and brother with his sister. While this may help conserve a species, it also has some serious disadvantages for the animals involved.

When animals are brought together in close quarters, there is always a risk of disease outbreaks. This can be disastrous for the animals and the Zoo staff, as well as any visitors who may come into contact with the sick animals. The risks can sometimes turn into severe cons of Zoo.

Another common criticism of Zoos is that they do not do enough to improve animal welfare. Animals in Zoos are often kept in small enclosures, with little or no opportunity to express natural behaviors. This can lead to boredom, mental illness, and physical health problems.

The ethical dilemmas surrounding zoos are typically discussed from two diametrically opposed viewpoints. Animals are frequently regarded as property under legal standards. As a result, a zoo may appear to be an ideal environment to live a high-quality life while preserving wild animals in their natural habitat. For others, the cage confinement of any animal is thought to be an unethical decision. It's been said that "wild animals should be free."

Are zoos helpful or harmful?

Captivity might be detrimental to both physical and mental health. While zoos have been beneficial in preserving endangered animals, it does not work for certain species. When released into the wild, most large carnivores, such as lions and tigers, bred in captivity perish.

How are zoos harmful to animals?

Animals are forced to live in unnatural, stressful, and uninteresting conditions at zoos. They are isolated from their natural surroundings and social networks and confined to small, confining habitats that deprive them of mental and physical activity.

What problems do zoos bring?

Many people claim that animals live longer in captivity, but this may not be true. While some individuals may live longer due to a lack of predators and competition for food, stress, obesity, and other factors contribute to the early death of many zoo animals.

Are animals safer in zoos?

Zoos regulate the effects of humans and various elements on animal populations and habitats. In certain circumstances, such as nutritional scarcity or habitat destruction, endangered species everywhere face a major hazard: their numbers will decline.