Advantages and Disadvantages of Shanty Towns

Millions of people live in shantytowns and most of them are displaced. Shanty towns are known by different names, such as slums, shack towns, or informal settlements. These residential areas are common in cities like Cape Town, Manila, Port Au Prince, Mumbai, and Mexico City. There are many reasons dwellers want to live in shantytowns, but contradictions for many circle these areas. The Advantages and Disadvantages of Shanty Towns describe their importance and why they are not a good choice for living.

Shanty Towns or Squatter area is surrounded by small and closely packed buildings and homes, and the site lacks proper infrastructure and sanitation. It can be a small area with few people or a larger room with millions of people.

Ciudad Neza or Neza-Chalco-Itza is the largest shanty town in a small city near to Mexico. The population of this town is estimated to be in the range of 1.2 million to 4 million. Tondo in manila and Manshiyat Nasser in Cairo are few examples of large shanty towns or slums worldwide.

They are known by different names, such as Favela in Brazil and Villa Miseria in Argentina. Initially, the railway sidings and disputed places are used by few people. If the space is large enough, it grows into bigger colonies with no water, sewage or electricity. People use whatever material is available for construction, from wood to mud.

However, with time the situation of these slums is expected to get better with improved housing and other facilities. We can derive the usefulness and problems associated with these unorganized areas by discussing shantytowns' various pros and cons.

What are the Advantages of Shanty Towns?

While these may seem to be a problem for nearby cities, they offer homes to millions of poor people who don’t have access to better homes and colonies. In addition, many migrants who don’t have access to homes often build temporary houses to live and survive in new places. People migrating to cities often experience several advantages of shantytowns.

The major reason for people living in slums is the lack of proper employment and earning opportunities, due to which they migrate to other places. To survive, they need homes, and shantytowns are the best options available to them. This prevents homelessness for migrants who can't afford a living.

Once the people start living in a town consisting of several other migrants and poor people, they have to learn to survive with cooperation. In order to access basic facilities like water and sanitation, they have to struggle and compete with other people, which can be made more accessible through cooperating with each other.

3. Easy Jobs are the common advantage of shantytowns

The primary reason migrants choose to live in these crowded places without any amenities is to find work to pay them money. Slum-dwellers are often hired for blue-collar jobs in the manufacturing and construction sectors. Most people are poor and have to work in nearby cities and towns. This solves their problems of work as they can live nearby to their work.

Slum-dwellers have lived in unorganized areas, which are usually unapproved by the government authorities. This means they don’t have to pay for any rentals or taxes. All they have to pay for is the food they eat and the clothes they wear.

Although this is not a benefit as we say that struggles and hard work make a person more skied and more challenging, these slums can make you experience the harsh realities of life. The survival of the fittest is how this world works, and slum dwellers are very well aware of these realities.

Dharavi is not only India's largest slum, but it's also known as the biggest place for waste recycling. This place houses a million-dollar recycling industry which unquestionably means more jobs and income.

In order to improve and uplift the living standard of slum-dwellers, there are developments taking place in different shantytowns. The modern-day shantytowns are equipped with solar energy to supply electricity to the residents.

What are the Disadvantages of Shanty Towns?

Although these towns provide shelter to millions of poor people who don’t have better amenities, they create other problems. A majority of these colonies are set up in disputed lands and pose several problems for local municipalities. In addition, some significant disadvantages of shantytowns often act as obstacles in the process of urbanization.

The towns are closely packed and built with no infrastructure on illegal grounds. The government doesn’t recognize these towns as part of regular cities and does no work improving roads and sanitation facilities. So often, these places are found dirty, and water facilities are also rare.

These towns can be small as well as spread over a large area with a large population. Several shanty towns in both developed and developing countries have thousands of people living in small places compared to their people. Even major cities are so packed that they contain millions of people in small spaces.

The people living in shanty towns don’t have access to proper medical facilities. They are primarily dependent on government hospitals as the cleanliness is way under the appropriate level the risks of various diseases in more in these towns. Moreover, these diseases spread quickly due to closely packed homes.

The availability of jobs, water and other resources is limited and creates competition among the residents as they struggle between themselves. This can increase the struggle between them to find employment and also a lot of other facilities like schools are also not available for them which can secure them a better future.

The slums overgrow, and the residents use mud, sand, wood, and whatever is available to provide them with a temporary home. Also, the government can remove the reason to prevent illegal societies hold them to make proper houses and other improvements in their neighbourhood. There are no adequate construction plans whatsoever. People start living wherever they find liveable space, which is one of the dire disadvantages of the shantytowns.

Conclusion on Pros and Cons of Shanty Towns

The slums result from financial conditions, unemployment, migration etc., which cause people to live in inappropriate situations. These create problems for nearby developed cities and towns as they are highly unhygienic and also a reason for many diseases. However, these are the people behind these big cities as they work as labour most of the time they are not a proper colony themselves. Some modifications and improvements can be done by the efforts of the government to improve their living conditions. 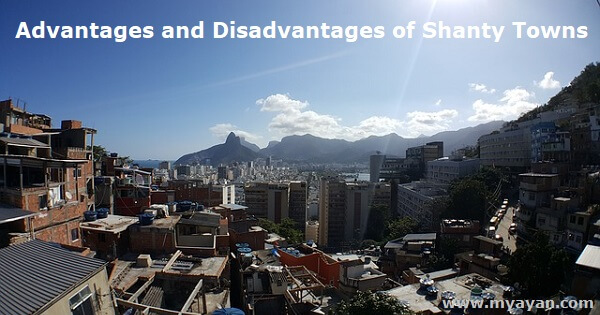 What are the advantages of living in a shanty town?

There is less traffic, which means fewer gasoline expenses and lower air pollution. Because of the constraints imposed by streets too narrow for cars to pass, shanties are safe for walking and cycling. People dwell on less food, emphasizing re-use and sharing of resources.

What are the problems with shanty towns?

Overpopulation- The region's resources aren't enough to feed and care for the rising number of people. Epidemics occur when sanitation and health care are insufficient. Lack of room - new and poorest entrants may be forced to live on the worst possible land.

How can shanty towns be improved?

People get funding for their houses by taking out a low-interest loan. These give people the resources and training they need to improve their homes. Low-interest loans may be utilized to assist individuals in financing these improvements. In addition, the land may be assigned legal ownership to those who qualify.

Why do shanty towns grow?