Advantages and Disadvantages of Gene Therapy

Gene Therapy could be the cure to fatal diseases such as Spinal Muscular Atrophy (SMA). Life quality in people with SMA deteriorates with age if not treated in time. Around 40% of the kids in the UK are born with SMA. The cure is not only rare also painful. Thanks to gene therapy, to make the treatment painless for patients. Where there are many benefits of gene therapy, it has its limitations too. The Advantages and Disadvantages of Gene Therapy take a look at the pros and cons of this marvellous invention of genetic engineering.

What is Gene therapy?

It’s the process of identifying the faltered gene and replicating it to combine with a virus injected inside the patient's body. The virus replaces the bad DNA with the corrected one. This therapy is often practised on kids born with degenerative diseases such MS (Multiple Sclerosis), SCID (Severe Combined Immuno Deficiency), and SMA (Spinal Muscular Atrophy).

What are the Advantages of Gene Therapy?

A kid with severe SMA may not be able to survive more than a year. Gene therapy brings new hope to many parents. Along with longevity, there are many advantages of gene therapy one must note.

1. Gene therapy is a lifesaver

Birth Defects are the leading reason behind mortality among infants. The genetic flaws can only be cured by combining healthy genes and injecting them into a baby’s body. With Gene Therapy, many genetic disorders can be controlled and cured to lower the fatality rate.

2. Gene Therapy is a solution to many Genetic Disorders

Not only kids, Gene Therapy, is an effective way to treat patients of any age with hereditary disorders such as Epilepsy, Diabetes, or Alzheimer’s. More than 300 million people in the US are affected by distinct diseases caused by faulty genetics. With gene therapy, healthy cells could replace unhealthy cells and provide fair treatment for the patients.

The focus of gene therapy research emphasizes creating new medicines and treatment procedures that are effective and less painful. Once treated properly, patients can live longer, being less prone to a genetic disorder.

The same approach applies to other living organisms such as plants and animals. It’s possible to identify genetic defects and correct them to enhance an organism’s features.

4. Gene therapy could be useful in the treatment of multiple diseases.

Even if the researches based on gene therapy are limited as of now, are many are underway. This means the world may be able to cure even incurable diseases. Gene therapy is predicted to be helpful in the treatment of a variety of conditions.

As per recent studies, Gene therapy could be a cure for a rare form of blindness called Leber Congenital Amaurosis. The same approach can be used to respond to Parkinson’s disease positively.

5. Permanent Cure is one of the major advantages of Gene Therapy

Once the healthy genes replace the faulty genes, patients will no longer have to worry as the chances of gene altercation would be almost zero. This means they will be cured permanently. Permanent results are the most prominent advantages of gene therapy as there are no chances a condition would reverse.

There is also the possibility that some of the changes could be heritable to the next generation of patients after treatment. That means the newly replaced gene would reduce the offspring’s risk of suffering from similar conditions.

What are the Disadvantages of Gene Therapy?

Scientists firmly believe that this gene therapy is a brilliant invention of technology and medical sciences. The technology paves the way for further experimental which could transform human lives exceptionally. However, some concerns do contribute to the disadvantages of Gene Therapy. Some of the gene therapy limitations are highlighted below.

1. Gene Therapy may cause immune reactions

Given that Gene Therapy is still in the experimental phase, not everyone is sure if therapy will render positive results on patients. The body’s immune system may react differently to the viruses injected with the copied gene after infusion.

The invasiveness nature of the virus would have to be neutralized to avoid any mishap in the patients’ system. In addition, white blood cells fight the newly introduced genetic materials, leading to health issues like inflammation, headaches, or dizziness in a patient. Worst case scenario, the immune system may resist the genetic modification entirely, causing the body to fail.

Viruses can affect more than one type of cell in the human body during the process of gene therapy. Viruses carrying the altered genes can likely infect the rest of the healthy cells.

Given that gene therapy targets specific types of cells, the treatment doesn’t guarantee that the experiment will bring out a positive outcome. When the altered viruses react with the healthy cells, the cells may be damaged and produce undesired results.

3. Errors could be fatal

Gene therapy is performed under highly specialized facilities with professionals having in-depth knowledge of DNA structure, sequencing, and distinguishing faulty cells from healthy ones.

If the gene combined with the virus is transferred into the wrong spot in the patient’s body, the risk of malignancy would be higher. The therapy may turn fatal as it can also aggravate the existing condition in patients.

This approach is still practised as an experiment where doctors make it clear to the patient’s attendants the treatment may not work. As a result, most of the concluded trials are based on animals before humans.

Humans, however, may respond differently to this method as they may also resistant to gene therapy or show no response at all. In some cases, it is entirely possible that the treatment could fail or worsen the patient’s health.

From basic tests to research and treatment procedures, it’s the cost that puts most families under immense pressure. The fee for Gene therapy can go as high as $1 million in the US. Even though technological advancements may reduce the costs in the future, but for now, gene therapy is a treatment that only the privileged class can afford.

Due to patent laws, it’s impossible to afford the generic medicines necessary for the treatment. This means patients are on their own to deal with their financial issues.

Conclusion on the Pros and Cons of Gene Therapy

The conclusion based on the above pros cons of gene therapy is a 50/50. As an experimental approach, the method has proven helpful to many paediatric patients. As far as the limitations of gene therapy, researchers may need more time and resources to come up with tangible evidence. 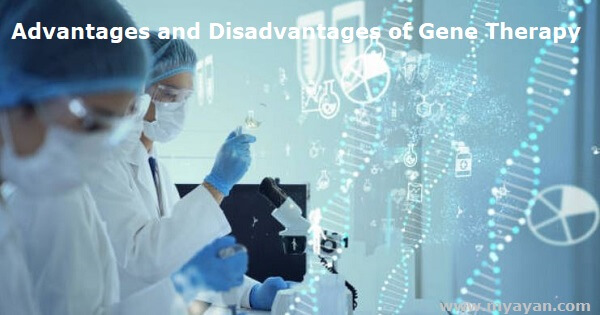 What are the advantages of gene therapy?

Gene therapy is a treatment for diseases or bodily functions hampered by a genetic fault or the lack of a functional gene. Gene therapy can cure many illnesses, including cancer, cystic fibrosis, heart disease, diabetes, hemophilia, and AIDS.

What are cons of gene therapy?

DNA-based gene therapy has several dangers. The method in which the genes are delivered and the many vectors used might pose several threats. DNA mutations Nuking or otherwise damaging nearby tissue, especially around nerves, can result in nerve damage or death.

Delivery to the wrong tissue would be inefficient, resulting in adverse health consequences for the patient. Incorporating a therapeutic gene into a patient's germline or reproductive cells that generate sperm and eggs is just one example of incorrect targeting.

Why is gene therapy not a permanent cure?

Unfortunately, gene therapy isn't as simple as injecting genes into circulation. DNA is made up of millions of bases, and they can't enter cells on their own, so to deliver new pieces of DNA to cells in the body, you must encode them in a virus.

What are the social implications of gene therapy?

It would provide new treatment options and imply new responsibilities for making such decisions in an equitable manner and for the benefit of both individuals and society.