Advantages and Disadvantages of Technology 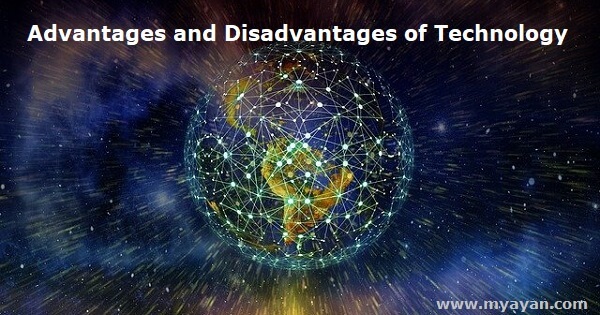 It’s important to know the advantages and disadvantages of technology in the 21st century and its impact on humans and the surroundings. Modern Technology is something that can’t be ignored in this era.

Students, workers, and even nature depend on it. Technology affects humans and nature in many different ways. From living standards to societal changes, here are the pros and cons of technology that have shaped this world.

What are the Advantages of Technology?

Life wasn’t the same about three decades ago. Technology is the reason why inventions such as smartphones, laptops, e-learning, the internet, and much more exist.

Technological breakthroughs have eased the way for humans in construction, healthcare, and the commercial sector. These advantages of Technology are related to everyone who is living in this century.

Modernization: The advancements brought by modern inventions in every sector has eased the way of doing business. People can cover a long distance in just a few hours. All thanks to the technological advancements made in railroads, waterways, and the aviation industry.

Let’s not forget that travelling into space is now possible because of modern science and technological development.

It’s easier to access knowledge about anything or any place as you sit on your couch. WWW or the internet has made it possible to access information from anywhere in just a few clicks.

That’s probably one of the greatest advantages of technology in students life. They can gain information about projects, compile research or thesis easily with the help of internet.

3. Globalization is one of the common advantages of Technology

Globalisation is one of the ever-known advantages of technology as it lets companies find numerous ways to conduct better business. Through technology, finding the right employees, ramping up the production, and generating more revenue are easier for organizations that tend to look for skills abroad and hire deserving candidates.

Business deals can be done remotely using the hi-speed internet connection. Even a company can reap most of the benefits by hiring an outsourcing company located in a different country by investing less in the projects.

The new replaces the old, and this goes with the technology as well. Letters and postcards are now replaced by mobiles where communication occurs instantly. Thanks to evolving technology, you can make a simple video call on a 5G network and connect to your loved ones face-to-face.

Even business meetings and webinars are conducted smoothly hence, saving the company’s time and resources. In addition, communication methods have shifted from paper to the internet; this also helps protect the environment as no trees are deforested for paper manufacturing.

Years ago, seeking better education was a difficult dream for many. However, with advanced technology and equipped classrooms, learning is quite easier than before. Moreover, students from the remotest areas can connect to online classroom nowadays. Moreover, the modern concept of e-learning lets you learn from your home.

There are many digital platforms from where you can get to learn better with advanced and high-tech methods. The easy learning process through modern-day concepts is one of the greatest advantages of Technology in Students Life.

What are the Disadvantages of Technology?

Even though humankind is thriving just because of the technological revolution, technology holds its share of a bad reputation. The following are some disadvantages of technology faced by both living beings and nature.

1. Pollution is one of the common disadvantages of Technology

Nature and wildlife are the victims of modern technology. Vehicular emission is the leading cause of global warming, while industrial waste leads to both water and soil pollution.

Harmful elements emanate openly emitted into the atmosphere through the soil, water, and air. This not only affects human beings but also impacts animals and plants negatively.

2. Technology is also the cause of Destruction

With technology, the modern sciences found answers to some incurable diseases such as cancers and Polio Virus. However, technology is also to be blamed for the invention of new weapons. Powerful Countries rely more on modern weaponry such as Nuclear Weapons and warheads which are dangerous for humankind.

Biological warfare is a deadly weapon that was previously used by many nations. Man has used poisons for assassination purposes ever since the dawn of civilization, not only against individual enemies but also occasionally against armies. Thus, it’s easy to understand why modernization is one of the greatly frightening disadvantages of technology.

Social media is one of the most admired inventions of the 21st century where people can connect with others residing in other countries. Internet communication is probably the best reason why people started loving social media. But this gift of technology has its diabolic side too.

Online bullying, harassment, trolling, privacy issues, and spreading fake news are some dangerous impacts of Social media. The worst part is, students and teenagers are the ones who are negatively affected by this gift of technology.

Technology also affects our health severely. For example, different kinds of diseases found in people are caused by extensive technology, such as radiations emitted by mobile towers.

Studies also reveal that the regular and long-term use of microwave devices (mobile phone, microwave oven) at the domestic level can have a negative impact upon the biological system, especially on the brain. Damaged eyesight and hearing loss are some issues that are caused by regular exposure to mobile screens and earphones.

One of the concerning disadvantages of Technology is that it reduces the chances of employment for many. As machines take charge, many skilled workers are rendered jobless. Companies use machines to boost production and save resources.

Technology is also known to degrade the creativity of people as they depend too much on automated setups to save time. Another bad example of it is the use of computers to do manual accounting.

Conclusion on Advantages and Disadvantages of Technology

Understanding the Advantages and Disadvantages of Technology will pretty much clarify whether it’s a boon or bane. What plays a vital role is drawing limits. Smartphones should be smarts but not smarter than humans. So besides relying on technology, it’s most important to keep upgrading your skills.