Advantages and Disadvantages of Living in Oregon 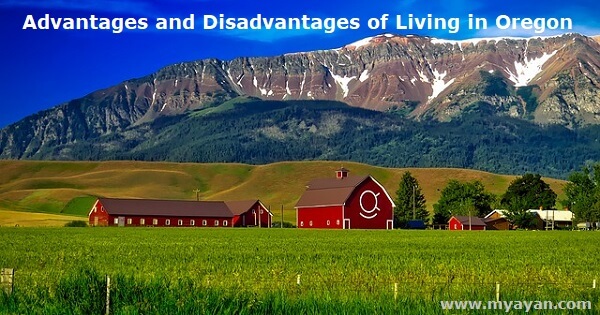 Oregon rests between Washington State and California in the Pacific Northwest and is home to around 4 million people. The continuous rise in the population indicates that the state has overcome slavery and forced labour since the Snake War. The scenario has changed like a landscape, and the state is one of the best choices for job seekers and investors. If you are thinking about moving in here, the Advantages and Disadvantages of Living in Oregon are worth knowing.

What is the advantage of Living in Oregon?

Be it quality of life, no sales tax, or agricultural growth, there are factors to consider as the Advantages of Living in Oregon State. If you have plans to settle in the state considering future opportunities, you might as well look at the following factors to be more convinced.

1. You Don’t Have to Pay State Sales Tax

Accordingly to Kiplinger’s report, Oregon remains among the top tax-Unfriendly States for retirees. The state charges on personal incomes instead to generate revenues. If you are bringing in a vehicle from out-of-state, you might also have to pay vehicle use tax according to the laws. The taxes charged for other services isn’t as high as Sales tax. So one of the biggest advantages of living in Oregon is you can shop online for goods and services as you please.

Oregon grows over 250 diverse products ranging from wheat to salmon. The state’s top agricultural products include milk, nursery stock, hops, livestock, berries, pears, potatoes, eggs, onions, peppermint, wine grapes, cherries, hay, and sweet corn. The state has over 38,500 farms, out of which 96.7% are family-owned and operated.

Nearly 80% of Oregon agricultural products go to the domestic market, while 40% of the farm produce is exported outside the US. The stats are positive indicators for investors.

Oregon is not just surrounded by greenery; the state also has bike infrastructure to encourage people to follow an eco-friendly approach. As a result, Portland has often been named the best city for biking in the United States next to Eugene.

Most cities in Oregon offer bike paths, purchasing programs, and bike clubs encourage citizens to stay fit and healthy. This move can cut down their cost of living and carbon footprints. If you are new to the states, you get to save on vehicle taxes as well.

4. Healthy Environment is one of the major advantages of living in Oregon

The state is quiet, calm, and pollution-free—the greenery surrounding the state's coastline allowing you to get close to the environment. The state also has the lowest carbon footprint in the entire USA.

Oregon is the centre of attraction for having certified environmentally-friendly buildings in the state. In addition, Portland is often known for following Energy-efficiency standards, recycling programs, and utilizing renewable energy sources affordably and efficiently. The State has already found sustainable ways to lead the future generation without needing smart homes.

What are the Disadvantages of Living in Oregon?

Besides the good ones, bad factors are worth considering while living in Oregon. If you have visited the state quite too often, you must have experienced different forms of disadvantages of living in Oregon. Traffic, earthquakes, and living costs are a few to speak of.

1. Driving is a challenge in Oregon

Despite being a bicycle-friendly city, Portland experiences the world’s highest rates of vehicular accidents. The city also ranks among the top 10 most congested American cities. Unfortunately, it’s not just the metropolitan areas, but the problem persists consistently on the highways linking the cities to the borders.

If you don’t want to waste your time in traffic congestion, you can take alternate routes and head to highways. However, provided highways are too slow; you must add extra time to your schedule while driving to the workplace or a remote destination.

2. Higher Rental Costs are common disadvantages of living in Oregon

Most of the people from California want to migrate to Oregon, and the increasing number of incoming people willing to settle in the city has led to an increase in the rental cost. It’s tough to find an apartment, dorm, condo or rented home in the state.

The average cost of a home in Oregon ranges from $300,000 to $500,000 range for square footage below 1,500. The costs don’t seem fair even for small properties. You’ll have to pay $995 for 250 square feet, and at least $1200 for a 400 square feet home. The problems escalate further if you have bad credit or have applied for a new credit card. If you are from out-of-state looking for an affordable home in Oregon, get ready to bide wars and frustration.

3. It’s hard to earn a living in Oregon

Oregon takes the 49th spot in the US for households struggling to make ends meet. Perhaps, higher cost of living, higher taxes on income and property are the reasons. However, factors such as Average wages, unemployment rate, and cost of living are the deciding ones.

According to Moneyrates, Oregon ranked second on the worst American states to make a living in 2015. To add insult to an injury, Oregon also had one of the highest rates of workplace safety incidents recording an increase in worker fatalities in 2014 compared to 2013.

If you are in Oregon, you are not permitted to pump your fuel. According to the state full-service fuel laws, you have to pay an extra amount to get someone else to fill your gas tank at the full-service gas stations.

But paying a little extra is good as you are paying for the employees for providing you service. You can ask them for more if you want. The employees at the full-service station can wipe down your car window or check the engine oil and coolant for you.

Conclusion on Pros and Cons of Living in Oregon

Much of the decision is yours to take once you understand the Pros and Cons of Living in Oregon. With certain benefits such as savings on sales tax and a healthy environment, other scenic places such as beaches and quiet places to look out for. If you have decided to settle in Oregon, you must research on your part about the housing market, which seems to be the only issue so far.

What are the cons of living in Oregon?

What is the best city in Oregon to live in?

In 2021, Portland was named the safest city in the United States and the eighth-best place to live by U.S. News & World Report. It is also one of America's most ecologically sustainable cities. This is incredibly amazing, given that it is also Oregon's biggest city.

Is Oregon a good state to move to?

Oregon has a variety of parks, lakes, mountains, forests, and even deserts. With the Alvord Desert in the south-eastern part of the state, you may journey to gorgeous scenery that makes you forget you're in the Pacific Northwest.

Is Oregon expensive to live?

Oregon is one of the most costly states to live in. In fact, as of July 2021, Oregon was ranked the 5th most expensive state to reside in, with the cost of living 31.43% above the national average.

What is the racial makeup of Oregon?

Among persons living in Oregon in 2016, 76% were white, 13% Latino, 5% Asian or Pacific Islander, 2% African American, 1% American Indian and Alaska Native, and 3% described themselves as belonging to more than one ethnicity.