Advantages and Disadvantages of Living in Chicago 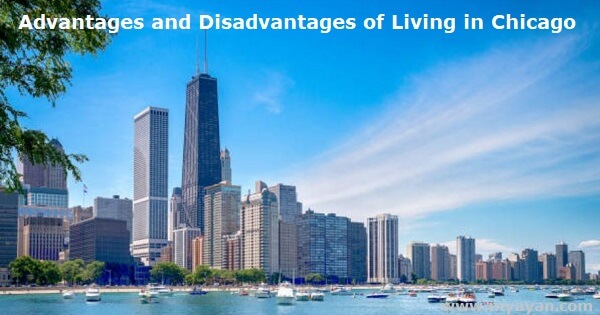 Chicago is America’s third-largest city in terms of the population inhabiting around 2.7 million residents. There are many benefits of living in Chicago that people find a place to settle in here. Famously known as the Windy City of America, Chicago also has a vast history. You may experience the best infrastructure, education system, transit system, and lifestyle while living in a friendly neighborhood. However, there are certain limitations which you need to consider before deciding to move here. Some significant points are explained in the Advantages and Disadvantages of Living in Chicago.

What are the Advantages of Living in Chicago?

Chicago had suffered a few setbacks due to industrialization but has recovered dramatically by focusing on housing, public programs, and administrative works. It’s the lifestyle of independence and confidence in Chicago that never lets you feel old. These advantages of living in Chicago are worth experiencing once you move into the city.

Besides being the American capital of railroads, Chicago is also well-known for its convenient living style. You won’t have to go far to get anything you need. Strolling through the blocks would take you minutes, and you can enjoy the historical architecture of this beautiful city.

The transit system also includes an intercity bus service that makes it easy for commuters and working people. This means you don‘t need to rely on your car or wait for a cab service.

The city rests on the shores of Lake Michigan, which is a perfect place for settlers who like to stay around the beaches. It’s mainly the summer when you can enjoy walking by shores to cool down a bit.

If you own a boat, chances are, you’ll more likely want to stay around the lake for leisure. On the plus side, there are parks, shops, restaurants aligned along the beach that add more convenience to the night walkers.

If you are a die-hard fan of NBA, Chicago is the perfect place to enjoy basketball games. Chicago has also been named among the best sports cities in the USA three times. You may also get to meet your favorite players from Chicago Bulls one day while living in the city. Not just basketball, if you have a sweet tooth for football, Ice hockey, or soccer, watch out for the never-ending fun. Living among.

Chicago has earned a reputation for being one of the world’s best cities for food. Enjoy a wide variety of delicious food and specialized cuisine. If you are here for a visit, make sure to sit and enjoy munches and delights.

The city has its own set of signature dishes which are hard to resist. Be it Chicago Red Hot is an all-beef frankfurter, deep-dish pizza, Italian beef, Jibarioto, or exotic foods; you can get to try anything you like.

5. 24/7 Service is one of the main advantages of Living in Chicago

You won’t have to shuffle through places to get stuff in the emergency. Chicago is where the party never stops. Bars stay open late at night while the shops remain open 24/7. So should you run out of groceries, you can get it even if it’s 3 in the morning.

If you are late for dinner while working late, you can easily dine at Chicago’s finest places and restaurants. Not just food and stores, you can participate in outdoor activities at night as most of the places stay up all night. Given these many advantages of living in Chicago, it’s obvious to this city home.

What are the Disadvantages of Living in Chicago

Living comes at a cost, and so is with the pride of Illinois. From affordability of homes to dealing with traffic snarls, it all happens in the city sitting on the shores of Lake Michigan. Keep in mind other disadvantages of living in Chicago.

The city has a history of homing criminals John Dillinger, Baby Face Nelson, and many others. That’s right; there’s a movie based on their lives (Public Enemies). According to the Chicago Police’s Bureau of records, the city’s overall crime rate is higher than the US average.

Not all the glitter is gold, so if you are working late in the city, stay aware of criminal activities around you. Criminal records are more concerning disadvantages of living in Chicago if you are planning to move in with your family.

If you much attracted to the facilities and lifestyle, consider paying extra even on groceries. Chicago is one of the cities where you have to pay taxes for groceries. The overall cost of living in Chicago is 20% higher than the US average.

Add house tax, rentals, automobile tax, income tax, energy bills, and other utility bills. Get ready to handle the expenses as you plan to move to Chicago. Even the restaurants charge 0.25% tax for something your purchase is ready-made to eat. They can’t be blamed whatsoever when everything is controlled by the government.

3. Traffic problems are the major disadvantages of living in Chicago

With I-90 Highway witnessing 330,000 vehicles daily, the city also became one of the top ten congested cities in the US. Schedule extra 24 minutes while leaving for work because this much time is what you are going to have to waste during the commute.

4. Weather in the Windy City is often tricky

Storms, thunderstorms, and even heavy snowfall can hinder your movement in the city of Winds. The winter season is the lengthiest out of four, so don’t be surprised by icy winds blowing past your head.

Where winters are ruthlessly cold, summers can bring you even worse as temperature peaks to 100F. Make sure, you are well set for the unpredictable weather conditions and have a weather app on your phone.

5. The Parking hassles are a common challenge

It’s just to say that parking problems are as severe in the city as the traffic. The 330,000 vehicles running across the city must need someplace to rest after all. If you own a car, add parking fees to your cost of living as the charges may go as high as $2.25 for an hour.

Trying to find a spot around downtown is hectic and time-consuming. Paid parking seems the best solution in the city where time is worth more than money. Sometimes, you may find taxis and Uber rides more convenient than driving your car through the city.

Conclusion on Pros and Cons of Living in Chicago

Except for the crime rate, much can be adjusted while living in Chicago. Welcoming neighborhoods, historic architecture, 24/7 services, and freedom must outweigh the limitations of this winy city. Evaluating the Pros and Cons of Living in Chicago, you can turn most of the issues in your favor. Consider taking cabs and enjoy the weather conditions. Lastly, learn to blend into the world and make friends with new people.

Chicago is unique because it offers a small-town feel while still providing all of the benefits of a modern metropolis. People love their neighborhoods here, and will welcome you with open arms if you’re willing to contribute and support this local culture. It is one of the few cities where you can legitimately say that there is something for everyone. Most of the people are friendly, the crime isn’t as bad as it seems from the outside, and it is fairly easy to set up your life in a way that benefits you and your family.