Advantages and Disadvantages of Renewable Energy 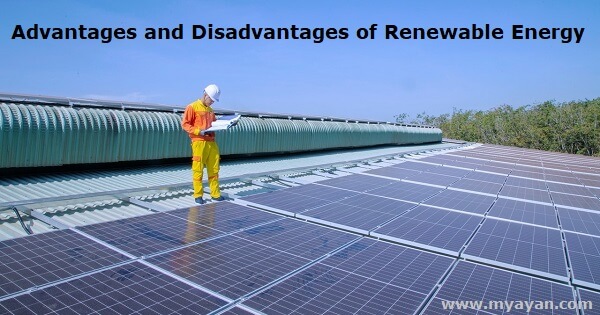 Renewable energy sources are majorly known as clean and effective ways of generating power for various purposes. Solar, Wind, Tidal, and Hydropower are often talked about when it comes to human concerns for climate change sustainability. As countries shift towards utilizing more natural sources, there are merits and demerits to concern. The Advantages and Disadvantages of Renewable Energy explore the pros and cons further.

What are Different Types of Renewable Energy?

What are the advantages of Renewable Energy?

Renewable energy is considered the cleanest of all as compared to its counterparts. Combustion of coal, gasoline, and fossil fuel release greenhouse gases into the environment which has also contributed to Global warming gravely.

On the other hand, Solar, Hydropower, and wind energy are considered eco-friendly since they do not emit toxic gases into the environment. The use of renewable energy sources also allows humankind to depend less on non-renewable sources.

Unlike non-renewables, renewable sources are in abundance and are never-ending. As long as there are wind, sun, and water, energy needs would be replenished over a lifetime of living beings. There is zero possibility that they will run out.

On the other hand, sources like Coal, Oil, gas, and Fossils are considered as limited resources that may deplete in the future. Renewable energy also gives developing nations hope to shift to even more sustainable resources to protect the ecosystem.

3. Reliability is one of the major advantages of renewable energy

Countries relying on non-renewables have largely affected the environment. Their reliance on fossil fuel and coal is may be due to the abundance of such or lack of infrastructure to set up renewable energy options. As a result, many countries have to import oil and gas to meet their energy needs.

By setting up Wind Mills and Solar Panels on a vast scale, these countries can reduce their dependency on other nations and save their crippling economy. Having at least two power generation methods such as Solar and Wind systems could be one of the biggest advantages of renewable energy for many developing nations.

4. Safe for Public and Wildlife

When clean and renewable natural resources are used for energy generation, they emit little to no greenhouse gases or pollutants into the surroundings. This suffices that there will be less carbon footprint and a balanced ecosystem for every living creature.

Humans and wildlife can thrive in their habitat as there will be a healthy atmosphere everyone can acclimate into. Countries would have a chance to spend less on developmental projects rather than disease control.

It’s no brainer that the energy sector boosts a country’s GDP alone. As per the Center for Sustainable Systems, University of Michigan, in 2018, U.S. spent $1.3 trillion on energy or 6.2% of Gross Domestic Product (GDP).

Apart from the economy, more projects based on renewable energy will also open doors for the service sector jobs. For example, the energy7 sector has already created numerous jobs in the UK, Germany. Moreover, more jobs are projected in the energy sector as countries are encouraged to shift to renewable forms of energy.

What are the Disadvantages of Renewable Energy?

Can there be any downsides to using renewable energy? Sadly, yes. From establishments and energy generations the following types of limitations contribute to the disadvantages of renewable energy.

1. Weather dependency is among Disadvantages of Renewable Energy

The technologies used to harness energy through Solar and Wind energy solely depend on weather conditions. Therefore, if the atmospheric conditions are suitable for the installed windmills or solar panels, only the energy can be used for further purposes.

For example, wind turbines can only work in areas with strong winds and Solar cell panels would be effective in the absence of clouds and rain. On the other hand, Hydro generators require enough rain to fill dams for their supply of flowing water.

Renewable energy sources may be a more effective and eco-friendly option than Fossil fuel, but not everyone can have this advantage of renewable energy. In addition, there are challenges based on climatic conditions or lack of capital investment that a country or state may face.

Also, fossil fuel and coal are still in use to produce large quantities of electricity at present. These sources of energy are rather more convenient methods to generate electricity in some nations.

3. Substantial Cost of Setting up

It’s no doubt that to set up the energy generation facility a huge investment is required. This can’t be done by individuals alone as the government/companies must provide huge sums for installing wind turbines, solar panels, and hydroelectricity plants.

The establishment requires upfront investments to build, including the maintenance expenses and prior planning. Also, the electricity generated must reach towns and cities that require more cost of installing power cables and equipment. Huge cost to incur in planning and installation is one of the major disadvantages of renewable energy for less developed nations.

Once generated, the electricity needs to be stored in batteries for transmission for residential or commercial use. The cost that adds up is often overwhelmingly higher than the cost of setting up the power plants, solar panels, or wind turbines.

Besides the storage equipment such as batteries or power grids, the cost of maintenance is also a major concern for companies and governing bodies in many states.

Renewable energy may seem a better option for sustainability than non-renewables, but they are not completely clean. In addition, many renewable energy forms or the involved process emit greenhouse gases into the environment.

Hydrogen energy is produced after Hydrogen gas is extracted from different compound gases such as methane apart from fossil fuel. Moreover, biomass burns organic matter directly into the atmosphere whereas, the radioactive leaks from a Nuclear Power reactor can lead to a severe pollution level.

Conclusion on Advantages and Disadvantages of Renewable Energy

Even though the major problem with renewable energy is the cost, this type of energy is the most eco-friendly option that humankind can survive sustainably. As for now, the only solution to save the environment is to use all types of energy resources in a balanced way. The rest is quite understood from the Advantages and Disadvantages of Renewable Energy mentioned above.