Advantages and Disadvantages of Pacemaker 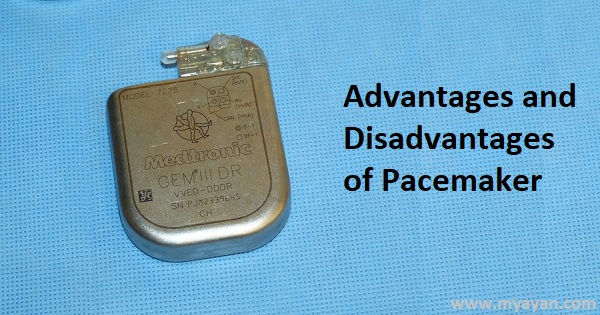 The number of Americans receiving Pacemaker for Heart Failure has risen substantially within the past two decades. As the numbers pace up, experts have predicted that there will be 1.43 million pacemaker implantation cases by 2023. How this medical device can affect your life is what unwound in these Advantages and Disadvantages of Pacemaker implantation.

A pacemaker is a small medical battery-operated device that regulates irregular heartbeat in a patient. This device consists of two parts, the generator (to control heart irregular heartbeat) and the wires (to supply electric pulses).

Why and When Pacemaker is Needed?

Pacemaker Implantation is needed for patients with abnormal heart conditions such as:

These medical conditions also flare up the circumstances When Pacemaker is needed to overcome the unprecedented dangers of Cardiac failure. If you too are recommended a pacemaker for heart failure, it’s time to look up these advantages and disadvantages of the pacemaker implantation.

What are the Advantages of Pacemaker Implantation

Approximately 200,000 pacemaker insertion surgeries take place in the United States alone. The figures majorly account for Bradycardic patients. With the least possible pacemaker risks in elderly patients, around 97% insertion procedures prove beneficial. Here are some reasons why this cardiac device proves to be the most comfortable device to keep your heart fit.

1. The Insertion is life-saver.

Severe Cardiac conditions are not rich people's problems anymore. Not only the developed nations but people from middle and low-income nations are becoming affected by cardiac failure.

Disregarding the age factor of the recipients, surgery is the optimum solution for patients in the latest stages of life.

Elderly patients dealing with Bradycardia, Arrhythmia, and SVT, can lead a comfortable life through a pacemaker insertion procedure. Studies reveal that pacemaker risks in elderly patients are almost zero during operation.

In patients of the most advanced age groups, insertion prolongs life and improves its quality. A study carried out by the US National Institutes of Health also forms the base for the evidence concluding that Pacemaker benefits in long-term survival.

As researchers put more of their effort figuring out the long-term benefits of a pacemaker, there are some that elderly patients can recognize easily. A healthy heart means a healthy life, improved survival rate, and a sense of independence.

Another study documented by NIH reveals that people, as old as 70 years, have fewer or no pacemaker risks and complications at all after a permanent implantation procedure.

4. Life Gets Back to Normalcy

Many people are delusional about life after the insertion of cardiac devices getting less active than before. Proven that pacemaker implantation procedure is minimally invasive, you can lead your life continuing the regular activities like sex. You can get back to normal routine and exercises after 2 to 3 weeks of the pacemaker insertion surgery.

Cardiologists will recommend you taking precautionary measures during pacemaker insertion recovery time. However, taking necessary checks in order is also your part to do besides being active. In case of pain at the insertion site or other problems.


What are the Disadvantages of Pacemaker

After an implantation surgery, some rare cases arise pertaining to pacemaker risks and complications. Depending on drug interaction, sensitivity, or the surroundings, you may face these complications.

The artificial heart is made of titanium, consisting of a pulse generator with a lithium-ion battery (that lasts for 5-12 years), and wires called leads. Several electromagnetic devices generate waves that may interfere with the functioning of your cardiac device.

Most MP3 headphones contain a magnetic material that can interfere with a cardiac device. However, Wireless transmission from cell phones’ antenna poses a very small risk to the patients. High Magnetic field can alter the way how pacemaker works, keep at least 6-feet distance between you and devices with magnetic fields.

Patient discomfort is one of the most reported pacemaker risks in elderly patients after a successful surgery. Many recipients had reported that they could feel the metallic devices causing discomfort during the pacemaker insertion recovery phase. Later, they got used to the sense of the artificial heart present in their body. However, it is normal to feel a little sensation while bending or lying after a procedure.

Although a patient is diagnosed with any reactions prior to undergoing surgery, some people may have some allergic reactions to the anesthetic drug during the implantation. Therefore, patients need to inform the doctors before the insertion is scheduled.

4. Sudden Malfunction of the Device

Although every manufacturer tests cardiac devices for efficiency and any malfunctions prior to approval, a sudden dysfunction can lead to critical risks. When such a situation arises, a pacemaker replacement procedure in time is the only solution.

5. Smoking/Drinking Can Ramp up the Heartbeat

Twiddler’s Syndrome is when the pacemaker generator is displaced or pulled out of the insertion place due to strenuous activities or movement without knowing. This is why patients are recommended to follow strict guidelines after the insertion. Though this condition is very rare to occur, visit your cardiologist as soon as it you experience any abnormality in your cardiac device.

A blood clot may develop in one of the veins at the insertion site which may cause swelling. This is also a rare condition that fixes itself after a few days. Ask your cardiologist for an anticoagulant medication to stop the clotting.

What are the Pros and Cons of a Pacemaker?

Pros: Pacemaker keeps heart healthy even at an advanced stage of life, enhances survival rate, no side effects on patients, and Pacemaker Insertion Recovery is faster.Cons: Although Pacemaker Risks and Complications are rare, one must be aware of infections or allergic reactions, and device malfunction. Electromagnetic devices with higher frequency may put patient's health at a higher risk.

Wireless transmission from the antenna of cellular phones and modern security systems pose small risks to your cardiac device. The frequency produced by these devices does not hinder the functioning of pacemakers.

What is the life expectancy of a person with a pacemaker?

Many manufacturer companies claim to produce devices with a life expectancy of 5-12 years. Generally, an average pacemaker should last for up to 8 years without any replacement or falter.

Can I drink alcohol with a pacemaker?

Alcohol interferes with pacemaker's functioning leading your heart to beat too quickly or irregularly. If you consume alcohol, it may increase the chances of Arrhythmia.