Pros and Cons of Karma Yoga

Let your actions guide your path; this is what Karma Yoga teaches you about. Karma, translated as Deed in English, refers to the way followed by yoga to attain enlightenment and spiritual connection with the Divine through your deeds and actions. One of the four paths, followed by an individual in ancient Hindu philosophy, is to reach the ultimate destination of self-attainment and enlightenment. While some believe there are numerous benefits of practicing karma yoga, many opine differently. If you are a beginner, ensure to understand the possible pros and cons of karma yoga first.

What are the Pros of Karma Yoga?

Karma Yoga, also known as the path of action, is one of the most well-known and commonly practiced yoga philosophies. The basic tenants of Karma Yoga are that everything you do affects the world around you and that by performing your actions selflessly and with good intention, you can help make the world a better place.

There are many pros of Karma Yoga. One of the most noteworthy is that it can help you let go of your ego. So often in life, you get caught up in your own desires and goals, forgetting about the needs of others. Karma Yoga reminds you that your actions affect others and encourage you to act with compassion and kindness.

When you act selflessly to help others rather than yourself, it makes you happy inside. This is because you focus outside of yourself and others, which is a more fulfilling way to live.

3. Connection to the Divine

Karma Yoga allows you to connect with the Divine authentically no matter what faith you are. When you perform actions without any thought of personal gain or recognition, you open yourselves up to receive guidance from a higher power.

As mentioned before, Karma Yoga encourages you to act with compassion and kindness. This can be a gateway to increased spiritual awareness as it teaches you about the interconnectedness of all life.

5. Service to Others is one of the intended pros of Karma Yoga

Perhaps one of the most significant advantages of Karma Yoga is that it allows you to serve others. When you put the needs of others before your own, you create a space for love and connection to flourish.

What are the cons of Karma Yoga?

Just like the positive effects on your health and conscience, there are some cons of karma yoga you may experience down the road. Some of the drawbacks include:

It is not uncommon for people who practice Karma Yoga to experience burnout. This is because it can be very demanding to constantly focus on others rather than yourself.

In some cases, practicing Karma Yoga can lead to feelings of guilt and shame. This is because you may feel like you are not doing enough or your actions are not 100%.

3 Imbalance is among the commonly conceived cons of karma yoga

If you are not careful, practicing Karma Yoga can lead to an imbalance in your lives. This is because you can easily become so focused on helping others that you forget about your own needs.

There is a risk of giving too much when practicing Karma Yoga. This is because it is easy to get caught up in the energy of helping others and lose sight of your own limitations.

Yes, there can be negative consequences too! Karma can come back and bite you in the back if you are not careful and honest. This is because your actions affect the world around you, and sometimes these consequences are not immediately apparent. Hence a belief in doing good and receiving the same may cost you much if you intentionally do something wrong to someone. So consider it among the foreseeable cons of Karma Yoga.

Final Thoughts on the Pros and Cons of Karma Yoga

In conclusion, Karma Yoga has both advantages and disadvantages. It is essential to be aware of both before deciding if this type of yoga is right for you. Keep in mind that the benefits often outweigh the drawbacks, but be sure to listen to your intuition and do what feels right for you. Yoga originated in ancient India but applied to every faith, creed, or caste. Karma Yoga is the path of yoga that teaches you humane practices, what’s for you, is for the other, and all. Happy yoga to everyone. 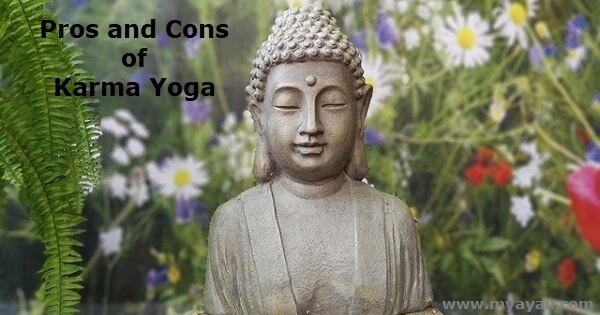 What is Karma Yoga?

Karma Yoga is, also known as Karma Marg, emphasizes your course of action for liberation from worldly illusions. According to ancient Indian philosophy, the right deeds are also considered meditation and prayer. Therefore, karma yoga is accompanied by the rest of the three paths (Marg), namely, Raja Yoga, Jnana Yoga, and Bhakti Yoga, in the journey to your spiritual enlightenment.

What is the Purpose of Karma Yoga?

This ancient practice of yoga was performed in different ways. You remember the royal princes were sent to yogic ashrams to learn humility. These royal kids were treated like the other students receiving Diksha (ceremonial practice between the teacher and the student). The sole purpose of Karma yoga is to enhance your sensibility towards the notion; all are one. Even a little thing you do for others counts.

What are the Benefits of Karma Yoga?

Karma yoga is the path that prepares you morally and works towards your spirituality. This path does not require you to be rigorously involved in poses and physical aspects of yoga. Instead, this path allows you to embodiment your spiritual ideas through your actions.

Karma yoga is the way of unselfish action among the Hindu spiritual techniques. It teaches that a spiritual seeker should act by dharma without attaching to the outcomes or personal consequences. The Bhagavad Gita says that karma yoga purifies the mind.