Advantages and Disadvantages of Urbanization 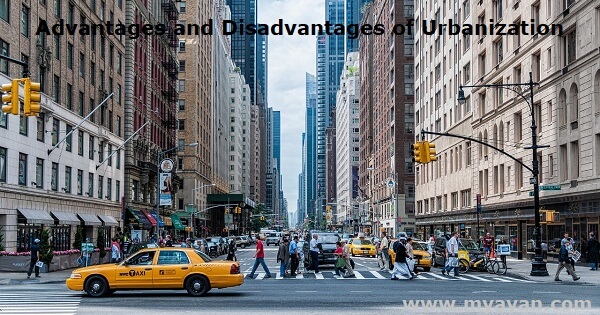 There are plenty of good reasons people move to urban places where job opportunities and access to resources are worth mentioning. But some drawbacks of urbanization also draw the attention of the modern world. Dwellers of the countryside may not have the same opportunities as their urban counterparts, but they enjoy certain benefits such as a healthy environment. The Advantages and Disadvantages of Urbanization investigate the pros and cons before you make up your mind to move to urban areas.

What are the Advantages of Urbanization?

Urbanization is when people relocate from the countryside to an urban area seeking better living standards and career opportunities. People migrate to urban places due to the advancement of modernization and technology, which usually don’t occur in suburbs or villages. The following are considerable advantages of urbanization for hopefuls and job-seekers.

Numerous ways to earn are the common reasons why people migrate to metros like LA or New York. If you are someone who just graduated, there are many ways you can jumpstart your career. You can have your startup, join a company (LLC, PLC, Joint Stock, etc.), or even invest in a micro business.

According to the Gray Line group, Americans move to build businesses and pursue careers in specific fields such as Houston (Energy), San Francisco (Technology), and New York (Finance).

2. Convenience is among the major advantages of urbanization

You don’t have to drive farther to get essential supplies or services to survive. Everything in an urban area is easily available, from groceries to plumbing services. In addition, nothing is too far away from you, as you can pick up your phone and order your Pizza at home.

You have better access to shops, schools, colleges, and even the workplace as you don’t have to spend money and time if you reside in a metro city. Even if you have to commute to different places, you can hire a cab, or travel via bus or trains.

Access to healthcare services is of grave importance for every emergency, whether they live in urban, rural, or suburban areas. The situation is concerning for people living in the suburbs. According to a study, nearly 17 million Americans living in poverty have no usual source of care in terms of personal doctors or health care providers.

On the contrary, healthcare services are quite easy for everyone as there are equipped and advanced healthcare facilities. You can book a visit to the nearest healthcare service via a call or the internet. Furthermore, you can call the emergency helpline and call paramedics in case of a medical emergency.

It’s hard to relocate for many due to financial limitations but if you are relocating to a metro city for a new job; you can find accommodation easily. You can find many options to adjust, especially when you want to live near your workplace.

If you can’t afford a house, you can temporarily find a rented apartment in or around the city. Such advantages of urbanization are worth considering if you have already experienced rural life.

Rural areas or suburbs don’t have too many schools to attend, where parents have limited options for their kids’ education. Whereas cities have more variety of choices for education, such as public and private schools. Your kids have the opportunity to learn through modern learning methods with the help of highly qualified teachers.

If you’ve started a family and are looking to put your kids to the best schools, you can do it easily in a city. Most schools have their websites to allow parents to get in touch with the administration and consult.

What are the Disadvantages of Urbanization?

While the benefits of Urbanization are many from the standpoint of Business, education, health safety, and accommodation, it has certain limitations. The following Disadvantages of Urbanization emanate many concerns even in the 21st-century.

According to the UN’s Report, 4.2 million now live in an urban area, and by 2041, this figure will increase to 6 billion people. Being the hub of economic and technological growth for every country, big cities are also plagued by overpopulation.

Metro cities can also serve as the breeding ground for poverty, inequality, environmental hazards, and infectious diseases. Congestion, Noise, and traffic snarls are common issues dwellers have to deal with on a daily basis.

2. Affording a House is one of the major Challenges of Urbanization

Due to congestion in megacities, it’s hard for a person to find a suitable place for housing. Also, with people living moving to cities, there are fewer options for you to find a decent house or apartments at affordable prices.

Urbanization drives masses away from rural and suburbs, which leads to an imbalance in the population. The movement of people to urban cities leads to a decline in the rural population which is one of the concerning disadvantages of Urbanization. With fewer people living in rural regions, there would be less growth in the rural economy.

A decline in rural population also means a shortage of people working in the farming industry. This affects the agricultural market and impacts the demand and supply in the country, including the urban cities.

Crime occurs more often in urban areas than in rural areas. The leading contributors to the crime rate in major cities are overpopulation, Immigration, and difference in demographic structures between the ruralites and urbanites.

Overcrowded cities also lead to unemployment, and people looking for luxuries or basic needs have to indulge in unlawful activities such as robbery or burglary. Break-ins, carjacking, and stealing from stores are some common issues urbanites have to deal with.

With more vehicles on the road, gasoline cars, and diesel vehicles, urban cities have to deal with a higher level of air pollution. Even smoking deteriorates air quality. The population in Delhi (India) is expected to touch 31 million by the end of 2021. The city is also the most polluted one in India, with the poorest Air Quality Index while ranking 25th globally.

Conclusion on Pros and Cons of Urbanization

The benefits of urbanization lead to a conclusion that the migration will continue as long as rural populations look for better livelihood. However, the limitations of urbanization can be circumcised by introducing sustainable methods. The first one to start with is reliance on renewable and cleaner sources of energy for survival. Because pollution affects not only humans it affects the ecosystem severely. Nations can implement laws to curb problems like crime rates, housing, and population rise. The major issue at hand is to reduce dependency on conventional energy sources.

What are disadvantages of urbanization?

Another disadvantage of urbanization is the diminution of rural communities. There will be fewer individuals living in rural areas due to the increase in people moving to cities. As a result, the population in that region will decrease. Because there will be relatively few people there, that neighbourhood won't have enough members to thrive.

What are benefits of urbanization?

When done correctly and properly, urbanization can lower poverty and inequality by expanding job possibilities and improving quality of life, including improved education and healthcare.

Why is urbanization bad for the environment?

Urbanization also has an impact on the environment beyond the municipality. The volume of rainfall, air pollution, and thunderstorm days all rise in regions downwind from big industrial sites. Urban areas influence not only weather patterns but also water runoff patterns.

What are the effects of urbanization on society?

The development of urban areas can have several adverse effects on society, including the formation of huge populations that compete for limited resources. In addition, overcrowding and slums result from rapid housing creation, poverty, poor hygiene, unemployment, and high crime rates.