Pros and Cons of French Bulldog 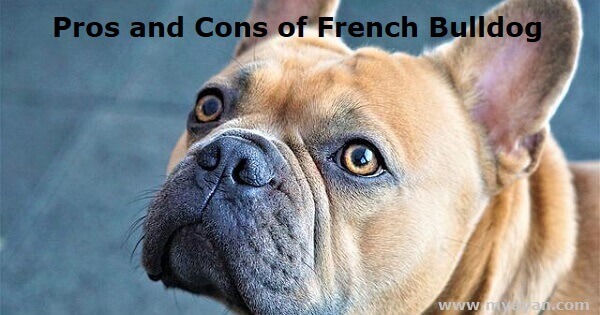 If you're thinking about adopting a Frenchie, there are a few things you should think about first. This breed has grown in popularity over the last decade, but it has also come with an increased number of irresponsible owners. The bottom line is that before you buy one, you need to understand the pros and cons of French Bulldog first. There's a lot to learn before becoming a dog owner, especially with this breed. So let's start exploring further. (Additional Read: All About The Fluffy French Bulldog).

The French Bulldog, also known as the Frenchie, is a small breed of domestic dog. They are popular pets in the United States, Great Britain, Australia, and Canada. It’s a member of the non-sporting species of dogs. They have a short coat that is smooth and easy to care for. They come in many colors: fawn, brindle, black, and white. French Bulldogs typically weigh between 16 and 28 pounds.

Frenchies are gentle and affectionate dogs that make great companions. They are usually good with children and other animals. However, they can be stubborn and require patience when training. According to a survey from the Royal Veterinary College at London University, the French Bulldog's adorable face was the first draw for owners. Still, the breed's loving personality was mentioned by many people as a reason why they urged others to acquire one.

What are the pros of French Bulldog?

The French Bulldog has bat-like ears, big eyes, and a short, stocky build that endear owners to their overall cuteness. However, these dogs have much more to offer potential pet owners than their appearance. From their disposition to their adaptability, there are many pros of French bulldog for pet owners.

Frenchies are known for their even temperaments and loving dispositions. They typically get along well with other animals and children, making them ideal family pets.

Frenchies make a wide range of noises, including snorting, grunting, snoring, and talking. They don't bark as frequently as other small breed dogs, although they do howl in some situations. They also bark when introduced to a stranger or scared, just like any different breed.

3. Temperament is one of the pros of French bulldog

French Bulldogs have been known for their gentle disposition and are excellent companions for single people or families with children. These dogs are typically well-mannered around other animals and visitors, frequently seeking a place to curl up on an open lap. They're easier to manage and adjust than larger breeds because they're smaller breed dogs with an even temperament. These dogs can relax while engaging in playful interaction with their family members.

This breed of dog is one of the easiest to train. They're very intelligent and eager to please their owners, which makes them responsive to basic commands. Although they can be stubborn, they typically respond well to positive reinforcement training methods.

The short coat of the French Bulldog is easy to groom and doesn't require a lot of upkeep. These dogs also don't need much exercise, making them a good choice for pet owners who live in small apartments or have limited time for walks. Minimal costs of maintenance hence come as one of the pros of a French bulldog.

What are the cons of French Bulldog?

While there are many advantages, there are also some cons of French bulldog that potential pet owners should be aware of.

Though they are low maintenance, they are prone to various health problems, including respiratory issues, overheating, joint pains, and eye disorders. These health problems can be costly to treat and may shorten your dog's lifespan.

French Bulldogs have a shorter lifespan than most other breeds of dogs. They typically live between 8 and 10 years, which is faster than the average lifespan for dogs.

3. High Cost is among the cons of French Bulldog

A French Bulldog is undoubtedly a wonderful dog, but they are not cheap. A good breeder may charge anywhere from $1,400 to $8,500 for one of these pups. However, if your Frenchie has any health issues, you should also consider the cost of feeding, vaccinations, grooming products, and veterinary care.

French Bulldogs often suffer separation anxiety when left alone for long periods. This can lead to destructive behaviors, such as chewing on furniture or urinating in the house. French Bulldogs must be with their owners or another dog to feel secure. Given that they are great at companionship, they are also susceptible to loneliness when separated from their owners. It can be one of the severe cons of French Bulldog for pet owners.

The Frenchie is no exception in drooling. While it isn't as much as other breeds, many pet owners prefer pups with less drool. Their short snouts and flat faces make them hard to cool down, which is why they produce so much saliva when they overheat. Frenchies also have loose lips that enable them to drool and spill water on the floor after drinking due to fat, moist lips.

Conclusion on the pros and cons of French Bulldog

So, are French Bulldogs the perfect pet for you? Probably not, but they make a great addition to the right family. If you’re prepared for severe snoring and slobbering, have plenty of time to take your dog on walks, spend quality playtime together, and don’t mind cleaning up occasional messes, then a Frenchie may be perfect for you. And if you don’t happen to live in an area where French Bulldogs are familiar, never fear – plenty of reputable breeders out there would love to help you bring one of these cuties into your life.

The French Bulldog is a high-maintenance breed that will cost more in veterinarian visits than other dog breeds. Fest bulldogs are all common in spinal disorders, heart defects, joint ailments, and eye problems.

Is it worth getting a French bulldog?

The Frenchie is an excellent companion. Not only do they look great in any house, but they're quiet and require minimal exercise, unlike most tiny dogs. The French Bulldog is a lively dog that gets along well with people, children, and other pets.

The Frenchie is the ideal small dog with a big personality, as he is quirky, playful, and full of energy. Its tiny stature and fun-loving nature make them excellent playmates for kids, but like other breeds, they require constant supervision.

Do Frenchies bark a lot?

French Bulldogs are a quiet breed that isn't known for frequently barking, even though there are exceptions to every rule. Because they don't bark much, Frenchies make excellent apartment dogs.