Pros and Cons of Laser Liposuction 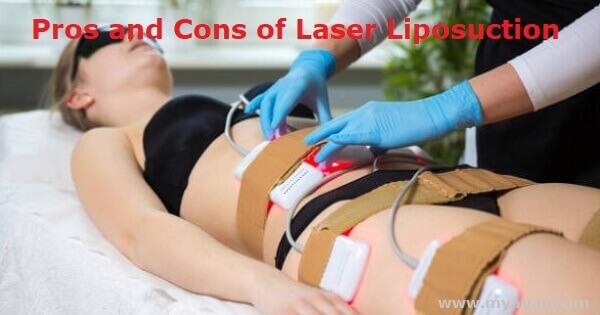 Laser liposuction is a minimally-invasive, body-sculpting cosmetic procedure that uses laser energy to break up and liquefy fat cells. The fat is then removed through a small suction device. It can be used to treat areas of the body that are resistant to diet and exercise, such as the abdomen, thighs, arms, neck, and back. It can also be used to remove excess fat from the face, including the chin and jowls. The procedure is generally well tolerated, with minimal side effects. Recovery time is typically short, and most people can return to normal activities within a few days. If you are considering this procedure, you must consider certain pros and cons of laser liposuction beforehand.

Laser liposuction, also known as laser-assisted lipolysis, is a minimally invasive procedure that uses laser energy to break down fat cells and help contour the body. The steps involved in laser liposuction vary depending on the specific procedure being performed but generally involve the following:

What are the pros of Laser Liposuction?

Just like cool sculpting, it's non-invasive and effective for persons near their ideal weight. The following are some pros of laser liposuction you should know about:

The FDA has approved laser liposuction, one of the most significant benefits. This implies that the treatment has been determined to be safe for individuals who are modestly overweight. This does not mean that the dangers of laser liposuction are insignificant, but it does indicate that they have been studied and proven to be either minor or non-existent. It also means that laser liposuction treatments are subjected to testing and analysis by the FDA.

Laser liposuction is a minimally-invasive procedure. This means that it doesn't require large incisions, and there is no need for general anesthesia. The process is also relatively short, taking only 30 minutes to an hour to complete. Recovery time is quick, and most people can return to normal activities within a few days.

3. Effectiveness is one of the main pros of Laser liposuction

Laser liposuction is an effective way to remove unwanted fat from the body. It can be used to treat areas of the body that are resistant to diet and exercise, such as the abdomen, thighs, arms, neck, and back. It can also be used to remove excess fat from the face, including the chin and jowls.

Recovery time from laser liposuction is typically short. Most people can return to their normal activities within a few days. There are no stitches required, and there is little scarring. General anesthesia, hospitalization, and restricted activity for 2 to 3 weeks following liposuction surgery are typical in traditional liposuction operations.

Patients can resume their regular activities after laser liposuction treatment within just 2 or 3 hours, one of the significant pros of laser liposuction. Because local anesthesia is utilized, patients are conscious and aware throughout the operation, and they don't have to stay at the hospital overnight. The treatment is not considered invasive, so people aren't usually forbidden from doing things following it.

Laser liposuction is considered to be safe when performed by a qualified surgeon. Complications are rare, but they can occur. The most common complication is temporary bruising, swelling, and numbness. These side effects typically resolve within a few weeks. More severe complications, such as infection and nerve damage, are rare.

What are the cons of Laser Liposuction?

Just like any other cosmetic procedure, there are side effects, post-process guidelines, and some major to rare cons of laser liposuction to consider.

There is a price to pay for any type of cosmetic treatment, whether it's Botox injections or laser liposuction. Laser liposuction treatments are typically less expensive than traditional liposuction operations, although they are still costly and rarely covered by insurance carriers.

According to patients' self-reported expenditures, laser liposculpture costs an average of $5,450. Depending on the body area being treated, laser lipo may cost anywhere from $2,500 to $4,500 per location, in the Consumer Guide to Plastic Surgery.

Although laser liposuction is considered to be a safe procedure, there are still potential side effects that can occur. These side effects are usually temporary and resolve within a few weeks. The most common side effects include bruising, swelling, numbness, and redness. More severe side effects, such as infection and nerve damage, are rare but possible.

3. Maintenance is among the common cons of Laser Liposuction

One of the downsides of laser liposuction is that it's not a one-time treatment. To maintain the results of your laser liposuction, you will need to have periodic treatments. The frequency of these treatments will depend on the amount of fat removed, your body composition, and how well you take care of yourself following the procedure.

5. Results May Not Be Permanent

Although this procedure can effectively remove unwanted fat, the results may not be permanent (one of many cons of laser liposuction). This is because laser liposuction only removes fat cells but does not prevent the body from creating new fat cells. For this reason, people who undergo laser liposuction need to maintain a healthy weight and lifestyle to keep the fat from returning.

However, there are also some downsides to consider. One of the main drawbacks is the cost – laser liposuction tends to be more expensive than traditional techniques. So, before deciding, it’s essential to consult with a qualified plastic surgeon and discuss your individual goals and concerns.

Laser fat reduction is most effective for individuals who already have a healthy lifestyle and are seeking assistance with problem areas, such as the waistline, hips, and thighs. With fat laser reduction, a health-conscious person may lose several pounds in a couple of months.

Can laser lipo cause blood clots?

Laser lipo has the same outcomes as traditional liposuction. Because it uses less invasive techniques, you will have a quicker recovery from the operation. There are some laser lipo dangers, such as pain and blistering, but they're minor.

Laser liposuction is a more advanced, FDA-approved cosmetic surgery that targets fatty tissue from specific body regions and contours them by tightening the affected skin.