Advantages and Disadvantages of Washington 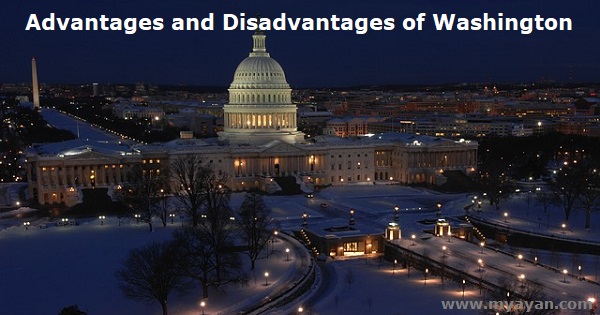 Considering the Advantages and Disadvantages of Washington State is just before you decide to move in. Choosing to be a part of the 13th most populous state in the US is a big move in many aspects. The majority of the residents prefer to live in Seattle mainly due to business and work opportunities. The perks of beautiful nature and career-building opportunities bring many aspired ones to the largest city of Washington. Irrespective of the staggering crime rate and higher cost of living, many would want to settle in Washington. If you are one of many, do heed to the pros and cons of living in Washington.

What are the Advantages of Living in Washington State?

Perfect for outings and spending time with your loved ones, Washington State is becoming more of an attraction for many. The following Advantages of Living in Washington State are why most people intend to settle here with their families.

If you have decided to move to Washington, natural beauty must be one of the reasons. The scenic beauty is something that draws everyone to this state. So, Olympic National Park, Mount Rainier National Park, San Juan Islands, and Festivities of Leavenworth town, or the mysterious Puget sound, choose your best outdoor activity and pack your bag.

The adventurous mountain ranges are most suitable for hikers and explorers. Washington has 120 national parks, and every single on them has something unique awaiting your presence.

2. Jobs Availability is one of the main advantages of Washington

Job is one of the prime reasons why everyone wants to immerse into the state’s culture. Some of the world’s leading companies are headquartered in Washington, providing millions of jobs to people.

The state is a hub for tech companies, multi-national companies, and Defence Organizations. The unemployment rate in the state was around 5.2% in 2021, which is still comprehensive in the post-pandemic era. It’s one of the states where you can easily find a job for your profile.

Instead, the state authorities collect for roads, law enforcement, educational institutions, and other services in the form of real estate and sales tax. The best part is that all these taxes are collectively not as high as the other states'.

Not just the education, the lower fee structure makes it possible for many in-state and international students to settle here. IN 2015, the state government had reduced tuition fees for 4-year colleges by 15-20%, which was acknowledged as a significant move.

If you have planned to make a big move, your family is likely to enjoy the delights of the state. Washington is one of the friendly states in the US where you are allowed to take your pets for an outing (if you are living single).

But taking your family outdoors sounds even more fantastic, especially when you are surrounded by the world’s finest diners and restaurants such as Bark! Espresso, Discovery Park, and Blake Island State Park. Don’t forget to pay a visit to the natural beauties.

What are the Disadvantages of Living in Washington State?

Natural hazards, higher cost of living, and crime rate are a few concerning factors before moving to the state. Some other disadvantages of Washington are listed below to well-inform you.

When it’s winter, you‘ll feel freezing; when it’s summer, you’ll be sweaty enough to reconsider your decisions. The annual rainfall of around 73 inches adds insult to the injury. You’ll have to face around 150 days of the rainy season which are enough to hinder your daily routine.

The state is also home to volcanic eruptions, mind living by the shoreline as it’s prone to tsunamis. If you are fond of sunlight, that’s mostly unbearably available during summer.

It’s obvious to get stuck in the traffic when you live in a state with plenty of jobs and numerous tourist attractions. These two reasons are why many people relocate to Washington and crowd it.

Being among 7.8 million is one of the major disadvantages of Washington in terms of choked state roads and highways. The traffic becomes a bottleneck whenever an accident happens. According to the State Transportation chief, Washington is one of the states where you can’t avoid traffic jams.

3. Higher Living Cost is among significant disadvantages of Washington

Even though your average salary is higher with plenty of opportunities to grow here, the cost of living is staggering. You may be able to save more on income or corporate tax, but the price of homes can be worrisome for you.

The average cost of living in Washington is 118.7, which is higher than the national average. You may have to deal with higher sales of groceries and transportation. According to Zillow, average cost of a home in Washington was $3 69,900, while the same home was priced at $2 36,100 across the U.S.

Crime is always the major problem in a state with a mixed society. Before you decide to move here with your family, it’s something you might want to reconsider. Safety is of utmost concern in a state where robbery, rapes, and Domestic Violence.

According to the annual crime report presented by the Washington Association of Sheriffs and Police Chiefs, the crime rate against property has risen to 13.8%, while homicide cases have increased by 46.6%. However, the rate of crime against persons, society, and violent crimes has fallen.

Blame it on the poor weather, higher cost of living, or perhaps the increasing population; the state has one of the highest numbers of homeless people. Seattle makes it to the third city in the US with the highest homeless population.

Since the post is legal in the state, it’s common to encounter people abusing drugs and living in tents. Besides, the state also ranks lower when it comes to providing optimum healthcare services.

Conclusion on pros and cons of Washington

Upon evaluating the pros and cons of Washington living, you’ll find the positives outweigh the negatives. That’s probably because of human spirit. If you have plans to move in single, with your family, or with your special someone, the state always has a welcoming nature of the state.

What are the advantages of living in Washington?

For those who live in Washington, there is so much more. Here, people enjoy endless options for outdoor recreation, abundant job opportunities, a thriving small business community, and diverse housing options. And some might point out the absence of something ? income tax ? as a perk of Washington living.

Why you shouldn't live in Washington?

Winters are too cold, and summers are far too hot. It's not easy to have the entire year. From November to March, residents of Washington despise their lives; but if they live in a place without air conditioning (Western Washington), they despise them all over again in July.

Is Washington good to live?

The state of Washington is one of America's most beautiful, offering an excellent quality of life as well as spectacular surroundings. With over 100 mountains in the state, it's safe to say that Washington is a paradise for the outdoor enthusiast who enjoys trekking, mountain biking, and climbing.

Is Washington a friendly state?

You may get ideas and inspiration from people all across the country and even from other parts of the world. Living in Washington state allows you to experience a lot of diversity. Furthermore, the state has a kind culture that is open to newcomers. And folks are incredibly nice.