Advantages and Disadvantages of Cloning Animals

Many remember the first successful cloned animal Dolly, “The Sheep.” This cloning experiment was done on 5th July 1996, marked as the day of a technological revolution in the history of medical sciences. But 277 failures are before Dolly’s birth elicit many contradictions of Cloning Animals. Moreover, even if Animal cloning is successful, many questions trigger concerns among society. The Advantages and Disadvantages of Cloning Animals assess how the process scale on various parameters.

What are the Advantages of Cloning Animals

Dolly, The sheep, was born without following the natural breeding process and lived for 6.5 years. The cloned sheep also birthed six lambs in Bonnie, Sally, Rosie, Lucy, Darcy, and Cotton. Thus, even though born artificially, Dolly lived as a naturally born animal. This sets a stage for modern sciences to proceed to advance experiments further. Thus the following can be termed as advantages of cloning animals.

1. Cloning animals can save species on the brink of extinction

Due to constant climatic change, many animal species are either extinct or are on the verge of extinction. Cloning Animals through genetic engineering can be the only option scientists have to restore the balance to the environment.

If animals become extinct because their habitat no longer supports life, the outcomes in the local region can be very drastic. Cloning could help restore this equilibrium by reintroducing cloned animals that are either extinct or endangered.

The meat industry is a significant revenue generator for the US economy, which is predicted to reach $1.5 trillion by 2022. Moreover, as per recent studies, the global population is speculated to grow to 10 billion by 2050. Considering the vast demands, animal cloning would be an effective and economical way to avoid a food crisis.

Also, The Food and Drug Administration has approved the use of meat and milk from cloned cattle, pigs, and goats traditionally used as food. It said that such meat and dairy was “as safe to eat as food from conventionally bred animals”.

3. Production of Selective breeds in animals

Genetic engineering is the key to producing healthy breeds, but Scientists can also create particular breeds of animals relevant to specific purposes. For example, cattle produced through cloning can help ramp up dairy production, while a separate breed of the same species can be created for reproduction.

The technology could also be used for commercial uses to provide benefits to the meat industry. The advantages of cloning animals are almost limitless when considered on a commercial scale.

Dairy farmers are often at risk of disease transmission from cattle. Most viruses emanate from animals, eventually affecting humans. As a result, 1 in every five people gets sick with Flu even if they are vaccinated.

The flu virus commonly originates from Pigs and Birds. The use of perfectly healthy cells for animal cloning means animals are healthy and immune to such infections. Thus, animal cloning opens the door for safety against the flu epidemic that affects populations.

5. Quality is one of the main advantages of animal cloning

Many people around the world are hesitant to accept cloned animals' meat for food. Cloned animals are as healthy as naturally birthed ones. Also, the FDA’s approval to use cloned animals for the food industry means all the things have been taken care of.

If a product made from cloned animals passes the quality test as per FDA's regulations, it's safe and high in quality. This means the meat of cloned animals has the same amount of nutrients as a naturally bred one.

What are the Disadvantages of Cloning Animals?

Though cloning animals for commercial and personal use seems quite like a miracle for people, scientists still have many challenges ahead. The following disadvantages of cloning animals may be termed as the unprecedented limitations of this technology.

The first cloned sheep Dolly was born after 277 failed attempts. This makes up to 1% chances of survival rate of the animal. However, researchers still have a lot to improve to succeed without wasting time and resources on experiments.

Even if the cloning process is successful, the newborn's health may be at several risks due to external and internal factors. Where naturally bred offspring relies on the mother’s feed, not every offspring survives on artificial supplements in a closed environment.

2. Cloning animals is an Expensive process

Replicating an animal comes at a cost. A bull costs around $20000 to clone, while cloning a kitten is worth $25000. The cloning of dogs is instead doubled than what’s mentioned. Also, for every attempt of cloning, there are resources, time, and effort in use whether is succeeds or not. This means cloning would only be a dream for millions, so people as the privileged class might benefit from animal cloning.

This disadvantage is another issue that is coming to a resolution in the near future, but it still impacts the current generation of animal clones. When scientists create a clone, then there is a higher risk that the animal will not have the capability of producing offspring. If that impairment doesn’t exist, the risk factors stay higher than they do with natural reproduction for the next generation.

In the cases when offspring can be born from reproductive efforts, the risks of congenital disability stay high until the second generation – what we would call “grandchildren.” We also have no long-term data about how family lines could be impacted by cloning processes.

4. Cloning animals slow down the rate of reproduction

With animals cloned on a commercial, there will be no natural process of breeding. As a result, animals with the highest levels of genetic similarity tend to have the lowest rate of reproduction. For example, Cheetahs belong to the cat’s family, sharing 99% of their genome with other animals.

Male cats have low sperm production rates, and a little genetic variety passes along upon a successful mating. As a result, cubs are often born with severe birth defects. Given that breeding programs have failed previously, the same is predicted to happen with other species.

Even if a pregnancy matures using a cloned embryo, the birth may not happen naturally. In most cases, the animals would have to go through a Caesarean Section Delivery. This also puts the mother’s life at risk.

Conclusion on Pros and Cons of Cloning Animals

After clearly getting to the pros and cons of cloning animals, one can understand how the technology would come up to the expectations of the 21st century. The cloning methods still need to rectify in terms of success rate and acceptability. Many still may not understand animal cloning processes at present, but with intelligent inventions and advancements, cloning might become a catchphrase for the next generations. 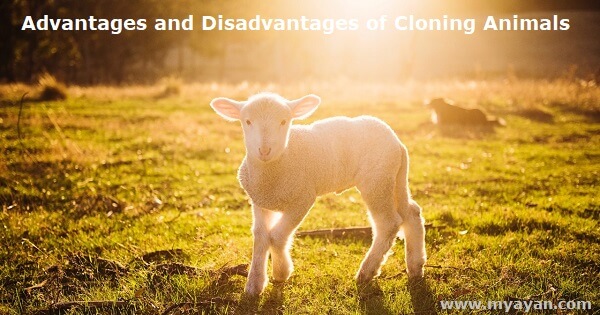 What are the disadvantages to cloning animals?

1. The process of animal cloning is the least successful approach to having offspring.
2. The costs of cloning are prohibitive.
3. Cloning procedures may alter the genetic structure, causing mutations.
4. It would eventually limit fertility rates.

What is the advantage of animal cloning?

Clones are superior breeding animals that are used to produce healthier kids. In addition, animal cloning has several advantages for consumers, farmers, and endangered species: Cloning enables farmers and ranchers to speed up the growth of their most productive livestock to create more safe and nutritious food.

Why we should not clone animals?

The animal clones face some of the most severe issues: They are far more likely to miscarriage, have congenital disabilities, get severe diseases, and die prematurely than other animals.

Cloning benefits animal health and is less invasive than other types of assisted reproduction, such as in vitro fertilization. Furthermore, because these breeding methods can improve an animal's overall health and disease resistance, cloning will substantially decrease animal pain and suffering.

Clones are more susceptible to disease than parental animals. The study also revealed that just four out of 100 cloned pigs died before reaching adulthood, about the same number as non-cloned pigs. However, clones have a shortened life span and suffer from severe health because of their early treatment, immunosuppressants, and other expensive drugs.