Advantages and Disadvantages of Industrialization 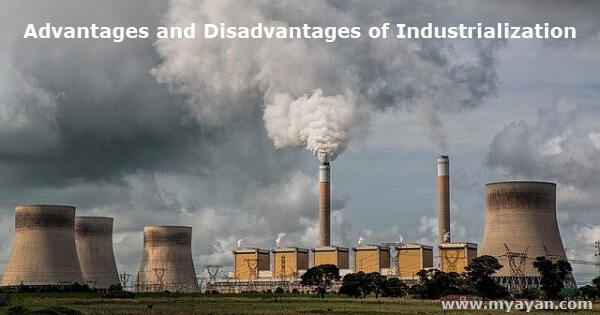 Proving beneficial to massive population, the Industrial sector has revolutionized the way of working and living standard of the world now. Enhancing the living standards of billions of people, the industrial sector has paved new routes for socio-economic development. But how well Industrialization scales on parameters when it comes to the environment and wildlife? The Advantages and Disadvantages of Industrialization discuss further considering all the aspects of it.

What are the advantages of Industrialization?

It’s an undeniable fact that without the Industrial sector, no economy could flourish. The manufacturing and Industrial units offer many advantages to civilization in many different ways. Some of the Advantages of Industrialization are listed below.

Manufacturing goods locally helps you reduce costs of purchase and shipping. Producing goods on a large scale for families that’s easily accessible to the people is one of the remarkable advantages of Industrialization.

From food to essential supplies, the population driven by industrialization can get the basic amenities faster. Also, as supplies go up, the prices ultimately get reduced. This results in enhanced quality of life as the products required are affordable to everyone.

2. Industrial Inventions save time and investments

As society progresses towards modernization, new industrial inventions replace the traditional systems. For example, cars running on gasoline will be replaced by electric cars or hybrid vehicles. Likewise, communication is made easier as Internet services are ramped up by fiber replacing the old telephones.

The industrial sector comes up with new inventions that are both time-saving and less costly. The automated system also leads to fewer errors at manufacturing plants and factories hence boosting the production process. Companies can get the work done by machines rather than depending on human labor. The management can save hugely in terms of resources and utilities spent on labor and workplace hazards.

With advanced technological systems such as CT Scans and MRI, doctors can detect and diagnose the commonly unidentified issues. In addition, industry-made devices such as Pacemaker, hearing aid, and prosthetics have provided hope to millions of people worldwide.

Many of the advances that led to the development of modern medical practices happened because of the efforts of the Industrial Revolution. It’s possible to make more instruments, such as test tubes, scalpels, and lab equipment, at a lower cost. The healthcare sector has become more advanced at treating once incurable diseases.

4. Employment is one of the main advantages of Industrialization

Every industry requires skilled workers to manage the workplace. One of the greatest advantages of industrialization is an employment opportunity for the deserving. It means a person can make wealth with a decent job as an employee and maintain their living standard.

Every machine needs workers and professionals to handle the operations without fail. Regular work means regular income for all and hence a balanced life. Not only can people afford basic amenities, but they can also get their life insured through what they earn.

The manufacturing and industrial sectors contribute fairly to every country's GDP. Whether it's a developing nation or already developed, the industrial sector has its proportion of contribution to the economy.

What are the disadvantages of Industrialization?

Everything comes at a cost, and so is the case with industrialization. From environmental concerns to the societal viewpoint, these disadvantages of Industrialization scale differently for every country.

People looking for jobs switch to industrial towns and cities to earn better wages and improve their livelihood. This results in overpopulation. Shortage of housing space, traffic issues, and expensive property are some common drawbacks of Industrialization.

A heavily crowded city such as Delhi (India) has common disadvantages of Industrialization such as sewage & sanitation, contamination of the local drinking water, shortage of land space, etc. Moreover, with masses of people living in the same area, challenging working conditions, and unsafe lifestyles, there can be numerous disease outbreaks.

2. Pollution is one of the major disadvantages of Industrialization

Industrialization also brings its darker side as industrial waste is either drained to local water bodies or emitted into the environment directly. Bhopal Gas tragedy, Windscale fire, or even Chernobyl Disaster are the gravest reminders of Industrial Hazards.

Besides Noise, Air, Water, industrial waste also leads to soil pollution as it makes the land unusable and less fertile for agricultural activities. These disadvantages of Industrialization have led to global challenges such as biodiversity reduction, water crisis, habitat destruction, and even global warming.

Every industry is profit-driven; many companies look to maximize their profit by increasing the levels of production. As a result, many company owners either sideline the workplace safety protocols or find cheap labor to ramp up the production.

Companies looking for cheap labor don’t want to invest in workers’ safety measures. For example, in many chemical industries, the equipment is usually unmaintained and dirty, expelling soot, smoke, etc. that leads to several issues and accidental injuries.

Since industrial areas are infamously known for emitting all types of pollution, finding space to live in such areas is extremely difficult. The industrial environment not only deteriorates the land but also degrades its value.

In addition, when the cities become crowded with people, the living conditions are impacted directly. For example, when masses of people live close together in unsanitary conditions, it is not unusual for diseases to start spreading rapidly.

The United States gets 81% of its total energy from oil, coal, and natural gas, all of which are fossil fuels. Nearly 26% of fossil fuels are used for industrial purposes.

Every small to big industry requires energy to carry out its 24/7 operations. Nowadays, many factories use fossil fuels to produce goods and services. However, consumption of fossil fuels at a large scale also causes environmental concerns, including global warming.

Based on these Advantages and Disadvantages of Industrialization, a few things must be to keep things balanced. For example, excessive release of toxic waste must be monitored by the appropriate authorities, stringent rules must be formed to put worker safety in the first place, and measures need to be followed to protect the land from degrading.