Advantages and Disadvantages of Cashless Payments

The cashless economies have redefined the way businesses and markets run today. Sweden, China, UK, South Korea, Finland, and Australia have already tuned into cashless societies. With the advancement of technology, the world relies more on electronic payment systems than cash. Although some economies seem to thrive on cashless payment mode, the underdeveloped ones still need considerations. The Advantages and Disadvantages of Cashless Payments explore the pros and cons of the new method from different aspects.

Reports state that the year 2020 will be the turning point for many economies as the consumers shifted more towards the eCommerce sector during the pandemic. With digital wallets, e-banking, Credit Card /Debit card use, and Point of Sale replacing cash, much can be speculated about the future.

The growing trend of people relying on electronic payments rather than actual cash means it would eventually eliminate some risks such as violent crimes (burglaries or robberies).

What are the Advantages of a cashless payment?

The wave of the internet and IoT has an integral role to play in bringing the revolutionary concept to reality. As the countries step into modernization and hi-tech era, there are many advantages of Cashless payments to think of. Some of them are as follows.

Cashless payment benefits are numerous if seen closely from consumers' and service providers' perspectives. When people follow social distancing, it's the best way to pay without putting anyone's life at risk.

Stats speak of facts that most people used online payment systems for shopping for groceries and essential supplies during the Covid-19 pandemic. Electronic payment methods let you buy products and services without any hassles; you can do it from the comfort of your homes.

When consumers do more transactions through Credit cards, the issuer companies offer several types of incentives to users. Companies usually do this to encourage cardholders to use more of their services. If you do digital transactions, you can save a lot on tax and transaction fees.

Also, note that withdrawing cash from ATMs costs you extra in terms of fees and commissions. However, with cashless payments, you can save a little each on gas stations, grocery stores, online shopping, etc., ultimately saving a noticeable amount.

The cost of using a digital payment system is extremely low. You’d have to pay huge taxes while sending money to someone in another state. Normally, bank transactions require huge amounts of infrastructure. You’d have to depend on the bank branches, tellers, clerks, electronic systems, etc.

The same happens on the receiving end, which leads to an increment in the cost of transactions. Driving to the bank is a whole different hassle. However, digital cash does not need to depend on anyone but yourself. By using internet services, you can transact anywhere and anytime without additional costs and taxes.

Many banks use SWIFT transactions these days, using which you can take a few moments to assure that the payment lands in the right hands. In addition, gateways like Moneygram and Western Union use highly secure methods to ensure the payment made is safer and sound from sender to receiver.

Black money is one of the concerning problems for many countries. This money is usually used by terrorist organizations, drug cartels, and even corrupt people. When society is entirely cashless, the greatest advantage of digital payments would be eliminating tax evaders from society. There will be no money to launder for unlawful activities.

All the money flowing through online payment gateways, POS, and centralized banking systems is tracked and recorded. This process makes it easier for government to track tax evasions and spot frauds. In addition, keeping track of your financial activities, the government is assured that you are a regular taxpayer.

What are the Disadvantages of cashless payments?

Being beneficial to many, the cashless payment system also emanates some formidable problems to the others. Major disadvantages of cashless payments spring from the society itself hence leading to privacy issues and technological limitations.

1. Some transactions are untraceable

Cryptocurrency has emerged as the new model of online transactions in the current times. With millions of people already have invested in Bitcoin, no one knows about the source of this blockchain and how people can misuse it. The transactions done through cryptocurrencies such as Bitcoin or Dogecoin are untraceable due to no intervention of the governments. The money turned into cryptocurrency can easily be used for illegal purposes.

Cashless payments primarily use the internet or IoT, which means the system has to have a loophole vulnerable to hacks. Hackers might likely break into the system and steal user’s financial information.

As per FICO Report, recently, credit card fraud cases have spiked surprisingly during the COVID pandemic. Those who transacted through wire or credit cards were the victims of prying eyes sitting somewhere behind their screens. The loss of billions of dollars brings the eye-opening disadvantages of the Cashless Payments to life.

According to a Federal Deposit Insurance Corporation survey, around 14.1 million Americans don’t have a bank account. A majority of them are immigrants living on lower incomes. If the entire retail chain goes cashless, people relying on cash will be left behind.

Citizens with bad Credit will also have to deal with the same issues. However, cash-based systems would also lead to less discrimination and social differences. According to another report, 17% of adults are likely to struggle in a cashless society in the near future.

Smart cities have already sparked concerns, second to which are privacy issues among users going entirely digital. With user data exposed to governments, it would be easy for the authorities to manipulate society, businesses, and groups.

Governments with the power to control a nation may trigger situations like a political dictatorship. Even today, many households do not like the idea of being tracked by marketing companies. Such disadvantages of cashless payments may turn out to be major setbacks to people’s liberty.

A cashless society depends entirely on the internet and IoT, which means a momentary technical glitch could lead to the loss of millions of dollars. The infrastructure needs to be highly sophisticated and robust to deal with billions of online transactions simultaneously.

Provided the internet technology also depends on uninterrupted power supply, countries would also have to ramp up methods to power and operate Servers continuously.

Conclusion on Pros and Cons of Cashless Payments

Before shifting entirely to online payment systems, organizing the Pros and Cons of Cashless Payments is a smart move. Even though electronic transactions sound too fascinating to falter, the current situation and limitations mark a question on the use and misuse of the technology. As for now, carrying some cash in the wallet could help you stay safe on rainy days. 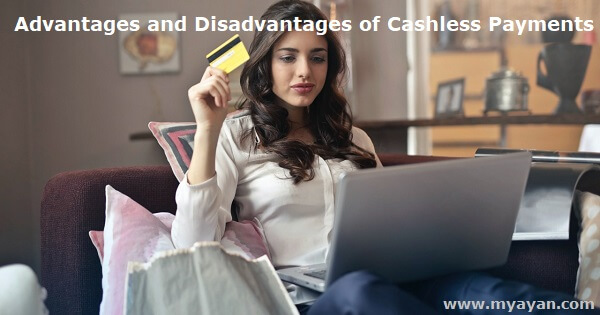 What are the advantages of cashless transaction?

Going cashless simplifies one's life and authenticates and formalizes various transactions. This helps to limit corruption and the black-money flow, which results in an increase in economic expansion. In addition, the printing and transportation costs of currency notes are decreased due to going cashless.

Is cashless better for environment?

Cashless transactions are quick, efficient, and painless to use. They are, however, bad for the environment. Cashless payment technologies require manufacturing devices, data centers, and communication networks to function; these sectors are among the most polluting on our planet.

What are the disadvantages of a cashless society?

Going completely cashless poses a few risks. One of the biggest problems is that an entire economy can crash if power or communication grids go down. And criminals are using increasingly sophisticated technology to steal digital money by hacking into bank databases.

Why is digital payment better than cash?

When it comes to financial transparency, however, most consumers are divided. While 68% feel that digital payments provide greater financial transparency (better insights into how, when, and what money is spent on) than other payment methods, a comparable percentage believe that such payments have better offers, incentives, or cashback than others.