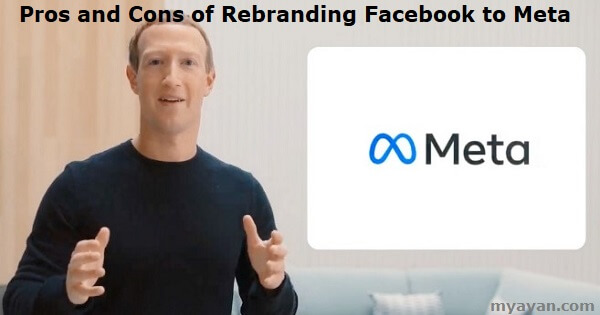 Mark Zuckerberg’s Facebook got its new name and is now known as Meta. The company’s CEO promised to introduce new things including 10,000 more jobs. However, critics opine differently on the decision made by Zuckerberg. Where some believe it will help rebrand the business in the ever-evolving technological era, many say it’s going to impact the company Meta negatively. The short discussion sheds light on the Pros and Cons of Rebranding Facebook to Meta.

What’s the Plan Ahead with Metaverse?

The term Metaverse or Meta has become the buzzword these days as Facebook becomes a done and dusted name for many. Facebook’s CEO Mark Zuckerberg revealed that he had renamed his company to Meta Platforms Inc.

According to Mark Zuckerberg, the transformed platform will be more dedicated to the "virtual environment" you can enter. It's a limitless virtual world of connected virtual communities where individuals can interact, work, and play using VR headsets, augmented reality glasses, smartphone apps, or other technologies.

Facebook's virtual environment can also be used to visit online stores, go on virtual trips, view or make art, etc. Businesses using Facebook's Oculus VR headsets have introduced Horizon Workrooms as a meeting software. Employees can also participate in a virtual office, and users can move between virtual realms created by different organizations. There are certain Pros and Cons of Changing Facebook’s Name to Meta.

What are the Pros of Rebranding Facebook to Meta?

The brighter side of rebranding Facebook to Meta is clear and crisp.

1. Everything will be Centralized

Many metaverse platforms are built on blockchain technology, making central control impossible. According to Dave Carr, communications lead at Decentraland, a virtual world organization. "People are using cryptocurrencies in this virtual environment to acquire real estate and other digital items as Non-fungible tokens (NFTs)".

It will be simpler to sell unique edition digital goods like NFT, exhibit them in your digital space, and even resell them to the next person securely. As stated by Reuters, Carr went on to say that Decentraland's metaverse environment is decentralized. Facebook's intentions are most likely focused.

2. VR will be Popular

Earlier, Metaverse users were optimistic that Facebook's presence in the metaverse would increase interest in the virtual world concept. In general, it would attract more people, and help other virtual worlds develop.

Tristan Littlefield, the co-founder of NFT firm nft42 and a metaverse user since 2018, stated that his first response to Facebook's announcement was "that a big entity like Facebook is stepping in and just waste billions of dollars." Still, it may have a beneficial impact because of the creation of fresh people it would bring into space.

In 2021, virtual reality will be a standard feature of internet life, and it'll come to smart homes and eventually cars, as well. As with any other technology before it, digital goods will become more prevalent in the online world. And this won't just apply to gaming. Several other industries could benefit from VR technology in the future, eSports and film production are among them. The Metaverse Document claims that delivering what consumers expect and desire is the best approach to break through their ignorance of VR rather than shocking or startling customers.

Victoria Petrock, an analyst who follows new technologies, explains that "this is the next step in communication where everything begins to fall into place in a seamless doppelganger universe, so you can live your virtual existence just as you would your actual one".

What are the Cons of Rebranding Facebook to Meta?

There will be several cons of changing Facebook’s name to Meta and users should be aware of them.

1. Facebook is Likely to face More Questions in the Future

Facebook is also coming under fire in the United States Congress and the media after a former employee, Frances Haugen, leaked documents or reports dubbed the "Facebook Papers," revealing numerous issues on Facebook that were not addressed and were instead ignored.

According to a study, Facebook is aware of the drug, and human-trafficking problems on its site yet have taken no action to address them.

Another chapter to the growing story surrounding Facebook has been added, with a new report from The New York Times stating that an inside study ordered by the firm discovered that many people were experiencing "stress and worry" due to using the "Like" button.

2. Meta is Already a Registered Trademark

According to the Guardian, the name change of Facebook to Meta was opposed by a gaming PC firm based in Arizona, USA.

Meta's co-founder, Zack Shutt, announced in December 2020 that the firm would be listed. Their team learned about Facebook's plan to use Meta for rebranding last week when Mark Zuckerberg revealed it on his blog.

In other words, two months before the renaming of Facebook to Meta, his organization had obtained an official trademark registration for Meta and received a government certificate.

According to Zack Shutt and another Meta PC founder, Facebook CEO Mark Zuckerberg tried to buy the Meta name, Joe Darger;. They would refuse to sell it for less than $20 million.

According to Forrester's study, which polled 745 people in the United States, Canada, and the United Kingdom, most respondents (75%) believed that changing the corporate name on Facebook did not necessarily improve trust.

Alexandria Ocasio-Cortez, a member of the House of Representatives from New York, is one of many lawmakers who believe Meta might be dangerous to state institutions and individuals.

Conclusion on the Pros and Cons of Rebranding Facebook to Meta

Facebook was one of the first big businesses to declare that all employees could work full-time remotely during the pandemic and that return-to-office plans would be postponed until 2022. Still, the rebranding may help retention and recruitment efforts for metaverse professionals who would be involved in "the opportunity to work on something amazing with a large budget," according to Holtom. But the public and people who aren't involved in metaverse work are unlikely to benefit, according to Holtom: "I think they're at significant risk".

According to the letter published on the brand's website, Facebook chose Meta because of its associations with potential and a future with more to build. In Greek, the phrase means beyond. Therefore, we opted for Meta since it can also mean beyond, according to the statement.

Facebook (the parent company) announced that it is renaming itself Meta in a post on its blog. The Metaverse, which fuses social media with virtual and augmented reality, will be the company's main focus in the future. The name Facebook will remain unchanged, despite the rebranding.

What is Meta going to be?

In the Metaverse, people use virtual reality headsets to interact and fight alien invaders. In addition, VR headsets will enable users to connect in a virtual world, collaborate on projects, and explore destinations using 3D renderings of real-world locations. According to Mark Zuckerberg, the Metaverse may eventually replace the internet as we know it.

What is Meta rebranding?

The company's rebranding, according to Meta, was meant to shift the firm into a position as a Metaverse business. The term metaverse is derived from science fiction and refers to a version of the internet that people use virtual-reality and augmented-reality headsets to access.