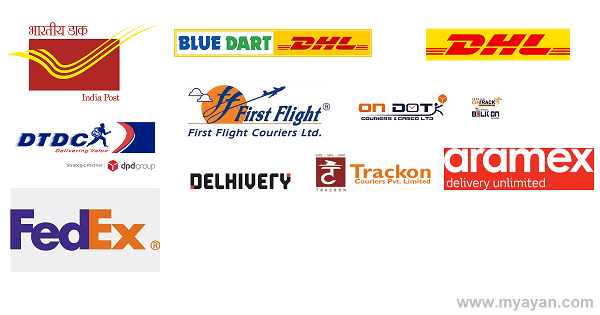 So here the list of top 10 courier or parcel services in India which have certified mail and delivery confirmation, daily operations and accounting methods, small packages and large deliveries and many more.

Indian post is a postal and courier services in India operated by the government of India. It was formed on 1 October 1854 that is 164 years ago. Currently, around four lakh employees work here. The Indian post provides services in delivering mails, money orders, life insurance, money-saving schemes, they also provide impressive interest rates who put their money in Indian Post money saving schemes. India Post has approximately one lakh fifty-five thousand post offices in India making it the worlds most largest postal network in India as well as the world.

Blue dart also is known as Blue Dart Express was formed in the year 1983 by Tushar Jani, Clyde Cooper, Khushroo Dubash. Bluedart is a private company that provide services in products delivery, express mail, logistics, freight forwarding and many more services. Bluedart mainly provide services all over the country and in South Asia.

DHL is an American courier and parcel services company based in San Francisco, CA. It was founded in the year 1969 that is fifty years ago by Adrian Dalsey, Larry Hillblom, Robert Lynn. DHL is one of the world's best logistic company. The company claims to deliver more than 1.3 billion parcels each year.

First Flight also know as First Flight couriers limited is known for providing several services to its customers like courier delivery, parcel, logistics services including warehousing, inventory management, supply chain, and distribution and also provides facilities like pickup request, e-mail tracking of products, SMS tracking of products. Some of the services which make First Flight different are pay on delivery, less courier charges, and gift cards and many more. First Flight was founded in the year 1986 and it is currently based in Mumbai, India and it also has sub-branches in Delhi and Kolkata also. First Flight provides very excellent services to its customers.

FedEx is an international brand which was founded in the year 1971 and was earlier known as Federal Express from 1973 to 2000 and now it is called FedEx in which Fed is taken from federal and ex is taken from express. The headquarter of FedEx is situated in Memphis, Tennessee as it is an American multinational courier service company. FedEx is famous for its one-night delivery and FedEx one of those companies which used live tracking system very early.

FedEx provides its services worldwide and to manage this large network and huge work and a large number of packages around four lakh and twenty-five employees work for FedEx. Customers are always happy with the services of FedEx.

Delhivery is a third party logistics service provider in India. It was founded in the year 2011 and its founders are Sahil Barua, Mohit Tandon, Suraj Saharan, Bhavesh Manglani, Kapil Bharati. Many big and famous ventures believed in the idea of delhivery and provided the fund to Delhivery during its initial stage. Currently, the company is based in Gurugram and it had thirty fulfillment centers, nineteen automated sorting centers, and twenty-five hundred delivery partners. Delhivery provides its services in over twelve hundred cities of India and to work properly in these twenty-five hundred cities more than twenty-four thousand employee work in Delhivery.

On dot, courier is a domestic and international courier service provider based in India. It was established in the year 1991 and its headquarter is based in Delhi. The company goal is to provide efficient and affordable courier services. On dot provides fast delivery and it delivers small parcels and also manages heavy shipments. On dot has four thousand booking centers and one hundred fifty branch offices.

Trackon couriers was established in the year 2002 and was known as Comcour Couriers. And in 2004 it came to know as Trackon couriers. Currently, it handel's one lakh and eighty thousand parcels in a day. It provides fast and accurate services to its customers.

Aramex is an international express courier delivery service provider and it is based in Dubai, United Arab Emirates. It was founded in the year 1982 by Bill Kingson and Fadi Gandhour. Aramex has currently 13,800 employees and it operates in 54 countries.

Which is the best international courier service in India?

Which is the cheapest international courier service in India?

The cheapest international courier service in India is DHL. They are quick, reliable, and affordable. On top of that, they offer minimum fees for worldwide shipping. The downfall of DHL is that they don’t allow you to print custom labels. Instead, they require all package recipients to come to pick up their packages at the post office. This can be inconvenient for your customers if your products sell in Australia, the UK, Canada, and more.

How can I ship internationally from India?

How much does international courier cost in India?

If you want to send something abroad from India, you need to determine how much it will cost. The minimum cost to send a parcel from India is INR 700/- while the maximum cost depending on the express or normal delivery can go up to INR 3000/-.