What are the Pros and Cons of NAFTA

The North American Free Trade Agreement (NAFTA) was an agreement signed in 1994 between the United States, Canada, and Mexico to reduce barriers to trade and investment. This agreement has profoundly impacted the three countries involved, from increased economic growth to job creation. As with any inter-governmental agreement, there are pros and cons associated with NAFTA. Let’s examine both sides of the issue, going through the pros and cons of NAFTA and its impact on the US, Canada, and Mexico.

The North American Free Trade Agreement (NAFTA) is an agreement between the United States, Canada, and Mexico that eliminates most tariffs and other trade barriers between the three countries. It was signed into law in 1994 and has significantly impacted international trade. NAFTA has been credited with increasing economic integration among its signatories and reducing the cost of goods for consumers in all three countries.

Under NAFTA, the U.S., Canada, and Mexico have agreed to eliminate tariffs on most goods traded between them. All remaining tariffs will be phased out over 15 years beginning in January 1994. This means that virtually all products imported from one country will not face additional taxes when entering another.

In addition to the tariff reductions and other trade-related provisions of NAFTA, several side agreements have been signed between the three countries. These side agreements cover border security, agriculture, air quality, government procurement practices, textiles and apparel manufacturing, wildlife conservation efforts, and labor rights.

Since its inception in 1994, NAFTA has profoundly impacted international trade in North America. It has helped increase economic integration among its signatories while reducing consumer prices in all three countries. It has also spurred foreign investment, job creation, and economic growth. However, NAFTA has also been criticized for exacerbating income inequality and encouraging companies to move production to countries with lower labor costs.

Despite its controversial legacy, NAFTA is likely to stay as all three countries have agreed to a new trade agreement—the United States-Mexico-Canada Agreement (USMCA)—which will replace it in 2020. The USMCA contains many of the same provisions as NAFTA but with a few important updates, including strengthened labor rights and environmental protections. By updating NAFTA’s outdated rules, the USMCA could help ensure that North America remains an attractive destination for global investors.

What are the Pros of NAFTA?

Not everyone would agree with the pros of NAFTA and the agreement's value. Here are some benefits of NAFTA for the United States, Canada, and Mexico.

One of the essential advantages of NAFTA is that it has significantly lowered consumer prices in all three countries. This is due to increased competition between companies and improved access to goods and services, resulting in lower costs.

NAFTA has increased employment in the United States, Mexico, and Canada. In the US, NAFTA has created an estimated 5 million jobs since its implementation in 1994. This increase is due to exports to Mexico and Canada, creating new job opportunities for American workers. Studies have shown that over half of these jobs are related to industries such as manufacturing, services, and agriculture. The same holds for Mexico and Canada as well, with both countries seeing a significant increase in employment from NAFTA’s passage.

3. Foreign Investment is one of the noteworthy pros of NAFTA

Trade Liberalization in Mexico has had far-reaching effects. Many of the country's laws have been updated to comply with NAFTA, leading to positive changes in the country's economy and infrastructure.

NAFTA has increased the protection of intellectual property rights for all three countries regarding patents, trademarks, and copyrights. It is considered one of the leading pros of NAFTA for businesses as it allows them to protect their products and ideas from being copied or stolen.

What are the Cons of NAFTA?

On the other hand, there are some drawbacks associated with the agreement. Here are some potential cons of NAFTA:

While the agreement has resulted in job growth in Mexico, it has had a less positive effect on the United States. Many American manufacturing jobs have been lost due to companies moving operations to Mexico where labor is cheaper.

The unequal distribution of resources between countries involved in NAFTA has led to inequality in terms of wages and opportunities. This has been particularly noticeable in Mexico, where wages remain much lower than those found in the United States or Canada.

The rapid expansion of trade across North America has harmed the environment, creating pollution in certain areas. In addition, NAFTA needs strong regulations regarding environmental protection, which can lead to further problems down the line.

4. Increased Dependence on US Corporations

Due to increased foreign investment from the United States, Mexico's economy has increasingly relied on American companies for jobs and economic growth. This could lead to a situation where Mexico is too dependent upon its northern neighbor for its own development. There are numerous other cons of NAFTA resulting from this dependency.

The reduction of tariffs and other restrictions on trade have led to decreased sovereignty for the three countries involved. This means that some decisions are taken from the hands of the governments of Canada, Mexico, and the United States and left up to corporate entities with different interests than all parties in mind.

In conclusion, NAFTA has positively and negatively affected its member countries. While it has helped create jobs and lower prices, it has also caused job losses in specific sectors and increased inequality between nations. Understanding both sides of this agreement is essential before coming to conclusions about its overall value. 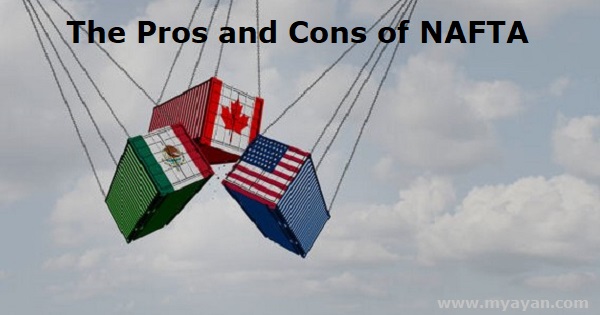 What are pros of NAFTA?

1) Increased trade and investment opportunities for all three countries.
2) Reduction in overall tariffs and removal of specific barriers to trade.
3) Greater competitiveness in global markets due to reduced costs.
4) Improved standards of living in all three countries through job growth, higher wages, and better working conditions.
5) Improved environmental protection measures for North America as a whole.

What are cons of NAFTA?

1) Displacement of jobs from Mexico to the U.S. and Canada due to lower labor costs.
2) Loss of specific industries in Mexico due to competition with larger, more well-established firms.
3) Increased illegal immigration as people seek higher wages and better working conditions in other countries.
4) Reduction of specific regulations which may affect safety and labor standards or lead to pollution or environmental degradation.
5) Potential worker wages decrease due to increase.

What are some potential solutions to the cons of NAFTA?

1) Comprehensive immigration reform that creates a path to citizenship for those already in the US and tighter border security measures.
2) Strengthening labor laws and regulations to ensure safe working conditions, fair wages, and other protections for workers.
3) More stringent environmental protection standards across all three countries.
4) Additional training programs to help those whose jobs were displaced by NAFTA find new employment opportunities.

What would happen if NAFTA were to be repealed?

Generally speaking, there could be an increase in tariffs between all three countries, making it more difficult for businesses to trade goods across borders. This could lead to higher consumer costs and decreased business investment opportunities. There may also be decreased job growth due to reduced access to foreign markets. Additionally, specific environmental protection measures that have been improved through NAFTA could be weakened or even removed.