Advantages and Disadvantages of Billboards 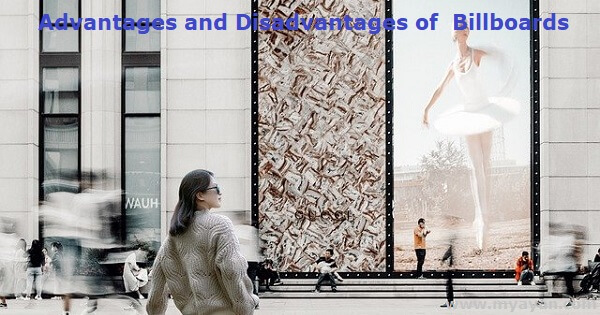 The movie Three Billboards Outside Ebbing, Missouri, is one of the greatest examples of how this advertising method can create social awareness. Billboards are one of the traditional ways to maximize your outreach in small towns. However, as with every type of advertising, you need to consider the advantages and disadvantages of Billboards while starting off the campaign. The pros and cons of this marketing type must come to your notice if you are about to invest in it.

Most companies have taken to digital marketing marking their presence of social media platforms to draw consumers’ attention. According to the Outdoor Advertising Association of America, there are currently approximately 368,263 billboards placed on highways across the United States. This fact speaks to why outdoor marketing still plays a pivotal role in remote towns.

What Are the Pros of Billboard Advertising?

If you have decided to build your brand image and attract customers locally and globally, you need to take as many approaches as possible. You can create more consumer awareness by introducing billboard ads and blending in social media and other marketing tools. Consider the following advantages of billboards to know why this advertising method is still effective.

Billboards are larger that attract people’s attention from about a mile or two distance. They are usually placed at heights along thoroughfares and highways. This makes them more likely to be noticed by the drivers and commuters. In addition, billboards generally target the audience from a particular region or state, acting as a reminder for everyone who crosses the route day in and day out.

Billboard ads are a direct way to communicate with the consumers as they use more intuitive graphics to display product content. As pictures are worth a thousand words, you don’t need to laden the ads with text-based content. Instead, you can make it visually appealing to customers.

3. Boost in Sales is one the key advantages of billboards

Strategic placement and the right visuals are the keys to covert the audience into prospective buyers. If a person crossing by sees the product interesting, they may instantly feel the need to buy it. For every customer, you have a chance to increase your sales.

4. Billboards can guide people with directions

Many motels, drive-throughs, stores, and restaurants use to direct the audience to their locations. The directions help customers reach the advertised place timely. Everyone wants to save time while on the road; if they have stopped to check for directions, they are potentially your lead.

5. Billboards target Customers who can purchase

Most people driving across states or cities are capable of looking into the product details and buy it. The best part is, most people who drive out to far-flung places are in a better fiscal position. Thus, it’s more likely they would buy your advertised product.

What Are the Disadvantages of Billboards?

Besides the benefits of this type of marketing, there are some limitations to consider. There may be more disadvantages of billboards in case the number of audiences is lower than expected. Apart from that, location and other factors may also cause problems.

Expenses are a major concern among advertisers as the billboards are up for a specific period. It’s usually beneficial for a company to place billboards at a location with a higher population. If there are limited audiences in the neighbourhood, the entire campaign would cost much more than you can earn. Apart from posting, billboards require regular maintenance and monitoring when placed in a location affected by hurricanes or floods.

Where cost and maintenance are into play, time also plays a pivotal role in billboard advertising. People generally drive at higher speeds on highways and are less likely to catch a glimpse of what’s advertised. They have less time to heed the advertisement, which adds to the disadvantages of Billboards. This advertising method has pitfalls compared to its digital counterpart, where you get paid per view or visit.

3. Billboard ads can cause distractions

Whether digital or traditional advertising types, Billboards have always been a debatable topic. Drivers do get distracted by many things while driving at full speed on the highways, resulting in traffic fatalities.

In a 2015 study by the University of Alabama, Birmingham, researchers found that many crash sites had billboards present, which could be a notable cause for mishaps.

Despite using an intuitive graphic, the lack of the right product description on billboard advertisements may be why the audience turns away from it. If your brand is well-known, the chances are you may get the right audience for your campaign. If it’s not, you may need to make some modifications as the information is insufficient.

Provided the location and placement of a billboard ad are the key factors, the same can be the downsides to your campaign. Billboards are placed at heights so people can view the ad from afar without blocking the scenic view behind it.

If it’s placed at an inadequate height, the chances of visibility reduce as the trucks coming from the other direction can block audiences’ view completely. Also, billboards placed at reachable heights are more prone to vandalism. Such drawbacks of billboards may add more maintenance costs for you.

Conclusion on Pros and Cons of Billboards

Billboard advertising has always been a sure and short method to promote products and convert sales. Creativity, clarity, target audience, and motive must be the main concerns of every advertiser before starting their campaigns. However, the limitations mentioned in the pros and cons of billboards must also be adhered to seriously to avoid overhead costs and keep the campaign going.

What is a disadvantage of billboard advertising?

The expense of billboard advertising is one of its disadvantages, as it entails a substantial expenditure from the time the sign is placed to the time it is removed. Other expenses include maintenance and repairs, in addition to signing a contract with the area's owner.

Why are billboards not effective?

What are the advantages of billboard?

Billboards are cost-effective, and they can be placed in high-traffic areas. In addition, billboards allow businesses to target their audience in a specific area, making it easier to gain additional clients. Further, billboards provide an opportunity for individuals who are driving past the billboard's location to become new consumers.

Are billboards good for the environment?

Unfortunately, vinyl billboards are highly polluting to the environment. They're created of PVC and involve hazardous chemicals that produce a lot of toxic waste.