These salt rock lights are ornamental items that people purchase for their homes, and the stones are carved from a pink rock salt mined from Pakistan's underground mines. Their most significant takeaway, though, is that they're supposed to provide a slew of health benefits to the human body.

However, little or no concrete evidence is available about their alleged health benefits. Since Halotherapy uses similar methods, Himalayan Salt lamps can be considered an excellent alternative to the former.

What are the Pros of Himalayan Salt Lamps?

For a study published in the Evidence-Based Medicine journal, researchers reviewed the effects of air ions in Himalayan Rock Salt. The researchers found that people exposed to salt lamp lights during their sleeping hours had an easier time falling asleep than those without the lights, and people also fell asleep faster and slept for more extended periods.

2. Stress Relief is one of the leading pros of Himalayan Salt Lamps

Being stressed out can cause many health problems — including changes in your immune system and weight gain. Another study conducted on animals found that negative ions in the air may improve serotonin levels.

However, the same benefits of Himalayan salt lamps are not yet linked to humans. One possible way you can create a calmer environment is by surrounding yourself with salt lamps in your home and office.

Himalayan salt has anti-inflammatory properties that can benefit people's health. Researchers found that after they injected rats with an inflammatory agent, exposing them to salt for four hours significantly reduced any redness or swelling caused by the agent.

4. Prevention of Dust and Allergens

Salt lamps can also purify the air by reducing allergens, cleaning smog from your environment, and generally reducing dust in your home. When you turn on a lamp with a salt crystal, negative ions are released into the air.

Negative ions attach themselves to dust or pollen particles before settling back down to the floor or furniture. This benefit is one of the.

If you suffer from allergies, salt lamps can help reduce airborne allergens in your home due to their ability to reduce dust by attracting it, making them ideal for those with asthma and other respiratory issues such as hay fever and bronchitis.

What are the Cons of Himalayan Salt Lamps?

All types of salt contain minute amounts of naturally occurring trace minerals, but because Himalayan pink rock salts come from salt mines, they may contain high levels of these trace minerals.

Some studies have found that Himalayan pink rock salts can contain arsenic and antimony, toxic heavy metals that can cause health problems if ingested in large amounts.

2. Salt lamps can be dangerous to pets

There have been reports of pets seriously injuring themselves by knocking over a tabletop lamp or eating the light bulb. If your pet ingests enough salt, it will become dehydrated and unable to produce urine. If not treated immediately, this condition will lead to kidney failure and death within 24 hours.

3. Possible skin irritation for some people

Some people may experience skin irritation when exposed to direct heat from the light because it exceeds 100 degrees Fahrenheit (38 degrees Celsius). If you have susceptible skin, it may also develop rashes. This problem is one of the rare cons of Himalayan Salt lamps. Considering your skin sensitivity first is a wise decision you can make before buying one.

4. Heating element can be fragile and dangerous to children

Although the bulbs are made from salt crystals, they're still fragile and can shatter if dropped or knocked over. This could lead to a sharp glass hazard for small children, as well as burn injuries for anyone who comes into direct contact with one of these lightbulbs when it's hot. When changing a bulb, make sure to wear thick gloves to avoid injury.

5. High price tag is one of dividing cons of Himalayan salt lamps

You may have to pay a pretty penny for your salt lamp, and a large, decorative Himalayan salt lamp can cost hundreds of dollars. If you are just looking for one to decorate your space, there are plenty of better alternatives out there to try at a lower cost.

Himalayan salt lamps are a popular home décor item that purifies the air, making it better for your health. The negative ions released by these lamps can help reduce inflammation in people with asthma or other respiratory issues.

They also have mood-boosting properties and may improve sleep quality when used at night before bedtime. If you're looking to buy one of these fantastic products, make sure you find out what size is best for your needs before hitting "order". 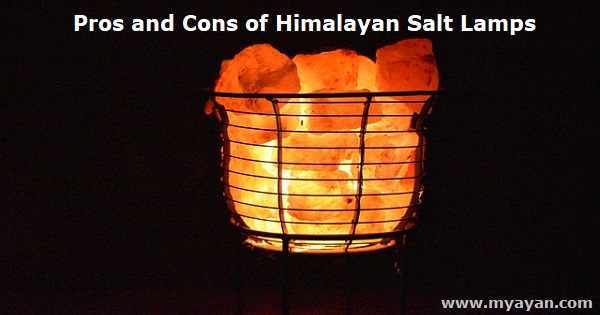 Is Himalayan salt lamp good for you?

There's no proof that Himalayan salt lamps improve health. While they may be beautiful and help create a relaxing atmosphere, there's nothing to suggest they do anything else. Additional study on the concepts behind their possible health advantages is required.

Those bulbs will eventually burn out, and you'll have to replace them, so keep in mind that if you ask yourself, can I leave my Himalayan salt lamp on all night? It's best not to do it. The typical life span of a salt lamp is 1000 hours, which equals roughly 42 days.

What are 5 benefits from using a Himalayan salt lamp?

They are aesthetically pleasing, decorative pieces. Salt lamps will emit negative ions when turned on, which could potentially have some health benefits. They may help with electromagnetic radiation produced by electronics. However, as suggested, it's unlikely that they would help improve cardiovascular or respiratory issues or depression.

Do salt lamps get smaller with use?