Advantages and Disadvantages of Microchips in Humans 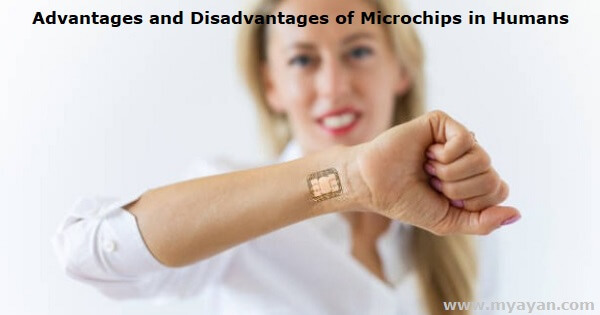 Microchipping Humans was considered unimagined years ago, but now it seems easy and beneficial for humans. With Swedish citizens receiving microchip implants in 2018, the medical and healthcare sectors have welcomed this idea for good. Now Microchips are a buzzword to make people’s lives easier day in and day out. The future, people will be able to use the technology in their homes, offices, gym, and even the marketplace. Now Microchips are about to revolutionize many patients’ lives as doctors can treat untreatable ailments. But can this technology be harmful? Many debates continue on the Advantages and Disadvantages of Microchips in Humans.

The concept of Microchipping Humans came to practicality years ago when a blind patient received an implant in 1978. Swedes were the next to have implants in their hands. Since then, the researchers have been digging out more studies on how the use of Microchip implants benefits humans.

NBC, and many other sources, has predicted that Americans may soon have chips implanted under the skin to identify each person with microchip implants. Some people see it as a big problem that they have to carry around wallets and purses. But instead of all your IDs, credit cards, bus pass, library card, and other pieces of information in these things, you can just get an RFID chip embedded under the skin.

What are the Advantages of Medical Microchips in Humans?

Many states have started passing legislation hinting that humans rely on this technological invention in the future. Some even speculate that computer chips may be commercialized to benefit the common people and enhance their capabilities. It's worth considering the advantages of Microchips in humans, given their potential.

With access to your complete health records stored in an electronic database, it is easier for the doctors to track your health and recommend suitable treatment. Patients with cancer or HIV/AIDS can get the right treatment from specialists even if they are thousands of miles away.

A single chip can also store information about allergies, so if you visit an allergist in New York, you'll have access to your full allergy history without having to answer the same questions over and over again.

The COVID pandemic has exposed many loopholes in the global medical care system. For example, people may get infected at the hospital for unrelated reasons passing on the infection through waiting rooms or bathrooms.

With chips implanted, everyone would be able to monitor themselves and identify any potential symptoms to isolate themselves before it spreads further. One of the potential benefits of microchipping humans will be that patients would be able to identify what they are suffering from and how to keep others safe from it.

Not just the healthcare sector, microchipping in humans will be a great tool for a variety of purposes. For example, this technology will likely be used for biometrics, where employees will be identified uniquely with the chip implants. In addition, from stolen or cloned credit cards to medical identity theft, microchip implants will be a preventive tool for citizens.

The chip implants will safeguard individual's health information, including SSN and their personal information. In addition, chips implanted at birth can help identify who is misusing the details and prevent mishaps.

4. Lower healthcare costs are notable advantages of Microchips in Humans

Employers are now responsible for covering many of their employees' medical bills, which is becoming more expensive each year. Nearly one-third of the US employers pass on some or all of those expenses to workers in the form of higher deductibles, copays, or coinsurance rates.

This trend will most likely end with implementing microchips as employees would be able to save much of the expenses on their health with the right treatment at the right time.

The revolution has already begun as blind patients can see, paralyzed patients can move their bodies, and mute patients can speak. Microchips used for brain implants would be the main deal-breaker in the healthcare sector, from prosthetics to treating autistic patients.

The advantages of medical microchips in humans will certainly help with several things, like finding it easier to find the closest hospital or finding out if someone is nearby who needs CPR. This would be especially helpful for people living alone and older adults experiencing memory loss, Alzheimer's disease, dementia, or other conditions that make them unresponsive to external stimuli.

What are the Disadvantages of Medical Microchips in Humans?

On the other hand, there are various disadvantages of microchips in humans. There are health risks as well as privacy concerns. Researchers still have control over patients' bodily privacy. Whether patients will be able to remove the implants is one of the striking questions. Furthermore, the risk of security of user's data raises a louder alarm for many.

Apart from the medical use, the concept of microchipping humans for daily activities seems shady. Companies manufacturing these microchips are the ones behind designing and programming these chips.

There has to be someone controlling how they operate and can manipulate the information of users. The vulnerability of misuse of data stored in the database is higher for people opting for microchip implantation.

Over time, new hardware and features may come to replace older ones for the device to remain up-to-date. However, it is possible that older hardware may not be replaced easily because it will require the necessary steps to do so.

Also, there may be complications for people going through replacement procedure as the process is painful and prone to technical glitches.

Medical treatments provided to humans are extremely beneficial in the area of human health. However, there are some disadvantages associated with them too. One of the most major ones is the cost of implantation for medical treatments.

The issue of microchipping humans brings up several ethical questions. For a person to be chipped, that person must want to be chipped and be capable of giving consent. If someone cannot give consent or refuses to get injected, what are the other forms of identification?

Microchips have been applied for years in cats and dogs as a way to identify them. One argument is that it would be like having your ID attached to your body at all times. However, some people argue, disagreeing with the idea of being "tied" a chip for life and want the choice of getting rid of the chip later on if they no longer want it.

5. Severe Microchip side effects in humans

The Microchip implantation process can be painful because it requires cutting open your skin with a needle or scalpel. Some people experience pain during this period. According to reports, there's an increased risk of infection and bleeding at the implantation site. The severe cases after implantation may arise in the form of septic shock and infection due to incorrect insertion of microchips.

Once inserted and placed, it can't be removed easily, even if you decide they're no longer necessary. Sometimes doctors have to remove them surgically when complications arise or infections risks are higher.

However, this is an invasive process that may require hospitalization and carries risks of its own. The data collected by these chips might also create problems with privacy rights.

Hackers can take control over your chip remotely by targeting it through public networks like WiFi which means information about your medical history could fall into unauthorized hands.

Analysis of Pros and cons of Microchipping humans

Human microchipping is one of the many technological advances that allow doctors to make medicine more accessible to patients worldwide. At this point, human microchipping is voluntary and mainly used for patients at risk of complications. A mass implementation would need to go through many debates on the individuals' health, technological, and privacy concerns. Nevertheless, limiting the use of Microchips to the healthcare sector seems to solve many unprecedented problems in the future.

What are the disadvantages of microchipping?

Concerns about personal privacy, security breaches, workers' compensation claims if the chips induce medical issues, and the need to accommodate medical and religious needs if they become required.

Why you should not get microchipped?

However, it's possible that these chips don't always stay in position. According to studies from 2007, microchips triggered cancer in one to ten percent of lab rodents injected with the chips.

Can microchips be used in humans?

A microchip implanted in a human is any device placed beneath the skin (subdermally). An example is an identifying integrated circuit RFID device encased in silicate glass inserted into a person's body.

Can microchips cause health problems?

The microchip companies claim that the chip is safe if installed correctly. Still, it has also reported problems, including cats and dogs suffering from weakness in all four limbs due to incorrect chip placement.

What are the benefits of implantable technology?

The best implant in your brain can boost your senses and help you be a better driver. A brain implant may also assist you to remember every word of any meeting or conference you attend. The future of brain implants has an infinite number of possibilities for people like humankind in the years ahead.