Advantages and Disadvantages of Windows 11

Successor to Windows 10, Windows 11 beta version was released by Microsoft on June 24, 2021. Windows 11 is set to hit the market by the end of the year. With more advanced and user-friendly features, the new Windows 11 is expected to catch more attention than its predecessor. However, it is still just hypothetical to say whether it will be more impressive or faster than Windows 10. The Advantages and Disadvantages of Windows 11 will be helpful to users to draw closer conclusions.

The all-new version of Windows OS is set to launch in the market in late November this year. This version will have lots of user-friendly features with easy navigation, search options, and a whole new collection of themes.

Windows 11 will be free to upgrade only on a genuine Windows 10 computer/laptop. This means that you need to have a genuine copy of Windows 10 on your computer to download Windows 11 for free. Watch Windows 11 Preview build here.

What are the advantages of Windows 11 Operating System?

This OS is considered the advanced replacement for Business, personal, and gaming use. It’s an upgrade of Windows 10 which means, Microsoft will certainly alleviate the limitations of Windows in this version. Here are some notable advantages of Windows 11 you need to matter.

1. Graphical changes are the major advantages of Windows 11

The themes set is all new and different in windows 11 including the start button and start-up sound. There will be a huge improvement in User Interface which surprisingly adapts to the user screen automatically.

Furthermore, a Floating login screen, Redesigned taskbar, Adaptive Cursor, Fresh icons & system tray, and customized Notification tray will be more of an attraction. The start button will sit in the centre of the taskbar which can’t be moved to the left or right on the desktop.

A multi-window task pane will be a boost to the advantages of Windows 11 to users as they will be able to switch between window panes easily. The multitasking feature of Windows 11 will make it easier for users to organize windows in different sizes.

Windows 11 will remember your chosen settings, so you can switch to custom view instantly and never have to realign the active windows.

Windows 10 received negative feedback because of its poor tablet mode; Windows 11 will bring more intuitive tablet mode. In addition, users will be able to interact with the screen through voice typing, touch screen, custom keyboard settings, and digital pen.

This new feature will only be compatible with convertible devices. The Operating system will also come integrated with Microsoft Store, Android Application Support, Amazon App store.

In windows 10, you had to use the "type here section" to search for a particular app or settings. On the other hand, the insta-search will enable users to see the result as they type their query, thus provides the result from which the best option can be selected.

Since the successor is said to be faster and more stable than the former version, your search will further speed up by a strong configuration, including faster system updates. For a better gaming experience of users, Xbox and Microsoft Teams have integrated, which adds to the advantages of Windows 11 users, whether home users or Pro.

What are the disadvantages of Windows 11?

There are possible downsides of Windows 11 for many users who have already found home to windows 10. Besides the system requirements, there are a few more things that users might feel missing in windows 11. Some of the common disadvantages of Windows 11 users may face are listed below.

1. Specific System requirements will be major disadvantages of Windows 11

With at least 4 GB and 64 GB hard disk space, it’s too hard to believe Windows 11 will be faster. Also, the computer must have a TPM security version of TPM 1.2 or higher and Secure Boot Capable support along with a processor that has two or more cores and a clock speed of 1GHz or higher to be compatible with Windows 11.

Given that the minimum system requirements are a must for Windows 11, PC or laptops with this configuration will cost more to users. The major issue will be the Graphics card (Compatible with DirectX 12 or later with WDDM 2.0 driver) which may cost further. Some users may find it hard to switch to an upgraded environment.

Even though Windows 11 promises to overcome some limitations of Windows 10, some users may take time to acclimate to the new features. Removal of Skype, Paint 3D in the latest version may add to the disadvantages of Windows 11.

Microsoft releases patches and system updates from time to time, but problems may arise for Windows 10 users later if Microsoft makes it mandatory to upgrade. The same happened when XP users had to migrate to Windows 7, Windows 7 users had to switch to Windows 10.

If a problem occurs in the operating system, the technical professionals need to troubleshoot it. As the new version of the Operating system brings advanced features, it may not be easy at the beginning for tech support to get to the root cause easily. Companies would have to invest in training their IT guys.

Training both the employees and tech support professionals may add to the disadvantages of Windows 11 for business. This is because they may have to ramp up the hardware and spend time training the employees.

Conclusion on Windows 11 Pros and Cons

There are mixed statements to make while deciding whether Windows 11 will meet the expectations of gamers and home users. Sure, without a hardware upgrade, it may not be possible for many to enjoy this version. You can understand more pros and cons of Windows 11 once you try it yourself. 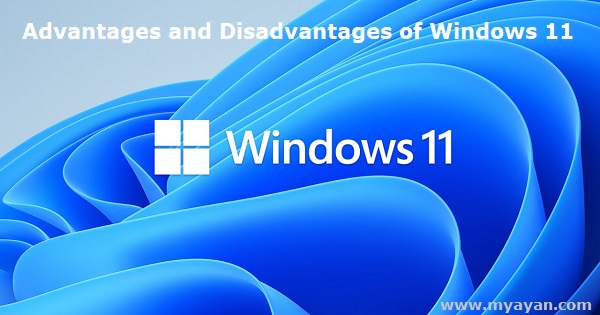 What are advantages of Windows 11?

Even though some modifications are somewhat polarizing, Windows 11 is still a secure design option. It's just a lot better than Windows 8 was. Microsoft attempted to create a contemporary operating system that wouldn't be unfamiliar to primarily mobile customers with Windows 8.

Windows 11 requires at least 16 GB of free space on your PC, but it can be installed on PCs with less. To install Windows 11, you'll need at least 2GB RAM and 20 GB of storage (8 GB for 32-bit editions). Additional storage space may be required to download updates and enable various options.

Is Windows 11 good for gaming?

While Windows 10 may not be any faster at games than Windows 11, neither is it slower. The RX 6900 XT was much more consistent in performance across the two versions of Windows; the average fps was within 0.3% overall, and the biggest changes were less than 2%.