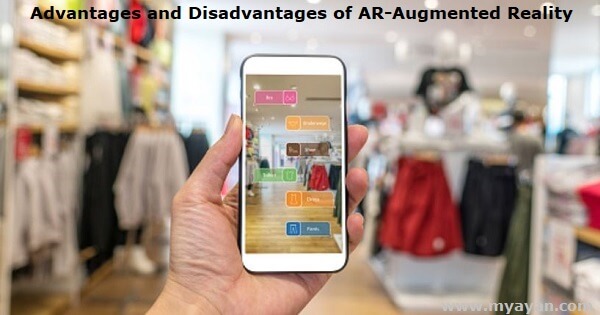 Augmented Reality or AR is a mixture of the real and digital worlds, making events easier to interact with. This technology is most useful in driving, sport, and other events. Primarily, AR technology allows people to build up a new world foundation by embracing both real and digital worlds. Pokemon Go and other AR-based games are an example of what this technology can do. But there are Advantages and Disadvantages of AR to consider, from productiveness to ill effects.

What is Augmented Reality in simple words?

Augmented reality (AR) is an enhanced version of what you see or experience in the real world. The environment created in Augmented Reality uses different Video, auditory, and sensory methods delivered by technology. AR is widely used in mobile computing, Businesses, the healthcare, aviation industry, and many other sectors.

Augmented reality is one of the most exciting new technologies to come on the scene in a long time. It is the next big thing to happen in the world of technology. There are many pros and cons of AR that need to be considered before implementing it for your business or personal use, which can be used for business or educational purposes. In this blog post, we will discuss the pros and cons of Augmented Reality and how it has been applied so far.

Applications such as Pokémon GO, launched in 2016, offer a combination of real and digital worlds is the best real-life example of AR. However, after the release of Pokémon GO, augmented reality (AR) technology experienced a decline among the masses. As a result, several companies developed apps that were largely composed of AR qualities.

What are the Advantages of AR?

Augmented Reality can help create an entirely new, interactive experience for users. Moreover, augmented reality offers a solution to the problem of being left out of the latest technological advances. The following advantages of AR make it a perfect tool for many sectors in the future.

One of the benefits of Augmented Reality is that it can provide an enhanced experience. This means users will be able to take their phones and hold them up in front of a certain area, such as a building or natural landmark. The app then overlays information on top of what they are seeing, providing more depth than could otherwise be seen by just looking at something without AR technology like this.

You can see buildings from different angles and determine where you are standing through enhanced maps and positioning. For example, when used for navigation purposes, perhaps one perspective shows pedestrians crossing while another looks down onto the street below with arrows showing which direction drivers should go next.

For mobile phone users, augmented reality is really easy to use. Just point your camera at an object, and the app will show you what it does with that particular item. So, for example, if you wanted to know how many calories are in a slice of pizza, all you would have to do is find an image of one on your screen and watch as the number pops up right next to it.

You can also look at something like furniture or clothing, so when you walk around your room or go shopping, you'll be able to see how well they fit into the space. It's easy for anyone who knows the way around their smartphone because all this information isn't just sitting there inside some clunky program; it's in fact, everywhere they look as far as the eye can see.

AR is speculated to transform every business from housing to the retail market as the customers would be able to get more of the benefits and invest accordingly. Augmented Reality helps you with construction projects. The technology allows workers to identify and fix damaged parts of a building, structure or facility.

AR can also be used in the designing and remodelling processes; for instance, it is often more cost-effective than physical prototyping. This means companies have fewer upfront costs when they are designing new products. They will know what the final product looks like before manufacturing begins.

The pros of augmented reality include its potential as an educational tool that can provide rich content. The data is based on accurate GPS coordinates and provides navigation and directions without relying on paper maps.

Furthermore, there is greater access among students, educators and researchers to knowledge. For example, teachers can interact with students in classrooms globally while simultaneously teaching a lesson on the other side of the world using AR-enabled tools like Google Expeditions (Currently closed) or Aurasma.

Augmented Reality is often used in the medical field for teaching methods and even surgery guidance. It has also been found that AR may help with learning disabilities such as dyslexia or ADHD by making it more fun and engaging than traditional methods can.

Augmented Reality can also make a person's job easier because they can have information on demand about their work at any time. This would enable them to alleviate the need of interrupting someone else for this type of request or wait until they get back into an office before checking out what was needed.

What are the Disadvantages of AR?

Augmented reality is not as natural and intuitive as it appears. It's a lot of work to create an AR experience that feels organic for the user, and there are many different ways in which your product can be used incorrectly by consumers. The limitations of augmented reality include the costs majorly. Some other disadvantages of AR are as follows.

Augmented reality is expensive to create, and some AR apps are too complex for the average user. The cost of an app can range from $0 up to around $100k; it all depends on how complicated you want your app or advertising campaign to be.

Not everyone has much capital to invest in augmented reality (AR) technology, so only certain large organizations have this advantage. Small scale companies would also be unable to afford this technology due to higher expenses.

Augmented Reality can cause privacy or security concerns. This is rooted in AR making it difficult to discern between what's real and what's not, thus leading to a fear of being "tricked" by an attack.

For example, people using social media may be more likely to believe in false information if they're convinced their friends posted about it on Facebook.

Augmented Reality is a technology that uses virtual overlay on the physical world. It can be used in games, entertainment, and many other ways. Augmented Reality has been around for decades, but it's only recently that they've had significant advances in technology to make them more mainstream, with smartphones and tablets providing AR experiences to consumers at an affordable price point.

4. Addiction and Fatalities are major disadvantages of AR

One of the cons of AR is that people share how addictive it can be to constantly check their phone for updates on the game or other apps. This addiction has been deemed as "smartphone fever" by psychologists and physicians.

Augmented reality can be a little challenging when it comes to real-life problems such as workplace accidents. For example, factory workers might lean over too far and end up injuring themselves due to vision being blocked by their glasses/contact lenses, such as leaning over while operating machinery at high speeds where there's no time to react.

As the limitations of augmented reality are still in discussions, studies say the technology has many unprecedented health risks. The wearer of AR devices would immerse themselves into Virtual content which could lead to hearing loss, damage to eyes, even induce some behavioral changes.

According to another study by Google daydream, users may tend to experience a virtual environment to be real leading to differences in how they perceive and process things. Such processes would lead to psychological problems like PTSD.

Conclusion on Pros and Cons of AR

The future of augmented reality is uncertain, but the pros and cons of AR take it further to help you understand its vast possibilities for business and risks for personal use. The rest depends on how the companies and governments accept the technological breakthrough.