Pros and Cons of Removing Adenoids

Adolescents, as well as adults, may have issues with adenoids. According to a study, about 130,000 adenoidectomies are done each year in the United States. A small percentage of people may need to have their adenoids removed through an incision in the neck (cervical adenoidectomy). Adenoids are removed for many reasons, including recurrent or chronic infections of the adenoids (adenoiditis), airway obstruction, causing difficulty breathing through the nose, enlargement of the adenoids, resulting in mouth breathing, etc. Like every procedure, there are several factors to consider. Here are the pros and cons of removing adenoids to keep in mind before you go for it.

What are the Pros of Removing Adenoids?

If you or your child has enlarged adenoids, there are several potential pros of removing adenoids. These include:

Enlarged adenoids can block the airway, making it difficult to breathe through the nose. This can lead to mouth breathing, snoring, and sleep apnea. Adenoid removal can help to improve airflow and reduce or eliminate these symptoms.

Adenoids are located close to the opening of the Eustachian tubes, which connect the middle ear to the throat. If the adenoids are enlarged, they can block the tubes and lead to fluid build-up in the middle ear, increasing the risk of infection. Ear infections are a common complication of enlarged adenoids, and adenoid removal can help to reduce the risk.

3. Improved sense of smell is one of the main pros of removing adenoids

Enlarged adenoids can block the airway and make it difficult to breathe through the nose. This can result in a loss of smell. Adenoid removal can help to improve airflow and restore the sense of smell.

Enlarged adenoids can cause snoring and sleep apnea, leading to poor sleep. Adenoid removal can help to improve these conditions and allow for better sleep.

In young children, enlarged adenoids can interfere with normal speech development. These pros of removing adenoids are considerable when it comes to speech improvement and eliminating the risk of speech delays.

The primary benefit of partial tonsillectomy is that it is less unpleasant for the child. Children who have had this procedure are in much less pain in the first two weeks after than those who have their entire tonsils removed, and they may resume eating sooner.

What are the cons of removing adenoids?

As said above, around 130,000 adenoid removals are done by surgeons in the US each year. The risk of complications is low in youngsters who have had adenoid removal surgery. However, the following are some of the possible cons of removing adenoids.

Adenoid removal can sometimes cause ear pain or bleeding. If your child experiences either of these complications, it should resolve on its own within a few days.

2. Infection is among the common cons of removing adenoids

There is also a small risk of infection after adenoidectomy surgery. Symptoms of an infection may include fever, sore throat, and trouble swallowing.

3. Damage to the Tonsils

Adenoidectomy surgery can damage the tonsils in very rare cases. This complication is more likely to occur in children who have their adenoids and tonsils removed simultaneously (tonsillectomy) .

Some children may experience short-term breathing difficulties after adenoidectomy surgery. This is usually due to swelling in the throat. Most children will recover from this complication within a few days. These cons of removing adenoids are initial and temporary. In rare cases, some children may experience long-term breathing problems. This is more likely to occur in children with underlying conditions such as allergies or asthma.

There are also risks associated with general anaesthesia used during adenoidectomy surgery. These risks are usually minor and temporary. However, serious complications can occur in very rare cases.

In some cases, the adenoids can grow back after an adenoidectomy. This is more likely to occur in children than adults. After being partially removed, the tonsils occasionally develop larger: Around 5 out of every 100 children have surgery again within a few years because their breathing difficulties return. If this happens, surgeons frequently advocate for the complete removal of the tonsils.

Conclusion of Pros and Cons of Removing Adenoids 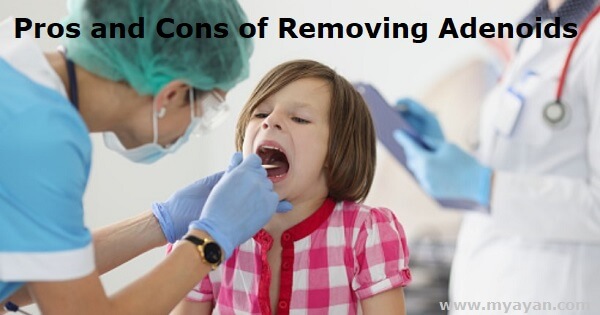 What are the disadvantages of removing adenoids?

Although the risks of adenoidectomy are minor, they include failure to correct underlying breathing difficulties, ear infections, or nasal drainage. Bleeding (extremely uncommon), Voice changes, and Pain are also possible. If your child has had a recent upper respiratory infection, there is a chance the adenoids will grow back quickly.

Is removing adenoids a good idea?

According to recent studies, adenoids and tonsils are being removed at a higher rate than previously believed. Adenoidectomy, like all surgery, involves a small risk of infection or other issues.

Does having your adenoids removed affect your immune system?

In children under the age of three, adenoidectomy with/without tonsillectomy may drop antibody levels. However, their immune systems were not harmed. These youngsters also do not have an increased risk of acute respiratory tract infection after the operation.

Does adenoid removal change your voice?

Adenoidectomy may have long-term detrimental consequences on speech, especially if the child has a small soft palate, a large nasopharynx (the part of the pharynx behind and above the soft palate), a submucous cleft palate, or if their soft palate does not function properly.