Advantages and Disadvantages of Immigration

Immigration solves the answer to how to find the right talent for your business. While it’s also beneficial for developed economies, grain drain also costs underdeveloped economies. Whether to seek work opportunities or to settle in a country as a permanent resident, there are many reasons why people migrate. The Advantages and Disadvantages of Immigration evaluate the different pros and cons of migrants to the economy, population, and nation as a whole.

What are the Advantages of Immigration?

Australia, Canada, the USA, Russia, and Western Europe are among the highest migration rates. Most migrants intend to settle in these nations looking for work or studies. Business companies and the national economy have the most advantages of immigration. Some of the reasons why it happens.

Skilled labor is the requirement of a flexible labor market. The greater the skills-base, the higher is the demand for a diversified skillset. Many business owners and entrepreneurs need temporary workers willing to do specific jobs lower than the locals. Such an opportunity is what immigrant workers seek to survive in a foreign land.

The job sector is competitive for talented candidates, yet there is a need for many companies, including small businesses, to find talent that fits their budget. This benefits not only the business owners but also the national economy.

Looking outside the national boundaries is what companies prefer to do to find the right talent for the job. This is why most companies in the USA do not hesitate to issue H1-B non-immigrant visas for recruits.

Since this is a non-immigrant visa, foreign workers have the legal rights to enter the United States. They can, later on, settle in the country after acclimating to the workforce. Both workers and companies get the advantages of immigration this way.

The main motive behind companies allocating tasks to skilled workers is to gain productivity. According to a study, migrants add to total employment and reduce the share of highly educated workers because of their larger share of low-skilled relative to native workers.

When immigrants contribute to creating stronger local economies, they also contribute to a stronger global economy. For example, more than 40% of the GDP of Guatemala comes through remittances provided by immigrants who have entered the United States.

Immigrants with more opportunities to pursue advanced education or high-skill employment can also take those skills back to their home nation and improve its status.

Most of the immigrants are highly educated, skilled, and well-trained. They are very inventive at generating new ideas. Being productive and innovative, they tend to make it possible to create new jobs, drive innovative thinkers, or make existing businesses more flexible.

Their presence makes it easier to establish worker specialization, making it easier for all businesses to invest more into their employees. Such creative ideas are attractive advantages of immigration.

What are the Disadvantages of Immigration?

Given the pros of immigration, there are some benefits to nations employing them. On the contrary, immigration can also be controversial. It’s the disadvantages of immigration that France has declared new laws on migrants from specific nations. Overcrowding, congestion, and extra pressure on public services are in heated debates as these are the outcomes of migrants. There are other concerns as well which are highlighted below.

Language issues can have severe consequences for migrants at times. The language barriers between migrant employees and managers or customers can be big trouble. Many of the migrants from Mexico, Guatemala, and El Salvador primarily speak an indigenous language.

Business owners must find ways to address this problem as immigrants make their way to America from diverse cultures with limited English proficiency (LEP) .

2. Legal Issues are common disadvantages of Immigration for many

Hiring an immigrant may have legal issues that the small-business owner might have to deal with. Legal formalities are the priority for the migrants as they need to fill Form I-9, Employment Eligibility Verification instead of a Form W-9 when completing payroll paperwork.

Immigrants neither have SSN; they have Tax Identification Numbers recorded on Form I-9. If an employee needs an H1-B visa, there are fees for applying and maintaining the visa.

The wealthiest and most developed countries are the favorite destinations for migrants. This means such countries tend to experience a rise in the population. But, on the contrary, under-population issues can begin to form in the developing world.

When population levels is disturbed, it can cause a lack of resource access at the local level in regions where high levels of immigration occur. There may also be a lack of jobs for native residents if they are not sharply skilled as migrants which is among concerning disadvantages of immigration.

No one knows what migrants are carrying with them; for example, the smallpox epidemic in 1775–1782 in the North American regions is so far the highly documented incident. The epidemic is reported to have killed nearly 11,000 Native Americans in the Western area of Washington.

Moreover, not only migrants but disease-causing agents can also transfer across borders with immigrants, harming the local population that generally remains unexposed to certain conditions.

Brain Drain has always been a big concern and one of the leading disadvantages of Immigration for developing nations. When a developing country sees its highly skilled ones migrate for better job opportunities, they lose an opportunity to develop.

The in-house talents, especially to an underdeveloped nation, help it to become stronger. Immigration takes that strength away from struggling nations. As a result, immigrants may get improved life for themselves or their families, though it can be a major immigration disadvantage for their home nation.

Conclusion on Pros and Cons of Immigration 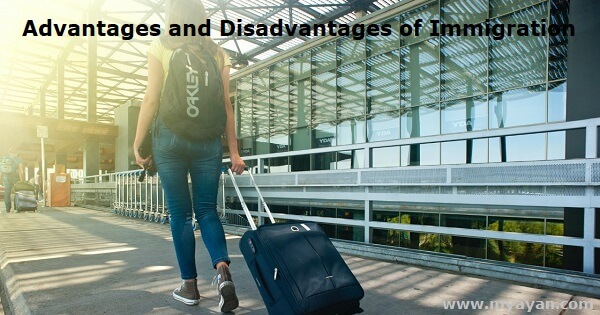 What are the advantages of immigrants?

The advantages of immigration have been identified by a recent letter from almost 1,500 economists, stating that it will increase the number of entrepreneurs; bring young people who help relieve the retirement of baby boomers, and enhance labor flexibility and productivity.

What are the positive effects of immigration?

By providing labor, purchasing goods, and paying taxes, immigrants contribute to the economy's growth. Increased employment leads to increased productivity. Immigrants will also help maintain the social safety net as an increasing number of Americans retire in the future years.

What are the main reasons of immigration?

Immigration is often a result of personal, social, or political circumstances in the countries people emigrate. Economic factors include higher salaries, improved employment prospects, a better standard of living, and educational opportunities. Political reasons for leaving one's homeland include oppression by an autocratic government or religious discrimination.

How does immigration affect population growth?

Immigrants contribute to population growth because of their own numbers and their above-average fertility. In addition, most of those who immigrate are working-age adults, so immigrants are more likely than U.S.-born residents to be in their child-bearing years.

What are the causes and effects of immigration?

Causes: Immigrants from Europe came to America in search of religious tolerance. Effect: Many different churches were constructed for different religions, and cities were divided based on religion/customs. California had the Gold Rush as a result of this.