Advantages and Disadvantages of Living in Utah 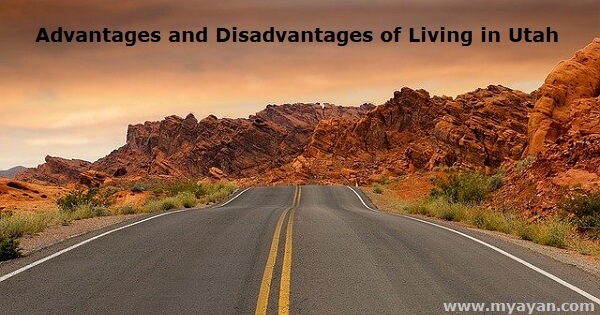 It’s the numerous benefits of Utah Living that the state’s population has grown so quickly. Utah is not the 4th highest population density in the USA. As estimated, the state’s population will remarkably exceed 6.8 million people by 2060. People settling in Utah often mention low housing costs, beautiful landscapes, and low crime rate are the reasons behind Utah gaining much attraction. If you are planning to stay in the state, you might as well know the Advantages and Disadvantages of Living in Utah first.

What are the advantages of living in Utah?

You can enjoy living in Utah in different ways, urban environment of the salt-lake city, landscapes, and get basic amenities to lie you do in a metro city. Here are some notable advantages of Utah Living to enjoy.

Compared to Montana, Vermont, and Oregon, the cost of living in Utah is relatively low. Therefore, you can easily find space to settle in and continue your life as usual. Moab is not just surrounded by natural beauty. It’s also a major tourist attraction. Since the city receives support from the tourism and hospitality industries, you can find your own rental space or house nearby by Moab.

Rural areas are even more affordable as you can fix yourself the extensive size of land at lower rates and spend on groceries and essentials efficiently. You can also choose to live in proximal cities with low real estate and easy grocery costs.

2. Utah Climate is suitable for every season

Utah takes a commendable spot on the states worth moving to, with a dry, continental climate supporting all four seasons throughout the year. Locals do enjoy the warmth of the summer and mild winters. The temperature is suitable for everyone as it rarely dips or spikes to the extreme.

Mountains guard the inhabitant against the storing cold gusts of winters. The same happens in the case of summer heat waves. The only problem you may have to face is during snowfall as it hinders the routes through the mountainous passage.

3. Low crime rate is one of the advantages of living in Utah

Utah is one of the safest states and is often rated among the top ten safest places to live in the US. With a mix of diverse cultures, people believe more in their cultural values. Salt Lake City has the highest crime rate and largely contributes to the average crime rate in the entire state.

Most criminal activities are related to property, while violent crimes are 36% lower than the average around the USA. One of the major factors to keep crime rates is the religious background.

Utah is also home to many national and international students who come to the state for higher education. The state proudly relies on its education system and has some renowned institutions.

Salt Lake Community College is the second-best place to complete higher studies, accompanied by Westminster University ranking 22nd nationally, Brigham Young University, and the University of Utah (both are among nation’s top 50 institutions).

One of the reasonable advantages of living in Utah is its thriving and stabilized economy. The state recorded 70% growth in tech jobs, with the unemployment rate as low as 3%. The rate is even less in some parts of the state.

You also have plenty of opportunities in micro business or startup businesses. The economy of any state thrives because of the balance maintained by giving job opportunities and adding an innovative approach to the business model. Utah is the state that offers both to companies and job seekers.

What are the Disadvantages of Living in Utah?

Utah is a religious state, and this reason is enough for someone to direct their attention away from the state unless they have strong reasons to move here. However, along come some other considerable disadvantages of Living in Utah.

1. You may be struck by boredom

Utah is so vast in terms of landscape and mountain ranges. If you are a summer person, mind staying away from the hot desert. And if you can’t help it, make sure you live in a group because no sight of humans can also trigger feelings of loneliness.

It’s usual to feel lonely with not much to do, even during winter. It’s way too cold out for kids teenagers to find amusement outdoors. But, if you are a photographer, you sure can use your imagination and take spectacular shots for your calendar.

Even though the average cost of Home in Utah is relatively lower than in other states, the rates have spiked for the few years in the area. The average price of a home in Utah is above $302,000. The rates go higher if you go forth to the suburban communities around the SLC, which can be up to $400,000.

You may face more problems as homes in Salt Lake City alone are 90% more expensive than the other areas across Utah. However, you sure can find a home within your range; you just need a little legwork.

From religious ceremonies to funerals, the Mormon community has a different way to perform every occasion, which may not fit into the senses of many. According to the stats, around 60% of the population identifies as Mormons. If you can respect the religious differences, you can find Utah an adjustable place.

At times, you can encounter situations where you have to comply with their specific religious beliefs. You need to be ready to cope with the religious differences or search for a liveable place elsewhere.

It’s hard to accept that Utah will ever be a tax-friendly state. As a local has to pay several types of tax, including Sales, Income, Property, Gas, Booze, and Fag, what seems too little adds to too much on your bank statement.

Utah is the 25th highest state in the US for its rate of taxation. You have to pay 5% tax on income, up to 9% sales tax, and 0.66% tax on property. So if you are moving to the state having a business plan, get ready to pay further taxes.

5. Driving is a big issue in Utah

There are not many speed bumps in the state that puts the drivers in a state of confidence. It’s usual to see someone driving faster than 100 miles an hour in the desert areas and open spaces. Being new to the state, you need to stay put of the local drivers as they can be easily spotted driving faster than you.

Final comments on the Pros and Cons of Living in Utah

Besides considering the Pros and Cons of Living in Utah, remember a couple of things more, the state has a liquor definition of 3.2%, and you can buy booze from a store before 1 AM the closing time. So you can stockpile it if you want. Second, make sure there is a tax on alcohol as well. Finally, have financial backup to deal with taxation and the price of a home if you are moving here permanently.