Advantages and Disadvantages of Rock Salt

Salt is an essential part of every cuisine everywhere. Salt is also the only ingredient you can find in every house around the world. If you haven’t been able to find out what are the benefits of rock salt or common salt, this informative topic is just to help you know all. Facts provided here cover the advantages and disadvantages of Rock salt and its alternative Table salt. Salt has many benefits and medicinal purposes besides just making our meals delicious. Salt fights obesity, and controls blood pressure, and inflammation.

Nomenclature and classification of salt:

Despite being comparatively low on Iodine, Himalayan salt has counts of beneficial properties that make it suitable for consumption. From hair to fingers, the benefits of sendha namak are apparent and clear. Its risk is also noticeable when consumed in large quantities. What are these? Let’s have a look.

What are the Advantages of Rock Salt?

No chemicals are used during the extraction and processing of Rock Salt, which makes it a safer option for consumption. It also boosts the digestive mechanism and is a natural medicine for those who have appetite loss.

Detoxification and cleansing are two known benefits of rock salt. During winter, dead skin cells accumulate on our skin, which also takes away the necessary moisture. Himalayan Salt exfoliates these cells and protects the layers of our skin hence, retaining the glow and youthful skin. The layers of skin are rejuvenated by massaging with rock salt regularly. The nutrients and minerals reach the skin cells affecting the cells directly and enhance blood circulation.

Rock Salt is the key element for maintaining hair and scalp health. Cleaning your scalp with rock salt removes the dead skin cells trapped in your scalp and drains the impurities by strengthening the hair to retain healthy oils. You can also mix rock salt with any home-based formula or shampoo to reap its benefits. Rock salt is also a natural hair conditioner that can prevent your hair from falling and breaking.

Rock salt contains traces of several natural minerals, which are known to boost the body’s metabolism and immunity. It also has more cooling properties along with Potassium, which helps maintain electrolytic balance in the body and reduces fluctuation in blood pressure.

Jaundice disease turns your body yellow which results in deadly yellow fever. Eyes and nails turned yellow and may worsen if not treated on time. Rock Salt is a natural agent that brings back the Nail’s shine and vitality. A gentle massage of rock salt will bring back vitality to your nails removing the yellowness.

People with sinus, migraine and other respiratory ailments can obtain benefits from using Rock Salt. If you happen to have tonsilitis, dry cough, or throat inflammation, gargling regularly with Himalayan salt is the most comfortable and most affordable solution for these problems. Inhale steamed rock salt dissolved in water in case you are suffering from Bronchitis and asthma.

6. Rock Salt is a Stress, Buster

Stress and anxiety are the most dangerous and difficult diseases that can trigger anytime due to any of the reasons. According to researchers, Himalayan Salt is an excellent remedy for anxiety and depression, as it relaxes the mind and restores the body metabolism. You can counter the stress and depressive mood by consuming Rock Salt with lukewarm water every day. Or to give a relaxation method more time, spend some time in a Jacuzzi filled with water containing rock salt.

What are the Disadvantages of Rock Salt

Since rock salt occurs in open lands and regions, it is susceptible to get polluted by harmful toxins. There are more dangers of rock salt instead of benefits. Now let’s head to the dark side and learn what the negative effects of rock salt on your health are.

Himalayan Salt deposits are found in open regions and mountain ranges. These areas are most affected by different forms of pollution. Different types of hazardous gases are released through industrial and automobile waste. This waste in the form of gases and particles gets deposited onto the rocks and salt plains. When the salt is extracted from such areas, it is unsure how much impurities are present in the salt and at what proportion. Another downside of rock salt is you never know if it’s in a safer or purer form.

2. Overuse can lead to Fatalities

Rock salt should be consumed in a limited quantity, which is not to exceed 6 grams per day. Rock salt is also rich in Sodium, and too much of it can be dangerous to our health. If you have high blood pressure, you should avoid taking rock salt as it can be dangerous, just like regular salt. To assure its safer use, you can add rock salt with other spices tastewise.

2. Rock Salt is unsafe for Pets

One of the common risks of Rock Salt is ingestion by pets. Pets tend to lick their paws and keep themselves clean. Upon stepping on the rock salt, they lick their paws more often without any limits; hence, ingesting the compound. Ingestion of rock salts leads to disorders like diarrhea, fatigue, drooling and disorientation, vomiting, and seizures. Too much intake of salt may also cause gastro-intestinal to burn. Salt poisoning that is common among pets due to the ingestion of rock salt is also known as Sodium Toxicosis.

Imagine walking on a surface laden with rock salt bare feet. The same damage would occur to you, which happens to animals and pets. While walking through the surfaces of rock salt, crystals may get attached to the pet's paws resulting in irritation and burning. This may result in soreness and infection later. Himalayan salt can also get collected on animals' fur; it is most likely to harm the paws.

Products that are based on rock salt generally leave behind a salt residue after melting the ice. The salt built up may damage the asphalt, pavements, and other surfaces permanently. It is also advised not to use rock salt on the plants' surface or near any vegetation. The salt turns acidic when reacted with moisture and may scorch the plants. If discharged into water, rock salt may also damage marine life.

According to a study by the University of Hawaii, besides damaging natural life, Sodium chloride can also cause corrosive damage to motor vehicles, recreational vehicles, and metallic surfaces. It can also lead to severe diseases like hypertension and cancer. 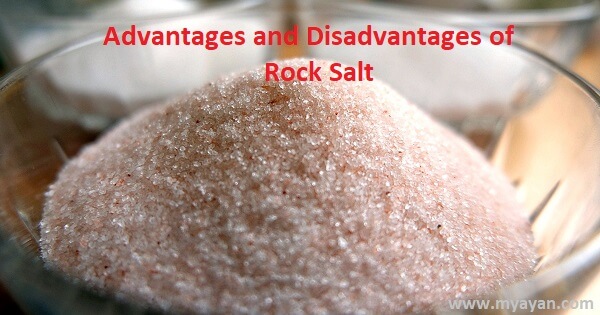 Is rock salt good for health?

Can we eat rock salt every day?

Rock salt helps in better digestion, absorption of minerals by the body, and correct metabolism. Rock Salt even helps to maintain the pH level in the body. Consuming rock salt every day helps in the proper blood circulation in the body and also rids the toxic substances from the body.

Which salt is the healthiest?

The healthiest forms salt are the ones that are least processed and have a natural form with no added preservatives. Pink Himalayan is found in a natural form salt and is considered a better variant of salt than regular white salt.

Does pink Himalayan salt have iodine?

Iodine may not be found in the Pink Himalayan Salt in higher quantity, but it is naturally present in the Himalayan salt to some extent. Iodine is required to support healthy thyroid glands. Therefore, iodine-deficient people might need to find iodine elsewhere if they are consuming pink salt already.