Pros and Cons of Unionization 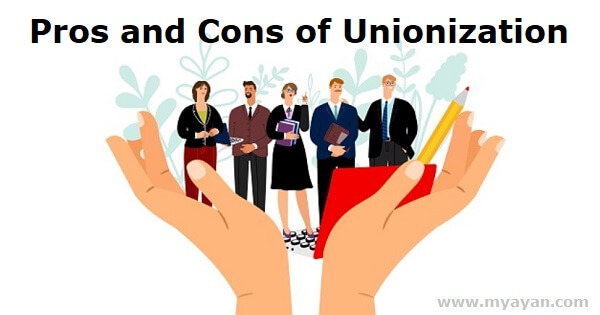 Unions are more contentious in the United States than in other countries. In the United States, certain people extol unions as a necessary component of a powerful working class, while others condemn them for putting too many barriers on employees and workers. To help you reach a concrete conclusion, there are a few pros and cons of unionization this guide will highlight. But first, let's get down to what unionization means in the corporate world.

What does unionization mean?

In business, unionization is the process by which employees organize themselves into a formal group to have more clout with their employers. The goal of unionization is usually to negotiate better wages, hours, and benefits for the workers. In addition, unionized workers typically pay dues to the union, which uses that money to finance its operations and support its activities.

The most up-to-date information on union membership is from 2017, which was released by the U.S. Department of Labor's Bureau of Labor Statistics in January 2018. According to the BLS, 14.8 million salary-based employees are members of unions. That's up by 262,000 people from 2016. In 1983, when comparable union data were available for the first time, the union membership rate was 20.1 percent, and 17.7 million workers belonged to unions (according to the BLS).

There are pros and cons with unions for employees and employers when it comes to workplace unionization. Let's take a look at some of them.

What are the Pros of Unionization?

With forming unions, come many different benefits for employees in different ways. The following are some of the pros of unionization you must look at first.

In addition to better wages, unions tend to negotiate better benefits for their members. This can include things like healthcare, pension plans, and paid vacations. In addition, by banding together, workers can get better benefits from their employers.

3. More Job Security is one of the main pros of Unionization

5. More Voice in the Workplace

What are the Cons of Unionization?

It’s hard to calculate the exact impact but there are several cons of unionization for both the employees and employers.

One of the downsides of unionization is that it can lead to less employee flexibility. Delegates have the power to negotiate rigid contracts with employers that stipulate work hours, vacation days, and job duties. As a result, employees who are part of a union may have less freedom and flexibility regarding their jobs.

Unionization is the common cause behind lower wages for new employees. Unions typically negotiate higher wages for existing employees, creating a wage gap between new and old employees. As a result, new employees may be paid less than their older counterparts.

It can also lead to less employee motivation. This is because unions often take an adversarial stance towards employers, leading to an “us-versus-them” mentality among workers. This can make it harder for employees to be motivated to do their best work.

Forming a union can limit employment opportunities as it often restrict the types of jobs that workers can do. For example, unions may only allow workers to apply for certain positions or only allow workers with certain skills to work in certain departments. Again, this can limit employees' opportunities to advance in their careers which is among considerable cons of unionization.

In conclusion, while unionization can benefit employees, it also has some drawbacks. Employees should carefully weigh the pros and cons of unionization before deciding whether or not to join a union.

What are 3 advantages to belonging to a union?

Employees can work together to get a better deal on pay, benefits, workplace safety and health, training opportunities, and other work-related concerns through their union. Unions also play an essential part in ensuring that management acts fairly and treats its employees respectfully.

What are the benefits of unions?

Unions negotiate and enforce contracts with management to secure what they care about, such as decent raises, accessible health care, job security, and a regular schedule without the worry of being penalized or retaliated against.

Why should I not join a union?

You lose the right to negotiate your wage or benefits if you are a trade union member. In certain situations, what the bargaining unit negotiates as a whole may not be in your best interests. As a union member, you're not permitted to make your own decisions about whether or not to go on strike.

Unions advocate for the rights of employees and may aid in advancing higher pay and benefits. However, businesses frequently fight unions since they might jeopardize their freedom or have an economic impact on them.