Advantages and Disadvantages of a Truss Bridge 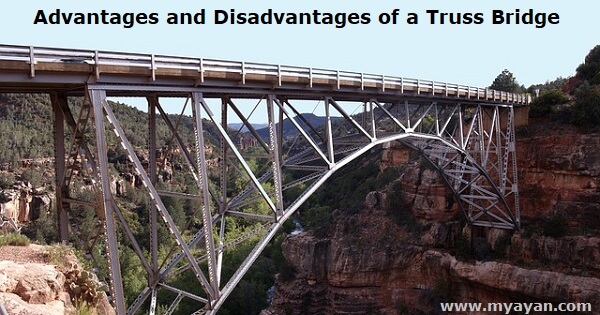 Many iconic Truss Bridges in the US have a historical significance but have also have redefined engineering. The Newark bay bridge or Freemont Mill Bridge; the world knows the cities because of these engineering marvels. More than 600000 bridges across the United States connect the cities while being the center of attraction for millions. Out of those, around 17000 are truss bridges. Best known for enduring loads and heavy traffic, the Truss Bridges also withstand extreme weather conditions. However, there are certain limitations of Truss bridges consider. The Advantages and Disadvantages of a Truss Bridge explain the arguable sides of this structure.

A truss bridge is a type of bridge that utilizes the principle that tension and compression are equally distributed along parallel beams. This means that they are powerful as long as the load on both sides of each beam is balanced or nearly equal. Truss bridges can be built with steel, timber, concrete, or other materials.

The Pros and cons of truss bridge bring out some details so you can make an informed decision about whether they would be suitable for your project.

What are the Advantages of a Truss Bridge?

Truss bridges are famous because they are lightweight but can be reinforced to make them strong. The triangular design of the bridge helps to support each other and makes for an efficient design. Truss bridges are traditional in design and date back to the early 19th century times. They come with economic construction, as they use materials efficiently. Further advantages of a truss bridge are listed below.

Truss bridges allow for a greater variety of designs than other bridge types. For instance, trusses can span long distances and shorter spans that require wide clearance underneath. In addition, they can be configured as nearly any type of bridge structure, including suspension bridges, arch-types, or beam types. This versatility offers advantages of a truss bridge over other traditional bridge designs because it is easy to customize based on each situation's needs.

2. Cost is one of the major advantages of Truss Bridges to consider

Truss bridges are cheaper to build than other structures because they don't require a lot of material. Trusses use less steel, typically more expensive per tonne or cubic meter than concrete and wood. The lack of vertical supports in the truss design means that they require less material such as concrete or iron rods and are cheaper to build, making them good examples of an economical and efficient engineering solution.

Truss bridges use fewer materials which can have advantages such as reducing waste from construction or creating more space for traffic below. They also produce lower noise levels because their cross members help absorb sound waves generated by vehicles traveling over the bridge deck. Some locations prefer this type of structure to reduce ambient noise pollution related to vehicular traffic.

The main advantage of a truss bridge is that it can span much greater distances than other bridge types without the need for lengthy and expensive approaches. They can also be built in places where it's impossible or practical to construct a more traditional, solid structure, such as deep valleys and steep slopes.

5. The road is placed on the Top of the Span

Truss bridges are designed to have the bridge deck placed on top of the truss. The road is typically supported by a suspended system built off-site and then lifted into place, which makes it easy to build near rivers or other obstructions without demolishing any existing structures.

What are the Disadvantages of a Truss Bridge?

The number of truss bridges on the world’s roads is growing rapidly. According to a study by Construction Weekly, while just 20 percent of all bridge structures worldwide are made from steel or reinforced concrete, this percentage increases to 54% in China and 53% in India. Truss bridge benefits when it comes to cost-effectiveness but also comes with some limitations. These disadvantages of a truss bridge need consideration before it can be constructed in an area.

Unquestionably, the materials needed to construct bridges aren't expensive. For example, trucks just hauling steel beams and concrete can cost up to $1000 in fuel, not counting any labor expenses for construction workers or equipment operators on site. In addition, a team of experienced civil engineers, welders, and crane operators are required to build these metallic structures.

This means that if a truss bridge is an option, it will most likely be more affordable than other options like box girder bridges because of their lower material costs and fewer steps required during construction due to its design which simplifies the process by eliminating some welding work (which could add another expense).

Painting and maintenance can be the most expensive disadvantage of a truss bridge. Truss bridges are more vulnerable to corrosion; they require much more maintenance than box girder and beam bridges because steel is a weighty material that needs to be replaced regularly to weaken over time due to wear and tear.

When repairs need to be done, or replacement work happens, it usually requires shutting down traffic which means these types of projects often take longer and cost significantly more money than other solutions like building new roads above where the old ones were (a process called decking).

3. Requires Lot of Height – No Chance for Low Bridges

Truss bridges cannot be built in locations that require less than 35 feet (11 meters) height because the trusses would have to be too long for them not to touch the ground during construction with this leaves little room for any other infrastructure on-site like roads or buildings.

One potential solution is building a temporary structure around the area where the bridge is being constructed so it doesn't interfere with anything else. At the same time, it's being put together, but this process costs significantly more money and time than it would build a box girder bridge.

4. No Ability for Differing Widths Between the Support Struts

The trusses of this type of bridge are typically made from steel, which is not very malleable in its shape without being cut or bent. Therefore, they must be welded together precisely with little room for any improvisation on-site.

This means that if two lanes were going across one end of the bridge, both lanes would have to fit into each truss rather than having some space between them because otherwise, they would interfere with one another at their joint points.

5. Heavy Weight is one of the biggest disadvantages of a Truss bridge

The steel used for truss bridges weighs a lot, which means they can only be built in areas where the ground has enough natural strength to support its weight. Unfortunately, this limitation also comes with the economic disadvantages of truss bridges.

It limits possible locations when trying to avoid expensive and time-consuming methods like building temporary structures around the bridge site or widening roads, so there's more room on either side of them while construction happens.

Conclusion on the Pros and Cons of a Truss Bridge

Truss bridges are a significant economic and cost-effective solution for locations needing a bridge but limited space. They can be built in areas with enough natural ground strength to support their weight which means they don't have the same limitations of beam or box girder bridges, like height requirements or width restrictions between the joints. But because these types of bridges require steel material, it does come with some considerable limitations when it comes to high maintenance costs and heavyweight. That’s why heeding to the pros and cons of a truss bridge is helpful before planning its construction.