Twitter is a unique social networking platform that’s been used for business and personal purposes. It’s a perfect tool to connect to friends, relatives, and even customers. With over 300 million active users, the American microblogging website Twitter has been under heated debates recently. The Advantages and Disadvantages of Twitter for students and businesses inspect its pros and cons.

People have drawn their focus to Social Media, especially during the lockdown. Microblogging sites like Twitter are a great place for marketing for startup businesses. Not just for business, it’s also beneficial for users willing to learn from their peers. Here are some of the advantage of Twitter for students and businesses.

1. Ease of use is one of the common advantages of Twitter for everyone

It’s easy-peasy to set up your Twitter account. Once you are set, you can start posting tweets online for the world to see. Just like every other social networking platform, there are other customization options available on Twitter. To get a better response, you’ll have to follow people and let others follow you back.

Twitter had set the tweet limit to 140 characters until 2017, which seemed too short for many users. But now, you can put your tweet worth 280 characters. If you are a person who likes to say much in fewer words, this is the right place to be and let your words do the talking. Getting it straight and let it be understood is one of the key advantages of Twitter, and that’s why many users have liked it.

It would be an understatement to say Twitter is just made for businesses and personal use. It’s a great place to network with like-minded people and meet your potential partners. Sharing your latest eLearning material and latest achievements, connecting with experts and fetching their opinion is what you can do to enhance your learning process.

4. You can Place your Ads

Twitter has a thing for everyone, from business owners to learners. This social media platform lets a business promote its brand in different forms, and promoted tweet is one of such. You can use promoted tweets to push on to the timelines of the target audience instantly. It’s an easy way to introduce them to your brand.

If you are a future planner, you can try Scheduling Tweets to post the content in the future. You can schedule both organic and promoted-only Tweets for future delivery and as needed.

Any product that is planned to be launched later can be scheduled in advance. If you are away for a month or a week, you can maintain continuity by scheduling the posts in advance and engage your audience.

Twitter is indeed an all-around tool to voice your concerns or to promote your business. However, the recent controversies have created a loophole in how the terms & conditions may affect user’s right to freedom of speech and the targeted groups. In addition, different other issues bring the disadvantages of Twitter to light.

Everyone has a right to freedom of speech, but unfortunately, some users leverage this right far too much being offensive. When you are on social media, it’s too easy for anyone to approach and troll you.

Apart from miscreants, fake accounts and bots are a bit of a concern as the real culprit can’t be traced if things beyond normal. According to the reports, there are as many as 20 million fake Twitter accounts through which most of the offensive content is posted.

Not everyone is a frugal speaker; they need more words to express their concerns or thoughts about a particular incident or event. 280 words are still not enough to cover much of what many users intend to say. Either a user has to split lengthy posts into multiple tweets or drop the idea of using Twitter.

Lack of message broadcast could be one of the biggest disadvantages of Twitter for business owners. Twitter uses this strategy usually to keep spammers at bay. The restriction of sending direct messages to only one user at a time is among the leading disadvantages of Twitter. If you want to send a relevant message to a specific group of followers, you have an extra piece of work.

Beware, promoting your business too often can also land you in trouble, which would be considered spamming, according to Twitter. Once your business is on Twitter, the behaviour of that particular handle gets scrutinized, and if that is too disturbing for the audience disinterested in your product, they can negate your business’ reputation even without your knowledge.

Twitter is easy and fun, but it comes with many limitations when you have lengthy posts or want to speak freely and dauntingly. Recently, the platform has been in controversies for allowing Indian users to post unscrupulous content. 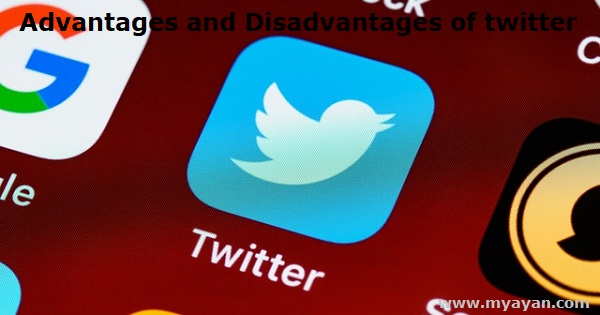 Because there is a 280-character limit on Twitter posts, users must communicate quickly. Users are not permitted to upload videos. A daily maximum of 1000 tweets is allowed.

1. Wider audience reach- The huge number of users on Twitter might include your target consumers. Hashtags may help you connect with an audience interested in a certain subject or location.
2. Deliver customer care- The platform permits immediate two-way communication between you and your customers.

As with other social media sites, checking Twitter might be habit-forming. It may develop into a habit you turn to whenever you're not busy with anything else. A Twitter addiction may not be as problematic as a drug addiction, but it's still something you don't need in your life.

Which celebrities are not on social media?