Pros and Cons of Colonialism 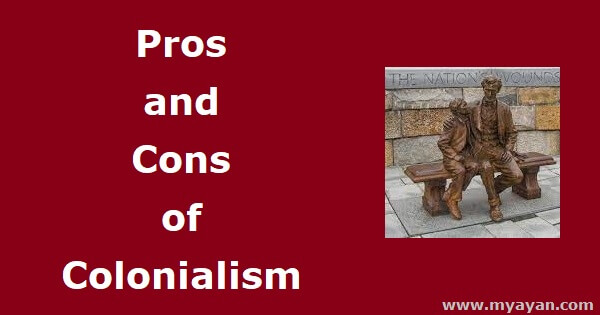 Many pros and cons of colonialism are contentious because colonial domination entails complete control over a country, a needy group of people, or a nation. The colonized countries in this period were mostly African nations that relied on the developed country's economies. People's way of life was easily taken advantage of during colonization. Colonialism was gradual by nature. It started in Europe and subsequently expanded to many parts of the world.

Even so, the primary goal of the colonizers was to take advantage of the people's labor from those states to grow their economies substantially. As a result, most Africans were kidnapped and brought to the nations of conquest, where they became enslaved people in a foreign nations.

Colonialism is the policy or practice of a country seeking to extend or retain its authority over other people or territories, generally to develop or exploit them economically. In colonization, colonizers may impose their religion, language, economics, and other cultural practices on indigenous people. Foreign administrators rule the territory in pursuit of their interests, seeking to benefit from the colony's resources. Many types of developmental reforms are still considered the pros of Colonialism.

The motives for colonization are varied but are often motivated by factors such as power, glory, and wealth. With technological advances and improved transportation during the Age of Discovery in the 15th and 16th centuries, Europeans established colonies further away from home. This led to increased competition for resources and territory, and the establishment of colonies became increasingly linked to military conflicts.

During the 19th century, colonialism expanded rapidly as European powers scrambled for control of Africa and Asia. This process was often brutal, with indigenous peoples displaced, oppressed, and exploited. In the late 20th century, as colonists began to demand independence and self-determination, many colonial states granted sovereignty to their former colonies. However, some aspects of colonialism, such as economic exploitation and cultural imperialism, continue in the post-colonial era.

What are the Pros of Colonialism?

The British rule certainly brought some developments to the society. Here are some of the pros of Colonialism to note.

One advantage that colonialism brought was the improved healthcare system. When the Europeans came, they brought with them better medical facilities and practices. This helped to greatly reduce the mortality rate and improved the population's overall health.

One of the major pros of colonialism was the improved infrastructure. The Europeans built roads, bridges, and railways, which made transportation much easier and allowed for economic development.

The introduction of new ideas and technologies by the Europeans led to increased productivity and trade growth. This led to an overall improvement in the standard of living.

5. Restoration of Women's Rights is among the pros of Colonialism

Apart from that, the era of colonialism benefited women since they were primarily restored due to prejudice and assaults. As a result, women began to take control of their lives. Men who clung to old customs and beliefs in African society exploited the ladies, considering their possessions. Women were not permitted to speak out in public places. Any woman who could express her thoughts freely would be subjected to severe harassment by the male inhabitants present.

Eventually, when the colonialists arrived, they noticed how women had been deprived of their rights and subjected to harsh mistreatment and bodily assaults. Women and men were subsequently given nearly equal rights, assuming that all genders were people.

What are the Cons of Colonialism?

Many events from the colonial period still have a negative impact today. Many people were subjected to maltreatment, slavery, forced labor, and even death at the hands of colonial rulers' cruelty. The following are some of the cons of colonialism:

One of the biggest drawbacks of colonialism was the environmental destruction that took place. To extract resources, the Europeans often engaged in activities such as clear-cutting, which led to widespread deforestation. This harmed the environment and the local ecology.

Another demerit of colonialism was the practice of forced labor. The Europeans often required the indigenous people to work in their mines and plantations. This resulted in exploitation and abuse.

Colonialism also led to cultural imperialism. The Europeans imposed their own values, beliefs, and way of life on the indigenous people. This led to the loss of traditional cultures and customs.

4. Economic Exploitation was among many cons of Colonialism

The Europeans often extracted resources from the colonies without contributing to their development. This led to poverty and inequality.

The colonies' people, now known as nations, had a long history of harmony before their conquerors invaded. However, when their countries were taken over in the name of colonization, it marked the start of endemic warfare and conflict. All these aspects of colonialism disrupted an extended period of calm among the countries. These all can be added to the cons of Colonialism.

The severe labor that Africans engaged in on the plantations of the colonial rulers exposed them to new diseases such as yellow fever and malarial fever, which harmed their health and immunity. Sadly, the Europeans would occasionally abandon the sick Africans who worked for them, die due to their lack of medical knowledge, establish what these illnesses were, and discover treatment procedures.

It is evident that colonialism had both benefits and drawbacks for the colonizers and the colonized. The pros and cons of colonialism are still being debated by historians, sociologists, and other scholars to this date.

What were 3 positive effects of colonialism?

The Romans, Greeks, Byzantines, and Egyptians have all been credited. According to some historians, medicine, education, improved infrastructure, Christianity, and boundaries were among the positive aspects. Europeans' introduction of Western medicine aided the increasing number of Africans. In addition, Africans were introduced to formal education by Europeans.

What are the positive and negative effects of the colonization?

While the conquistadors established hospitals, they were able to decrease infant mortality and encourage vaccination and disease prevention. However, while the colonizers introduced beneficial changes and innovations, many people had little or no resistance to the diseases they carried from their own countries.

What is the major impact of colonialism?

As a result of colonialism, some parts of Europe developed economically, and others declined. Colonialism did not, however, only affect the countries that carried out colonization. Instead, it had a significant influence on the societies that were subjugated.

Who benefited from colonialism?

Everyone in British society benefited from colonialism, except those who did more than others. Shareholders and investors in colonial businesses are divided into four categories according to their portion of the spoils: Colonial administrators working in the colonies.