Advantages and Disadvantages of Direct Democracy

Direct Democracy or Pure Democracy is the government form where the public decides policies without intermediate representatives or delegates. Most of the democracies found worldwide are representative democracies in which the public votes to elect their representatives who enact policies for the public. In a purely democratic government, the public signs any law or policy which further decides that particular petition has to be adopted as law or not. Switzerland is an example of this type of public voting, which grants its citizen's veto power in policymaking. This type of government may have its limitations, especially when the public has to decide directly. The Advantages and Disadvantages of Direct Democracy further highlight each point in favour and against this form of government.

In the United States, Vermont has arranged direct town meetings for local public affairs for over a century. It is one of the oldest examples of direct democracy in the US. Several schools follow the direct democracy method to resolve disputes and make school policy decisions.

The votes of both the students and staff are considered equal in making any laws for the school. To understand the concept completely, various pros and cons of direct democracy are provided below.

What are the Advantages of Direct Democracy?

Although the participation of representatives is crucial in most of the found democratic nations, the idea of providing power to the common public has several benefits. When a public decides its representative, it assigns a person to take the community as a whole. When the common public does not want a law to be passed, they show their disagreement by protests, but the complete control is under the Parliament. The advantages of Direct Democracy show it can be beneficial.

The best thing about choosing laws for yourself is the transparency it brings between the government and the public. Now the public has the power to choose what is wrong and what the mass thinks needs to be done.

In this type of government, government accountability towards the masses increases and the public cannot be ignored. However, many laws and policies are not supported by the mass but are still enacted to favour the minority. The power in such cases comes to the majority, and if the mass can act as one, the benefits of such a government can be enjoyed.

Apart from their social and work-life routine, a direct democracy demands participation from the mass in every decision. Sometimes this can lead to ending up without result as more people may not be able to decide, or they might not be aware of the policies such as criminal laws. But deciding as a mass can be affected by various reasons.

Once the mass has decided on any policy by 100%, the acceptability will increase, which is not possible. Yet, it is better than the law being enacted and 90% of the population disliking it. Therefore, if the most important problems are to be considered first, there is a possibility of success of this technique.

5. Public Assurance is one of the notable advantages of direct democracy

When the public is given the right to decide, they have the assurance that justice will be served, and the things that are not acceptable to any public can be punished. However, the information available may or may not be authentic and can be influenced by several factors.

What are the Disadvantages of Direct Democracy?

The idea behind the implementation of direct democracy is to provide the full public control over the policies and the choice to make laws for themselves; the practical results are far way different. The country is always full of problems, and spontaneous actions are needed to control the overall results in the direction of growth. If the public is asked every time a problem arises, the resulting action is delayed and is sometimes not reached. Other various disadvantages of Direct Democracy surround this form of government with many questions.

One of the failures of the system is its capability of arriving at a decision. The mass voting policy can lead to less public participation and hence arriving at no-decision. However, this can lead to the solution of important issues first if used correctly.

When the government is enacted, it is responsible for the overall growth of the economy and removing problems arising in society. Moreover, foreign relations must be maintained, with different decisions being taken to maintain peace between nations. A large number of issues are hence divided into groups and solved by experts.

Complete participation is needed, and societies with less population are capable of acting in such a democracy. But, unfortunately, most of the time, the mass is not available and is busy achieving their own goals.

However, this is an advantage of this democracy but achieving it in many people is not possible. There will always be people who are not available within the specified period of voting.

One of the most important reasons it is not suited for society is that in a pure democracy, the welfare of the minority will not be possible. Whatever the majority decides, it will be enacted as law and discrimination of a large population will be seen.

Conclusion on Pros and Cons of Direct Democracy

Pure democracy is only seen in a few nations and towns, but the history of this type of democratic behavior is found up to Romans and Athens. The problems of this are noticed. Hence, our modern societies are built on mixed democracies where equal participation is there yet the final decision is in the hands of people authorized by the mass. 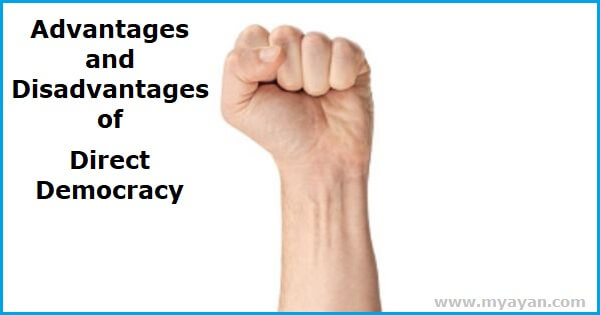 What are disadvantages of direct democracy?

A pure democracy is a form of direct democracy. All people have an equal voice in the debate. As a result, every single aspect of society is voted on by all members. This can be problematic when a society grows to such an extent that it's impossible to keep track of all the votes or forge an agreement among the citizens.

What happens in a direct democracy?

In a direct democracy, the public decides on policy matters without the help of intermediaries or spokespeople. In contrast, in a representative democracy, people vote for representatives who carry out policy ideas. A compulsory referendum forces politicians to put forth legislation that is submitted to a binding popular vote.

Who rules a direct democracy?

A pure democracy is a system of direct democracy in which representatives do not make the decisions. The people vote on all matters. When a budget or legislation needs to be passed, it goes to the people first.

Is the US a direct democracy?