Advantages and Disadvantages of Black Wheat: Black wheat has been in the news and storming social media for the past two years. Many people are still unfamiliar with this term "Black Wheat", yes, it’s not buckwheat, but black wheat. Really? Well, practically, yes. Here are some facts and benefits of black wheat that will turn you curious or. This hybrid form of wheat originates from the farming states Punjab and Haryana of India. What more do we expect from this freshly invented crop? Let’s put some light on the facts, including the benefits of black wheat.

What is black wheat benefits and where did it come from?

People have introduced to this species of wheat a couple of years ago when a post went viral on social media, stating that an India-based Biotechnology Institute deduced a species of grain after research of seven long years. For the first time, news that went viral on social was found to be true finally. The black wheat was produced in the National Agro-food Biotechnology Institute University, Mohali Punjab, in 2017. As per the latest news, the institute has a patented Black Wheat now.

Black wheat is said to have more nutrition than regular wheat grains, which makes it more helpful for people with diabetes, obesity, and heart diseases. Moreover, it is produced in the ordinary weather conditions that no farmer has to follow rigorous or complicated instructions to generate maximal output.

How is Black Wheat different?

What makes black wheat different in color is the pigment named "Anthocyanin" that also determines the colors of fruits and vegetables. The concentration of these pigments determines the color of other natural edibles. Regular wheat has a 5ppm (Parts-Per-Million) concentration of anthocyanin; on the other hand, black wheat grain is reported to have around 100-200ppm of anthocyanin (exact figures: 140 ppm). This makes black wheat, scientifically, a healthier option. These Anthocyanins are the naturally occurring antioxidants that develop in a field at the time of grain filling, hence enriching the wheat with loads of nutritional value.

Some Benefits of Black Wheat - Explained

It is doubtless to note the benefits and positive effects of black wheat on health. As concluded in the reports by Doctor Monika Goyal, NABI, Mohali, this species of wheat will tackle the problem of malnutrition in India. Following are some other benefits of black wheat.

The presence of Anthocyanin in higher amounts protects from you from inflammatory diseases and treats High Blood pressure, cold, urinary tract infections, and heart diseases. Anthocyanin controls heart diseases and improves cholesterol levels and blood sugar metabolism in diabetic patients. According to a study published in the Journal of Agricultural and Food Chemistry 2008, Anthocyanin also prevents obesity.

Besides, Anthocyanins, black wheat also contains more antioxidants than regular wheat, which control the antibodies and free-radicals in our body. These antioxidants keep up the immune system by providing protection from DNA damage and lipid peroxidation. The highly anti-inflammatory properties of black wheat boost the production of cytokines that regulate the immune responses.

Black wheat is effective in protecting eyes from vision loss and any damage due to free radicals. Black currants also contain high amounts of Anthocyanin, which also improves night vision. Lack of nutrition facts due to lower intake of Anthocyanin leads to night blindness. Black wheat is the solution to all the problems related to eyes among adults.

The production of black wheat is undoubtedly going to be beneficial for farmers who produce in higher amounts. The growth and production are expected to rise concerning the conclusions derived from the ongoing research. Meanwhile, the institute is encouraging farmers to produce as much black wheat to maximize the production and eradicate malnutrition and raise their income.

Side effects or Disadvantages of Black Wheat

2. The market price will be higher

As the production is not enough to incur the supply and demand, the cost of black wheat to the general consumer will be twice or thrice as that of regular wheat. This also brings us to the fact that people having financial difficulties will still not be able to get nutrition facts for themselves and their families. 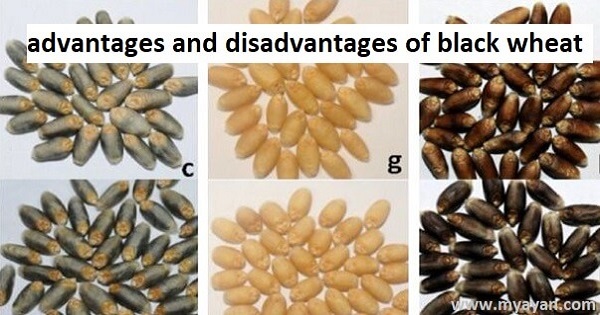 What are the benefits of Black Wheat?

Black Wheat treats several ailments such as Obesity, eye diseases, and boosts immunity apart from preventing cancer. It's highly rich in Anthocyanin, Iron, and Zinc which multiplies its effectiveness. If included in the diet, Black wheat can be the answer to curb Malnutrition.

Where is Black Wheat found?

Black Wheat was produced at NABI (National Agro-Food Biotechnology Institute) Mohali, Punjab (India) in 2015. The other two variants of black wheat are Purple and Blue Wheat. The institute has patented black Wheat and its production. Besides Punjab, Haryana, Madhya Pradesh, and Himachal Pradesh have also been introduced to black wheat farming and production.

How is Black Wheat farming helpful to farmers?

Production of Black wheat can generate more revenue for farmers which they can easily earn for farming and production without following any complicated or rigorous farming methods.

What are the disadvantages of Black Wheat?