Pros and Cons of Euthanasia

Euthanasia is a highly controversial subject, as it involves ending the life of another individual. The debate has long raged on whether or not euthanasia should be legal and what circumstances would warrant such an act. On the one hand, some argue that euthanasia can relieve those suffering from terminal illnesses or in tremendous pain and wish for death. On the other hand, opponents contend that allowing euthanasia can lead to abuse and open the door to unethical practices.

Euthanasia, also known as mercy killing, is the intentional ending of a person's life to relieve pain and suffering. The term euthanasia can refer both to the act of taking someone's life and to the process of allowing someone to die naturally by withholding medical treatment. Euthanasia is a widely debated topic due to its ethical implications, with proponents arguing that individuals should control their own death. In contrast, opponents argue that it is an immoral practice that violates healthcare principles such as autonomy and non-maleficence (not causing harm).

Before proceeding to the pros and cons of Euthanasia, let’s find out about its legal status globally. The legal status of euthanasia varies from country to country. In some countries like Belgium, Luxembourg, Canada, and Colombia, active euthanasia has been legalized for some instances. In other countries, like the Netherlands and Switzerland, assisted suicide is legal under certain circumstances. In most countries, however, euthanasia remains illegal.

Proponents of euthanasia argue that it relieves individuals suffering from extreme pain or terminal illnesses and allows them to choose when they want to die with dignity. They also argue that withholding medical treatment can be an act of mercy if a person's life has become unbearable due to incurable illness and severe disabilities. On the other hand, opponents argue that euthanasia devalues human life and can lead to abuses such as non-voluntary euthanasia or physician-assisted suicide. They further claim that allowing people to end their lives prematurely denies them their right to life and violates healthcare principles such as autonomy and non-maleficence.

Euthanasia remains controversial and highly debated, with no clear consensus on its ethics or legal status in many countries. Disagreements complicate the debate over the definition of euthanasia, religious beliefs, and personal values. Nevertheless, it is essential to consider both sides of this complex issue to ensure that everyone's right to life is respected while respecting individual autonomy and minimizing suffering.

Euthanasia also raises wider questions about how we view death and dying in our society and what role medical professionals should play in end-of-life decisions. It has become increasingly important for individuals to be informed about their options at the end of life to make the best decisions for themselves and their loved ones. Euthanasia and assisted suicide are both currently illegal in all 50 states of the United States. However, assisted suicide is legal in 10 jurisdictions within the US: Washington, D.C., and the states of California, Colorado, Oregon, Vermont, New Mexico, Maine, New Jersey, Hawaii, and Washington.

What are the Pros of Euthanasia?

Since it can be such an emotionally-charged and sometimes contested topic, there are several benefits and drawbacks. First, let's talk about the pros of Euthanasia.

In some cases, Euthanasia may be the only option for someone suffering from an incurable illness or condition. In these situations, Euthanasia can relieve patients and their families so they do not have to continue suffering through a painful and drawn-out death.

Euthanasia also upholds patients' autonomy by giving them the right to choose when they want to die. This helps ensure that individuals can make decisions about their own life and death, providing peace of mind in difficult times. If a patient willingly opts for this option, he/she should be able to decide what the best option is. That’s why it can be added as one of the pros of Euthanasia.

For people with terminal illnesses, Euthanasia can offer relief from unbearable pain or suffering. Withdrawing medical treatment or allowing natural death can be an act of mercy if a person's life has become unbearable due to incurable illness or severe disabilities. Since it’s not only the deal with the patients, their family members suffer equally.

4. Cost-Savings are reasonable pros of Euthanasia

Euthanasia may also have financial advantages as it can help reduce medical costs for individuals unable to afford long-term care. This is especially beneficial for those of lower socio-economic statuses and could help ease the burden on healthcare systems worldwide.

5. Sense of Control over Ending Life

Euthanasia provides a sense of control for people who wish to end their own lives rather than live with pain or suffering. It allows them to decide when they would like to die instead of having that choice taken away from them.

What are the Cons of Euthanasia?

There are lots of contradictory issues associated with mercy killing and that’s believed to happen everywhere. Here are some of the main cons of euthanasia to discuss.

One of the main arguments against Euthanasia is that it can create a slippery slope where non-voluntary or even involuntary euthanasia is more widely accepted. This could lead to vulnerable individuals being taken advantage of and their right to life denied.

It may also be seen as unethical because it goes against some of the critical principles in healthcare, such as benevolence and non-maleficence. Many professionals argue that medical professionals should focus primarily on protecting life and not taking it away.

For many religious individuals, allowing for the premature ending of someone's life is contrary to their religious beliefs. This can create a sense of moral conflict for those against Euthanasia, making it difficult to support its legalization. Violation of religious beliefs is one of the debatable cons of euthanasia as life and death are in the hands of God.

Euthanasia may also lead to quality of life issues where individuals view death as the only option for escaping pain or suffering. This could lead to people feeling pressure to end their lives prematurely rather than accessing medical care or emotional support that could help them cope with their situation.

5. Potential Abuse is among the devastating cons of Euthanasia

Final thoughts: Pros and Cons of Euthanasia or Mercy killing

Mercy killing is a controversial topic that has many pros and cons associated with it. It can be viewed as both beneficial and detrimental depending on the situation, and individuals must weigh their options carefully before making any decisions. Ultimately, it is up to each individual to decide if they believe in the practice of Euthanasia or not. 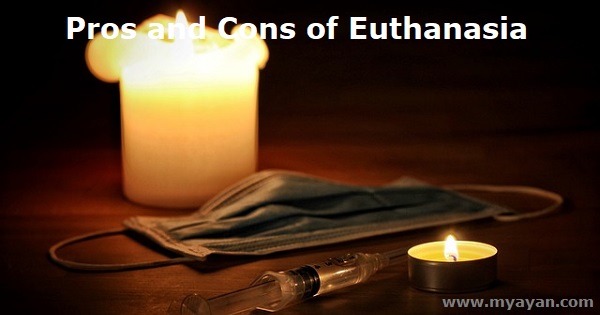 Is Euthanasia legal in the United States?

Euthanasia is illegal in most states in the United States, although some states have made exceptions for some instances. It is essential to check with your local laws before considering Euthanasia as an option.

What are the main arguments against Euthanasia?

The main arguments against Euthanasia include the potential for creating a slippery slope where non-voluntary or even involuntary euthanasia is more widely accepted, unethical treatment of individuals, violation of religious beliefs, and potential abuse.

Is there a difference between assisted suicide and Euthanasia?

Yes, there is a difference between assisted suicide and Euthanasia. Assisted suicide occurs when a person provides the means or information for someone to end their own life, while Euthanasia is when a medical professional actively takes steps to end the patient's life.

Are there any other options besides Euthanasia?

Many other options can be considered through palliative care and hospice services. These can help individuals live out their remaining days in comfort and dignity, giving them access to physical, emotional, and spiritual support.